My Mind is Working Overtime—Towards an Integrative Perspective of Psychological Detachment, Work-Related Rumination, and Work Reflection
Previous Article in Journal

Abnormal climate phenomena appear in every corner of the world due to global warming, resulting in not only melting glaciers and rising sea levels but increasing the frequency of natural disasters such as droughts, floods, and typhoons. Abnormal climate has led to a situation where human life as well as the ecosystem is threatened. Because of global warming triggered by the increased use of fossil fuels with the industrial development, the climate is changing the environment such that extremely cold and hot temperatures are deepened and the frequency and intensity of lightning and typhoons are increased, which adversely affects electrical equipment [1,2,3]. Abnormal climate phenomena such as sea level rise and changes in temperature and precipitation patterns due to continuous climate change are increasingly affecting various living environments and systems such as ecosystems, transportation, energy supply and demand, and infrastructure [4,5].
In order to improve the predictability of electrical hazards, it is necessary to develop technologies that can respond to environmental changes by identifying, evaluating, and analyzing the risks through the analysis of the vulnerability of electrical equipment according to climate change [6].
In this paper, we statistically analyze the impacts of electrical accidents (fire, failure, etc.) in South Korea, arising from global warming manifested in abnormal climate conditions such as high temperatures and localized heavy falls, on electrical equipment, and then suggest and predict the risk rating of electrical equipment based on this analysis.

2. Statistics on the Causes of Electrical Equipment Accidents Due to Climate Changes

The number of electrical fires per 100,000 people in each region according to five different causes of electrical fires was analyzed as shown in Table 4. These data are based on ‘Statistical Analysis on the Electrical Accidents’ by Korea Electrical Safety Corporation. From Table 4, we made a table for a relative risk rating (Table 5) by setting the maximum value as ‘very high’, the minimum value as ‘very low’, and the middle value as ‘moderate’. Based on the risk rating in Table 5, the risk rating for electrical fires by cause for each region can be represented as in Table 6.
There are fewer electrical fires in Seoul and Busan despite huge populations. In particular, there are lots of fires in Gangwon (Chuncheon city) relative to population size, which might be affected by the lack of disaster prevention infrastructure such as firefighting facilities. As shown in Table 6, there are four cities (Incheon, Daejeon, Chuncheon, and Jeju) with at least two ratings higher than ‘high’, and five cities (Daejeon, Gwangju, Cheongju, Chuncheon, and Jeju) with at least one ‘very high’ rating. Busan is the only city with no ‘high’ or ‘very high’ rating. While Daegu has the lowest average risk rating, Chuncheon has the highest average risk rating.
The charts from Figure 11, Figure 12, Figure 13, Figure 14, Figure 15 and Figure 16 represent the risk rating by cause from Table 6 using a spider web chart. There are five different categories of causes for electrical fires. Each region has different causes of the highest and lowest risk rating. Seoul and Busan have relatively low risk rating comparing other regions. Daejeon has three factors with the rating higher than level 4 (very high risk) while Busan has no factors with higher than level 4.
So far, we have analyzed the annual electrical fires in each region and correlated them with monthly climate change variables. In addition, annual fires by cause in each region are analyzed. By integrating electric fires by region into the monthly climate variables, accumulated for 10 years (from 2006 to 2015) of statistics, the average number of electrical fires in each region in each month can be represented. Figure 17 shows the monthly electrical fires by region in the form of matrix diagram [12] that indicates the correlation between the climate variables and the electrical fires. This diagram shows the risk level of electrical fires in any month of the year in each region. The redder the color in the matrix, the higher the risk is. On the other hand, the more yellow the color is, the lower the risk is.
If this matrix is made based on 10 years (from 2011 to 2019) of statistical data, it can be predicted that the risk level of any area in any month of the next year after that period will be similar to that of this matrix. For example, in 2020, most regions are predicted to have a high fire risk level from July to August and December to January. The risk level for electrical fires in Gangwon is likely to be particularly high through the entire year compared to other regions.

This research was supported by Wonkwang University in 2017. 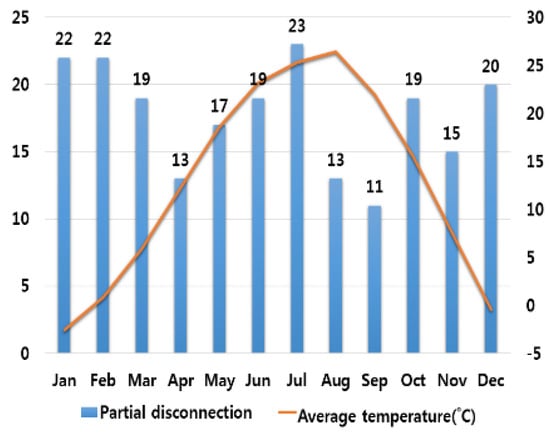 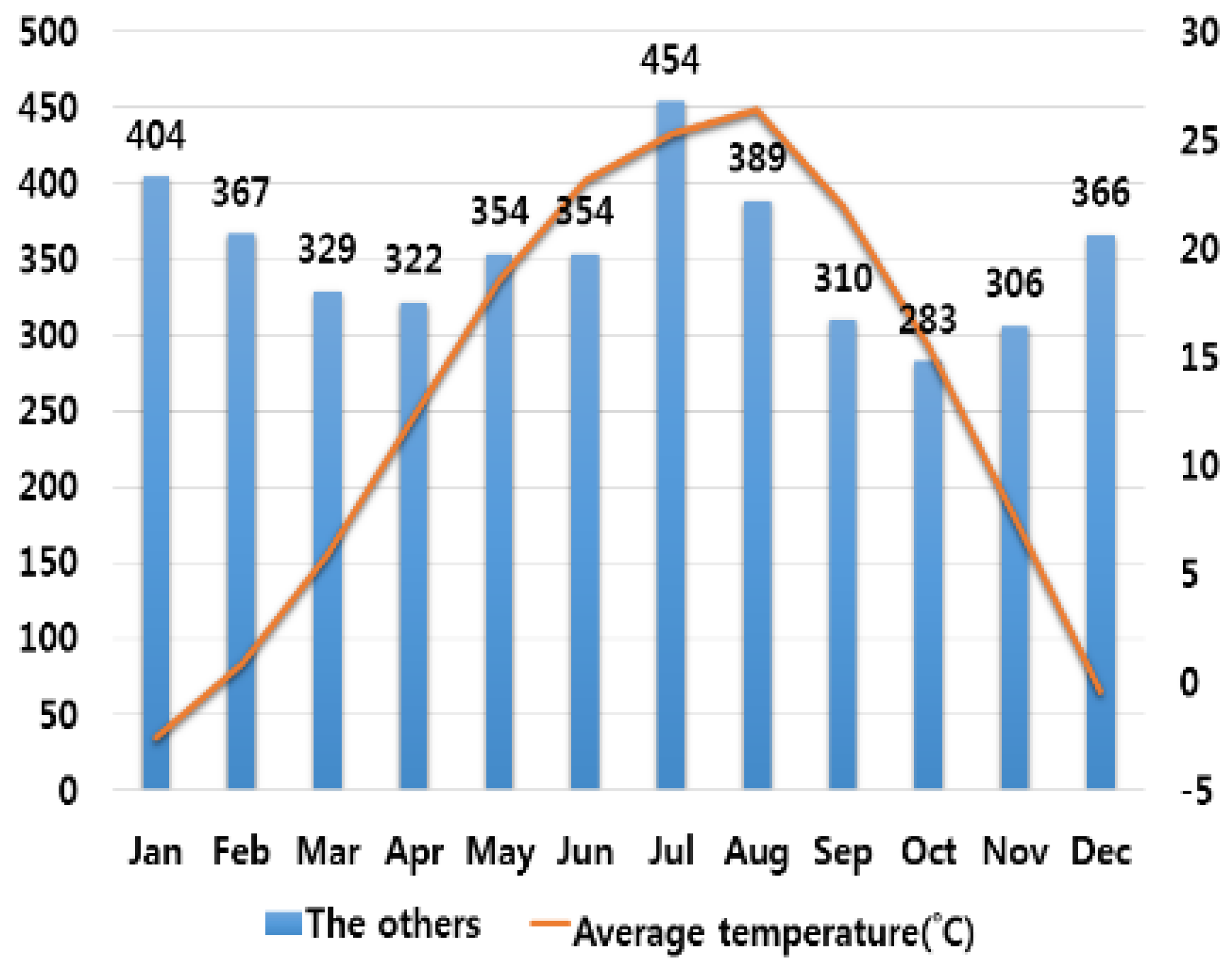 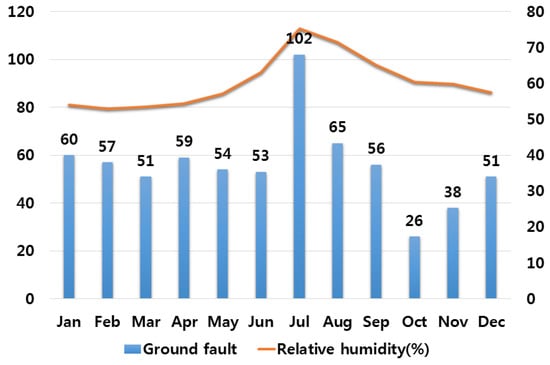 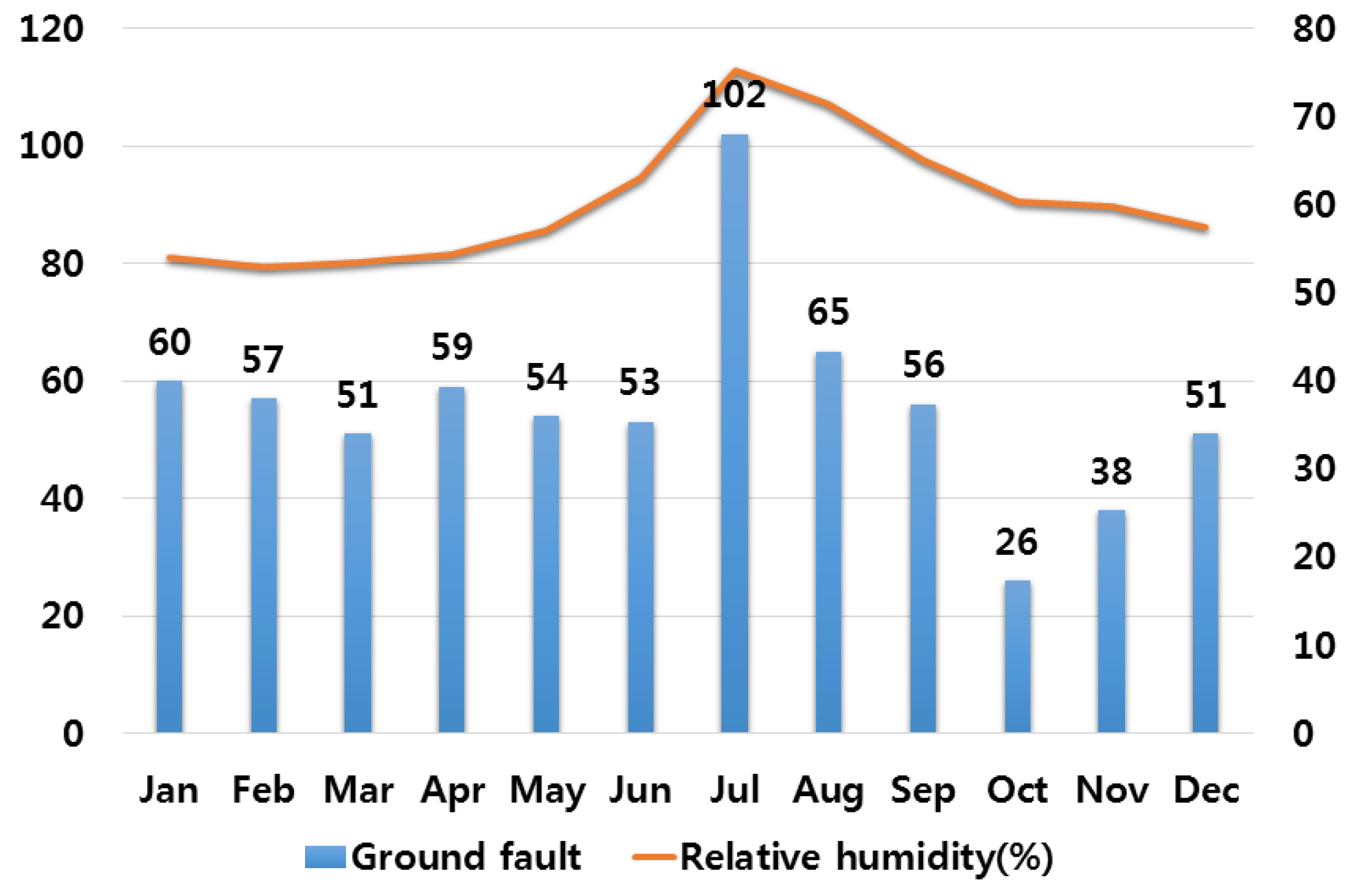 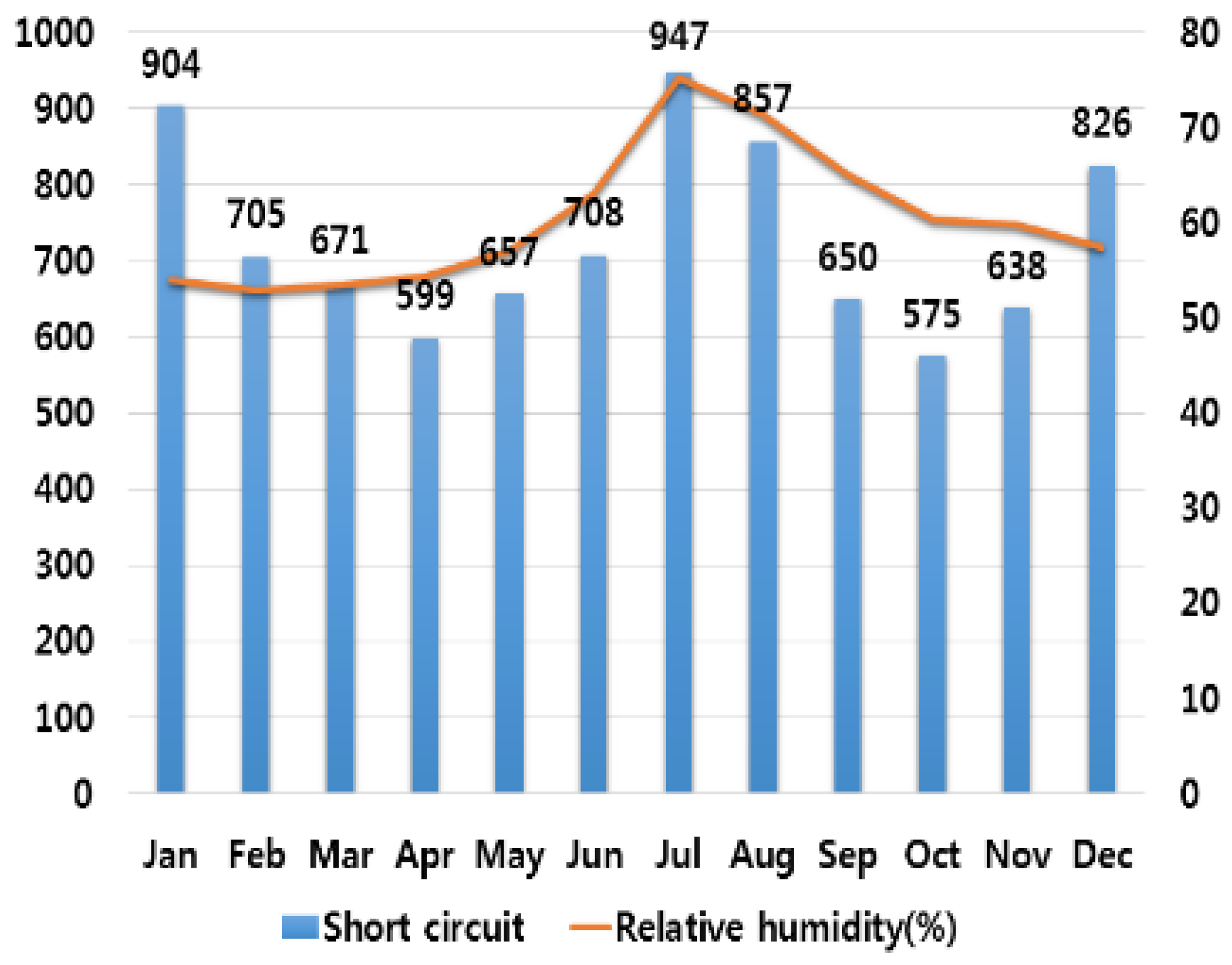 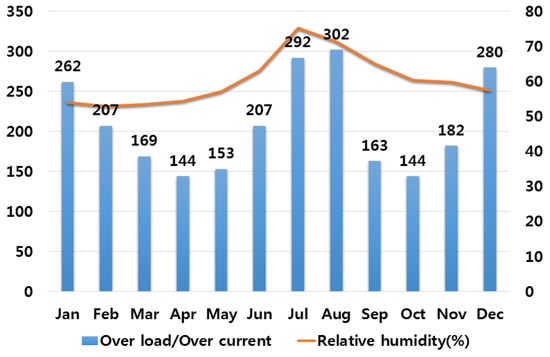 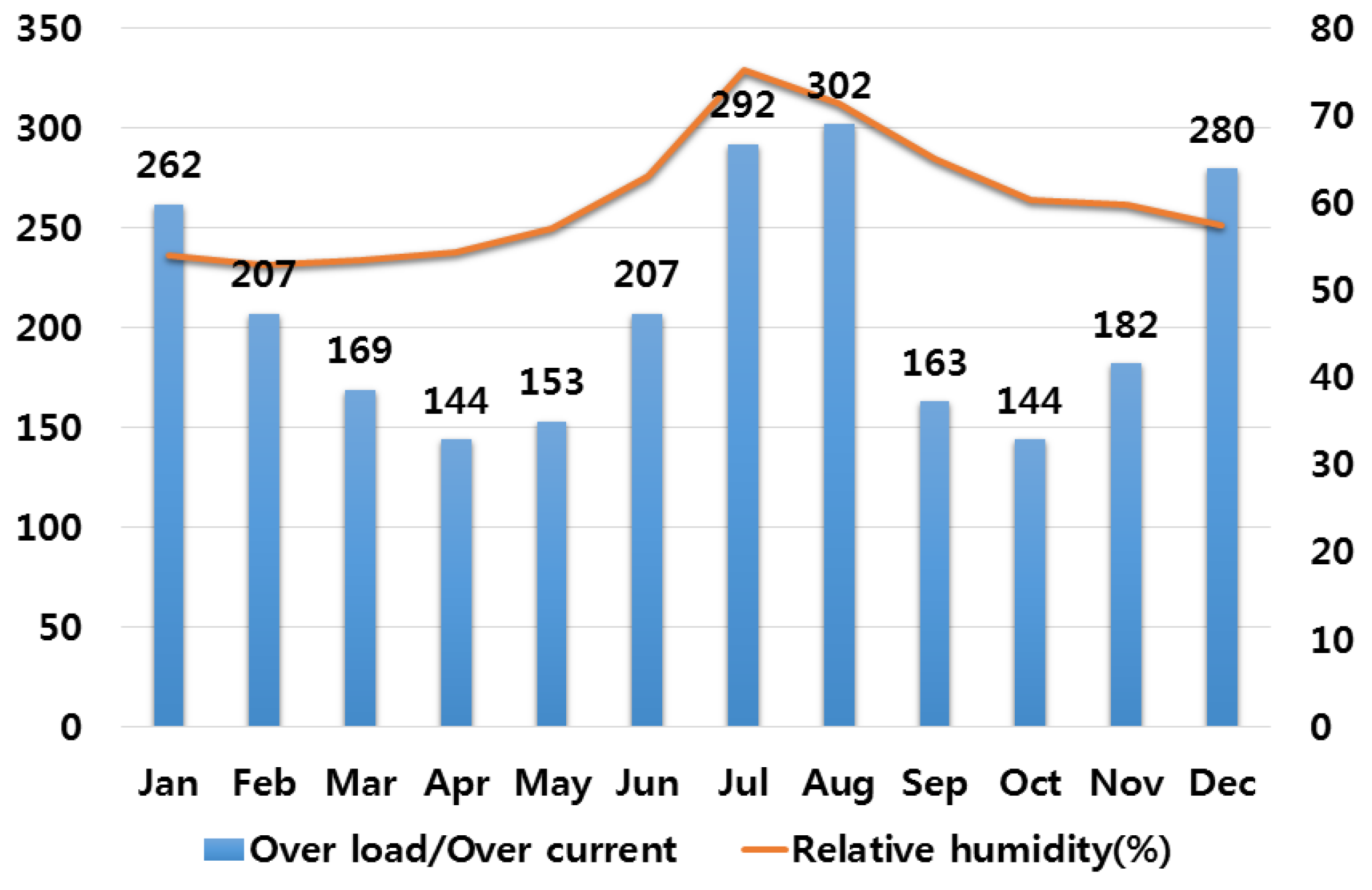 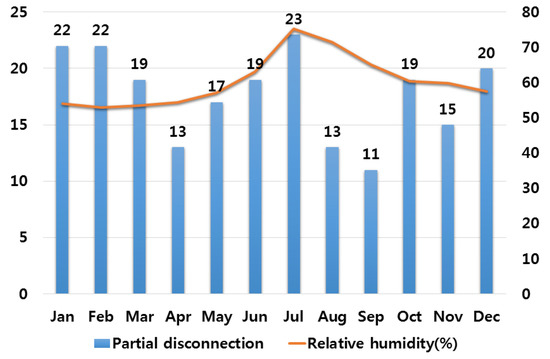 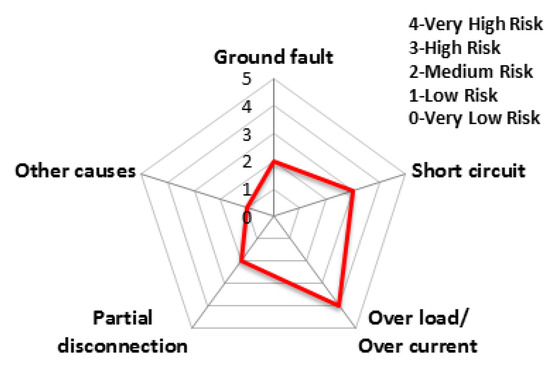 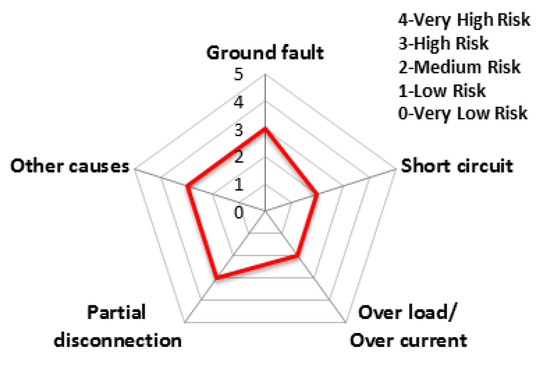 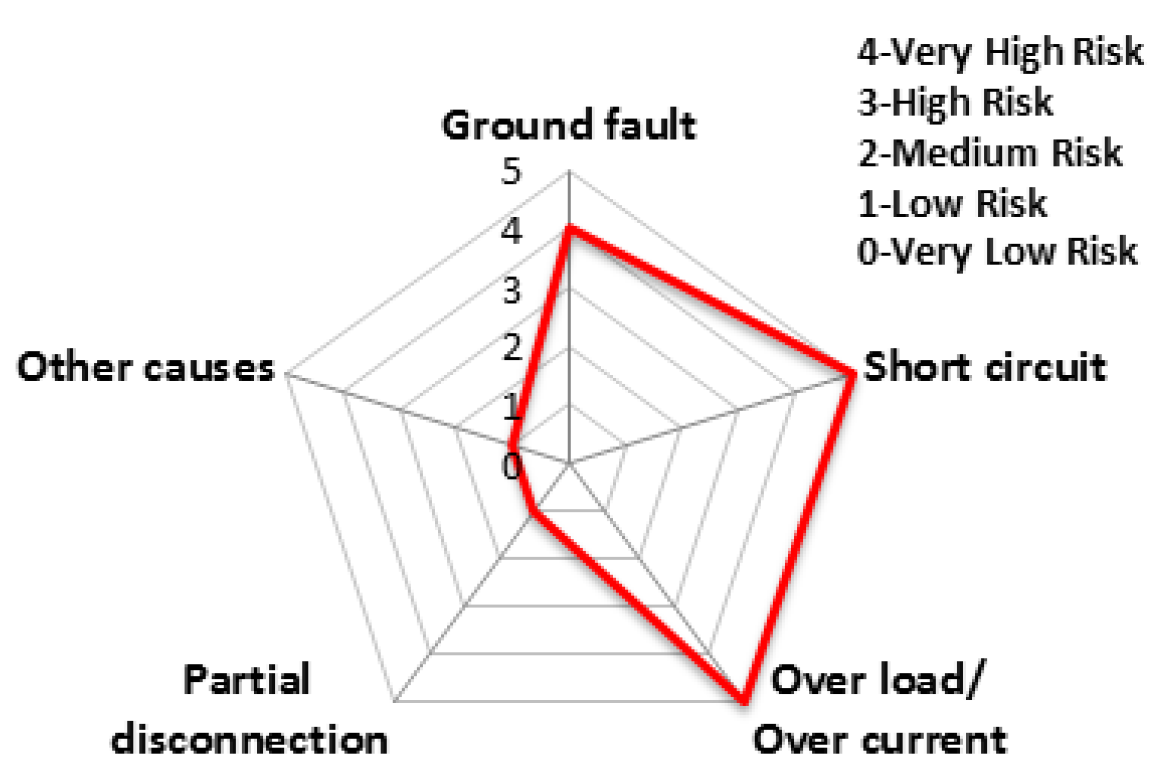 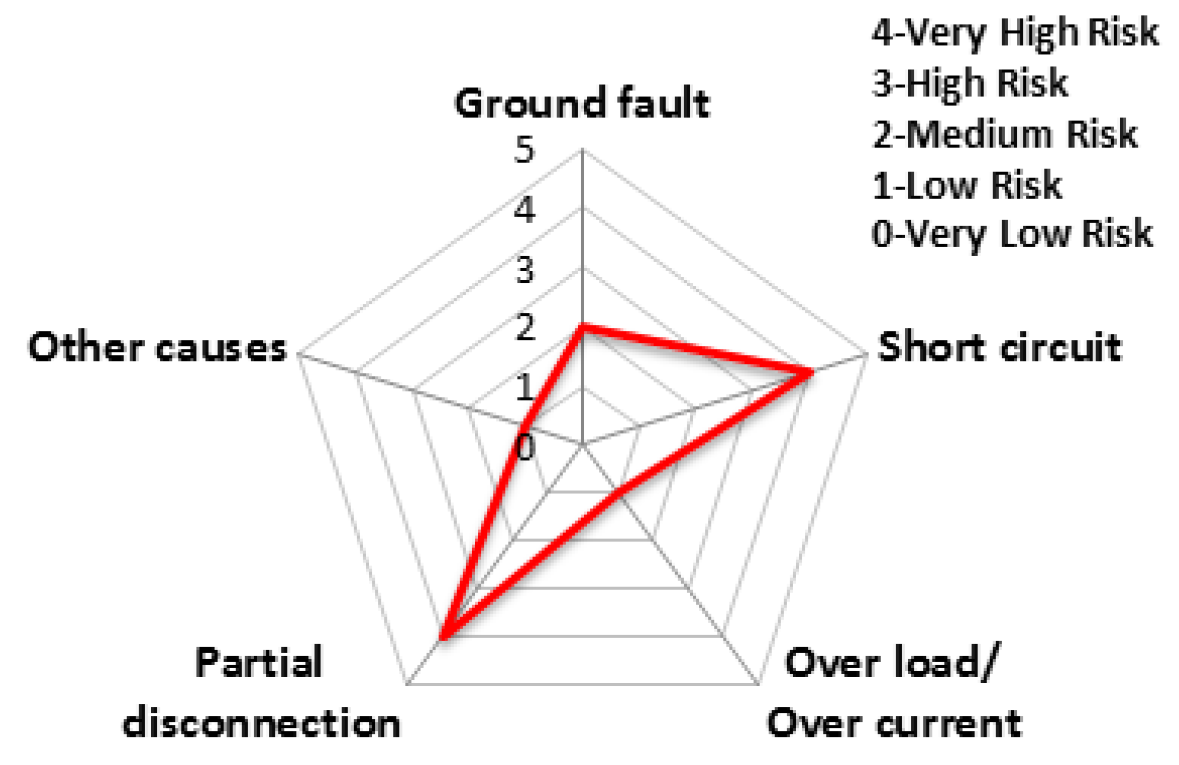 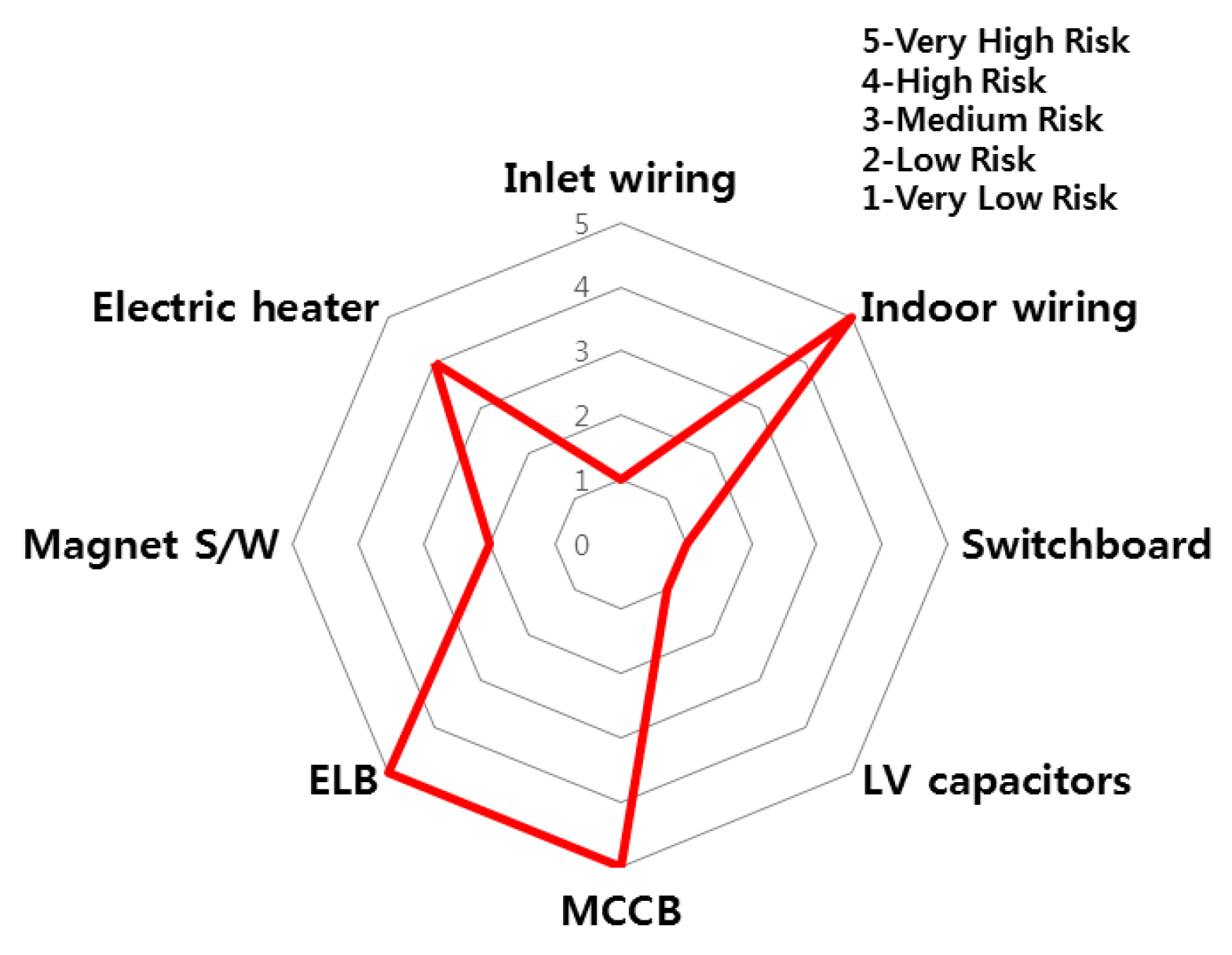 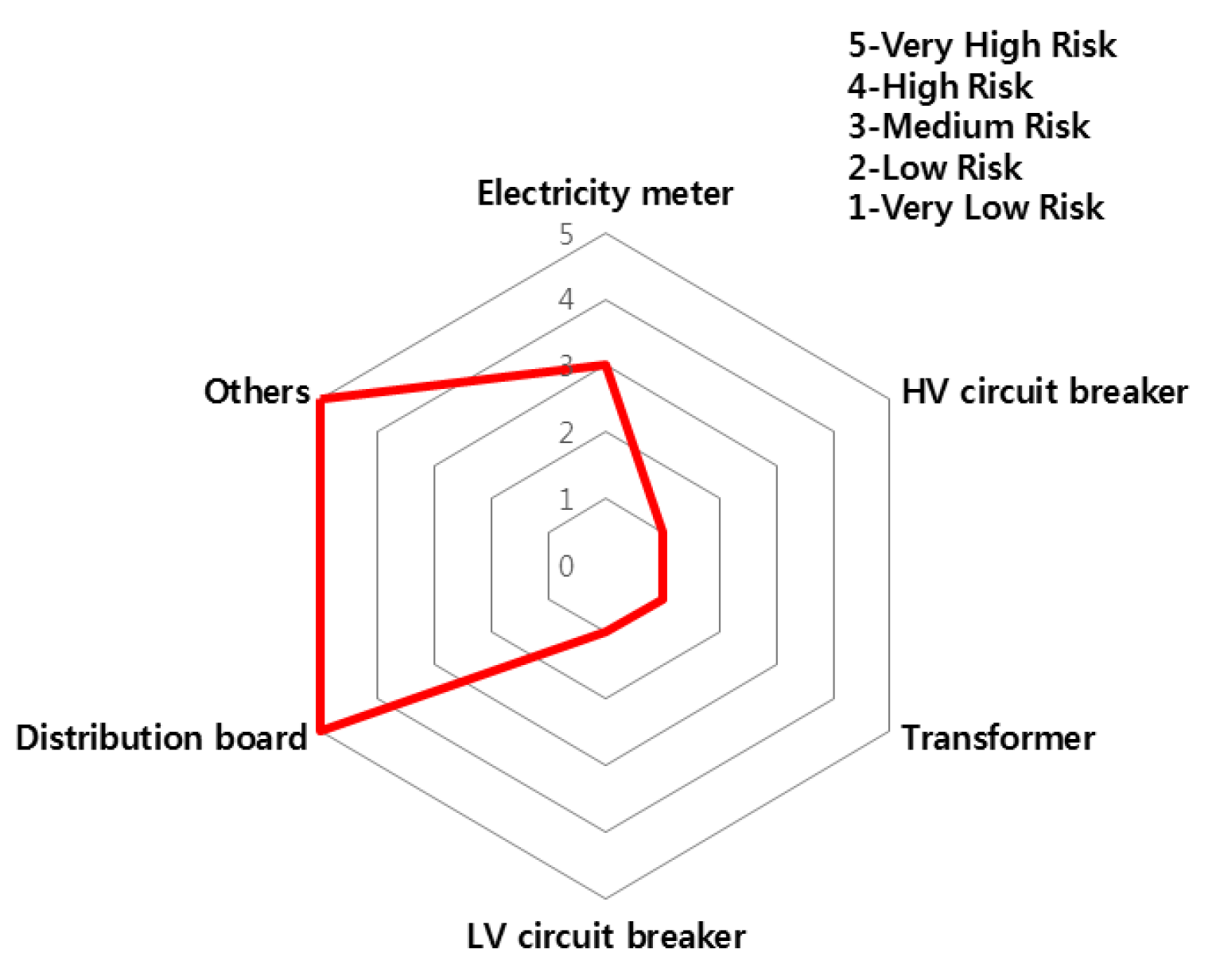