Objective: We aimed to assess and compare cardiovascular disease (CVD) risk factors and predict the future risk of CVD among Somalis living in Norway and Somaliland. Method: We included participants (20–69 years) from two cross-sectional studies among Somalis living in Oslo (n = 212) and Hargeisa (n = 1098). Demographic data, history of CVD, smoking, alcohol consumption, anthropometric measures, blood pressure, fasting serum glucose, and lipid profiles were collected. The predicted 10-year risk of CVD was calculated using Framingham risk score models. Results: In women, systolic and diastolic blood pressure were significantly higher in Hargeisa compared to Oslo (p < 0.001), whereas no significant differences were seen in men. The ratio of total cholesterol to high-density lipoprotein (HDL) cholesterol was significantly higher in Hargeisa compared to Oslo among both men (4.4 versus 3.9, p = 0.001) and women (4.1 versus 3.3, p < 0.001). Compared to women, men had higher Framingham risk scores, but there were no significant differences in Framingham risk scores between Somalis in Oslo and Hargeisa. Conclusion: In spite of the high body mass index (BMI) in Oslo, most CVD risk factors were higher among Somali women living in Hargeisa compared to those in Oslo, with similar patterns suggested in men. However, the predicted CVD risks based on Framingham models were not different between the locations. View Full-Text
Keywords: Somalis; comparison; cardiovascular disease risk factors; Framingham risk score Somalis; comparison; cardiovascular disease risk factors; Framingham risk score
►▼ Show Figures 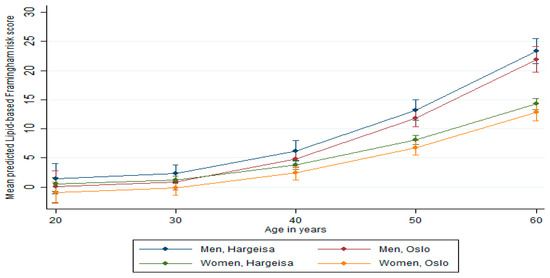