Employee Stress, Reduced Productivity, and Interest in a Workplace Health Program: A Case Study from the Australian Mining Industry
Previous Article in Journal

Four Wellbeing Patterns and their Antecedents in Millennials at Work

Nowadays, overqualification is ubiquitous across European job markets, especially in Italy and Spain, and even more so among younger employees [25,26,27]. Beyond its ubiquity, overqualification raises concerns due to its negative effects on job satisfaction. For instance, studies conducted on young Spanish and Italian employees show that overqualified employees have lower job satisfaction [9,26,28].
Some scholars explain the negative effect of overqualification on job satisfaction based on equity theory. According to equity theory, employees compare the resources they put into work (such as level of education, skills, knowledge, experience) to what they receive in return (e.g., payment, recognition, or responsibility), in order to determine their sense of fairness [9]. When they perceive that their input is greater than what they receive, they develop a sense of unfairness, and as a result, they experience dissatisfaction with their job. However, some studies have shown that, although overqualification has a negative relationship with job satisfaction, at the same time, it has a null or positive indirect relationship with mental health [10,26]. Therefore, we argue that overqualification might negatively affect employees’ job satisfaction, but not necessarily their mental health. Furthermore, a study in German firms on the effects of overeducation on productivity, comparing employees working in jobs with similar levels of requirements, observed that overqualified employees are found to be healthier and strongly work- and career-minded [29]. Therefore, we also hypothesize that:
H3:
Overqualification will mainly discriminate employees with the unsatisfied-healthy pattern from the rest of the patterns.
We test our hypotheses in a sample composed of young employees born between 1980 and 2000, typically called Millennials [30]. Knowledge about individual key outcomes such as wellbeing and health in young employees is still limited and deserves the attention of researchers and practitioners [31]. At the same time, there are approximately 1.8 billion millennials around the world. In 2018, they represent nearly 50% of the global workforce [32]. Therefore, improving outcomes for youth is fundamental to building more inclusive and sustainable societies [33], and one way to this is by promoting full and productive employment and decent work for all […] including young people […], which is part of the global agenda of the Sustainable Development Goals [34]. Figure 1 summarizes the four wellbeing patterns resulting from job satisfaction and mental health and the five antecedents we are considering.

Data were collected from a survey on the transition of young employees to the labor market, which is part of the Valencian Institute of Economic Research (IVIE in Spanish). The survey was designed to facilitate the socioeconomic and psychosocial analysis of young employees’ transition to the labor market. Participants between 16 and 30 years old who had been looking for or had found a job in the past 5 years were randomly selected for this study and then contacted by telephone. After two attempted contacts, the researchers replaced non-respondents with a randomly chosen substitute of the same age and gender. Considering the aims of this study, we focused only on respondents who were currently employed. Employees contacted by telephone were always informed of the purpose of the study and assured of the confidentiality of the data. Those who gave their consent to take part in the research were interviewed in their homes using a structured face-to-face procedure.

In all, 783 young Spanish respondents were selected for this study. This sample is representative of all the regions in Spain. As mentioned above, the ages of the participants ranged from 16 to 30 years old (Mage = 25.21, SD = 3.40), with slightly more females (52%). Most of the participants worked in the private sector (82%), and most of them had a temporary contract (58%).

To identify the four wellbeing patterns, we performed cluster analyses. One of the advantages of using cluster analysis is that unlike other methods that emphasize the relationship among variables, clustering involves sorting cases or variables according to their similarity in one or more dimensions and producing groups that maximize within-group similarity and minimize between-group similarity [44]. Therefore, to identify the four groups of wellbeing patterns, the 783 employees were clustered based on their individual levels of job satisfaction and mental health, applying a two-step cluster analysis procedure. Loglikelihood measured the distance between job satisfaction and mental health. The clustering criterion was Schwarz’s Bayesian Criterion (BIC). Finally, to balance the distribution of responses on the job satisfaction and mental health variables, we standardized these two variables to Z-scores (M = 0, SD = 1) before performing the cluster analyses.
To test our hypotheses, we employed discriminant analysis to test the unique differentiating role of stress (role ambiguity, role conflict, and role overload), job importance, and overqualification across the four patterns. We conducted a stepwise solution to remove variables that did not make a unique contribution to the predictive and discriminatory function at a probability of 0.05 or less. The stepwise criterion was minimization of Wilks’ lambda. Similar studies analyzing wellbeing profiles [45] applied discriminant analysis considering Wilks’ lambda stepwise minimization criteria, as we did in the current study. Discriminant analysis is a method used in a multi-group setting to find out if a set of independent variables (nominal and/or continuous) are related to group membership and how they are combined to better understand group differences [46]. In fact, various authors suggest the use of cluster analysis in combination with discriminant analysis for further validation of clusters [47].

We present the summary of descriptive statistics and bivariate correlations for all the variables included in this research in Table 1. Considering preliminary analyses, missing data, which can occur due to nonresponse to some questions, are a common problem in organizational research [48]. Fichman and Cummings [48] argue that improper treatment of missing data (e.g., listwise deletion, mean imputation) could lead to biased statistical inference using complete case analysis statistical techniques. However, given that we have a reasonably large sample size (n = 783), and considering that the percentage of missing data was rather small (less than 1%), we concluded that the missing data had no effect on the results of our study [46].

One of the potential limitations of the current study is related to the sample, which is limited to young Spanish employees. To make better generalizations about the four wellbeing patterns, it is necessary to document their occurrence in other contexts. However, the sample was representative of all the regions of Spain, and the independent variables (role stress, job importance, and overqualification) that we tested in this research might be applicable to millennials in other contexts, which could make the generalization of these research findings more robust. Therefore, this limitation may be at least partially neutralized because the procedures and variables we used are applicable to millennials in other contexts. In addition, to test the external validity of the study, it would be useful to replicate it with millennials in other countries.
Another limitation is related to the measurement of job satisfaction and mental health. In job satisfaction measurement, cognitive/subjective biases may affect employees’ evaluations of their satisfaction. Similarly, we assessed mental health by using the General Health Questionnaires (GHQ) in terms of a specific time period: ‘during the past few weeks…’. However, events occurring “weeks ago” may be poorly recalled, and, therefore, induce some possible inaccuracy in mental processing [3]. However, the measurements of both job satisfaction and mental health are based on well validated and accepted instruments, and so we expect cognitive/personal biases and inaccuracy in mental processing to have little or no impact on the validity of the current research findings.
One of the main aims of organizational psychology is to improve employees’ wellbeing. In this regard, our taxonomical approach provides relevant empirical evidence, facilitating the achievement of this endeavor. First, by combining job satisfaction and mental health, this study maps synergistic but also misaligned wellbeing patterns. Second, our study also provides valuable information of some personal and organizational variables related to them. In this way, our study informs organizational psychologists of when they may be improving at the same time job satisfaction and mental health, but also when this might not happen, creating misaligned wellbeing patterns instead. Thus, an important implication of our study is the provision of a useful wellbeing-pattern taxonomy from where to study and improve employees’ wellbeing.
We also identify implications for other stakeholders. For instance, our results show that it would be worthwhile for organizations to find mechanisms to track and ensure the fulfillment of their commitments to millennials. Our results show, in fact, that only a small portion of employees are in the optimal job satisfaction and mental health category, whereas larger portions are in the unsatisfied-unhealthy and misaligned patterns. At the same time, organizations should carefully consider HR policies, such as staffing, to establish mechanisms to avoid phenomena such as role ambiguity, role conflict, role overload, and overqualification. These organizational and personal phenomena have been shown to have toxic effects on both job satisfaction and mental health.
Third, the results show that job importance is an important mechanism for a sustainable young workforce. In our study, young employees who reported having high job importance were characterized by being satisfied and healthy. Therefore, we argue that managers and employers should increase job importance by providing incentives related to job satisfaction and mental health. Often the jobs available for youngsters are “poor” overqualified and in some cases precarious. Thus, it is important that the companies enhance the meaning of work for youngsters offering jobs that are valuable and meaningful. This is the type of “incentives” that may make work more meaningful for youth and less toxic, dissatisfying and unhealthy.

At the beginning of this paper, we noted that the relationship between job satisfaction and mental health is mainly considered harmonious, and that there is scarce research about the anomalous/misaligned patterns between these two variables. The main aim of this study was to extend the relationship between job satisfaction and mental health by identifying four patterns: satisfied-healthy, satisfied-unhealthy, unsatisfied-healthy, and unsatisfied-unhealthy. This taxonomy seems to provide a valid, interesting, and useful way to study employees’ wellbeing by considering their job satisfaction and mental health. It is our hope that addressing this more extended pattern of relationships between the two variables will lead to a possible resolution of the satisfied-healthy conundrum. Thus, the unsatisfied-healthy or satisfied-unhealthy profiles should be the targets of future research. Moreover, this research has contributed to identifying some organizational and personal antecedents that influence and differentiate the four patterns. Future research will need to study how stable or dynamic these patterns are over time, and what their consequences are in the long run. This knowledge will help us to create more effective interventions so that organizations can assist millennials in moving toward a more positive and optimal job satisfaction level and assess its contribution to health and vice-versa.

The present study has been prepared with the support of the project PSI2015-64862-R (MINECO/FEDER). It was also supported by the PROGRAM PROMETEO/2016/138 of the GV. The third author has received a pre-doctoral scholarship, CVU 326153, from the National Council on Science and Technology of Mexico (CONACYT).

The authors also thank the IVIE for the authorization to use the database from the Spanish Observatory of Youth Labor Market Entry and Employment. 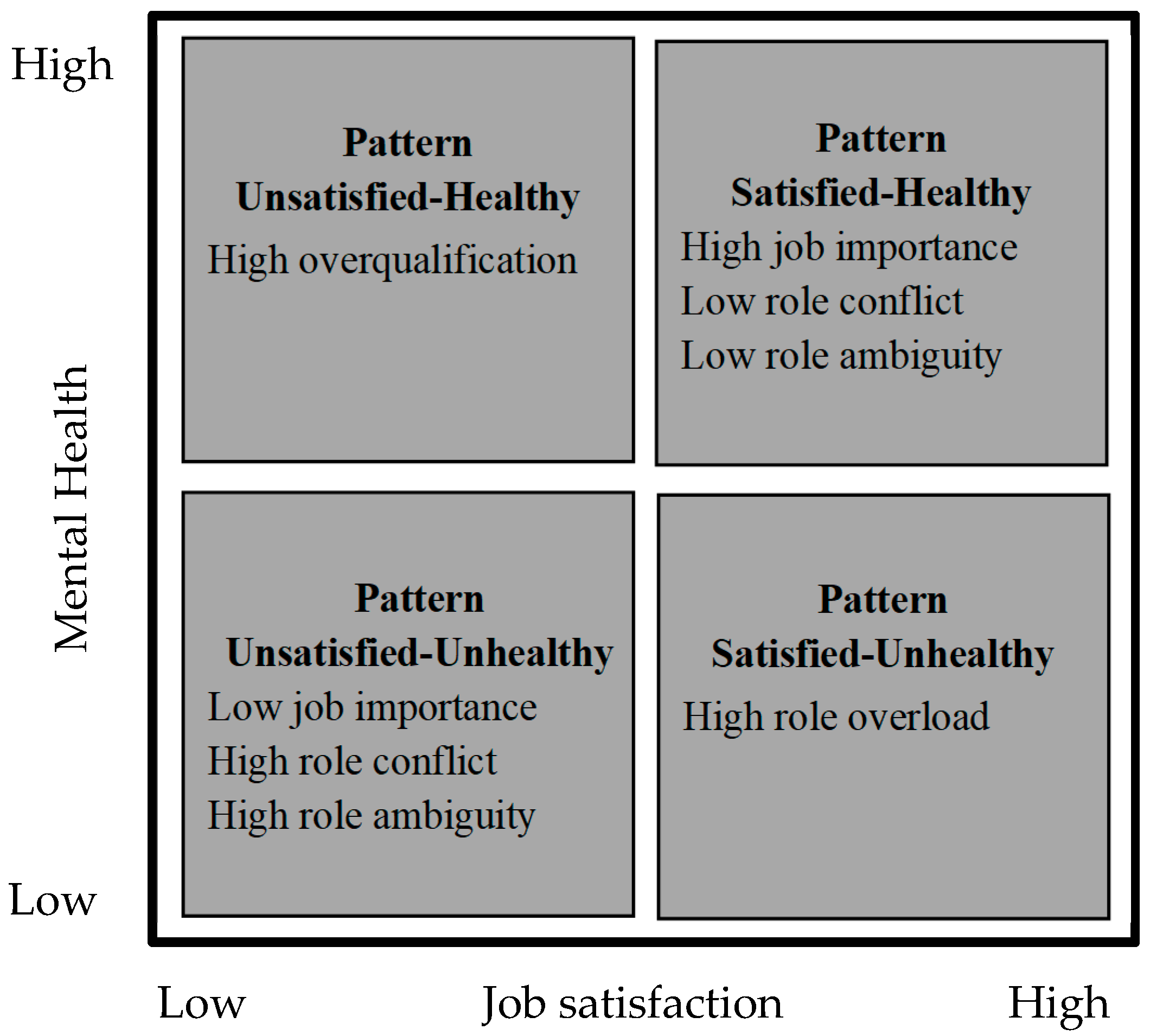