A Cross Sectional Examination of the Relation Between Depression and Frequency of Leisure Time Physical Exercise among the Elderly in Jinan, China
Next Article in Special Issue

Ambient air pollution is a major global health problem and commercial drivers are particularly exposed to it. As no systematic assessment of the health risks associated with occupational exposure to ambient air pollution in this population had yet been carried out, we conducted a systematic review using a protocol-driven strategy. Papers published from inception to April 20, 2018 in MEDLINE, EMBASE, CINAHL, African journals online, the Cochrane library, ISRCTN WHO ICTRP, and the Web of Science and Scopus databases were screened for inclusion by two independent reviewers. Original articles with at least an available abstract in English or French were included. The initial search retrieved 1454 published articles of which 20 articles were included. Three studies reported a significant difference in white blood cells (106/L) among commercial motorcyclists compared to rural inhabitants (5.041 ± 1.209 vs. 5.900 ± 1.213, p = 0.001), an increased risk of lung cancer (RR = 1.6, 95%CI 1.5–1.8) in bus drivers and an increased standardized mortality ratio (SMR) in bus drivers from Hodgkin’s lymphoma (SMR 2.17, 95%CI 1.19–3.87) compared to white-collar workers. Other studies also found that drivers had more oxidative DNA damage and chromosome breaks. Four papers failed to demonstrate that the drivers were more exposed to air pollution than the controls. Three other studies also reported no significant difference in lung function parameters and respiratory symptoms. The genetic polymorphisms of detoxifying enzymes were also not homogeneously distributed compared to the controls. There is some evidence that occupational exposure to ambient air pollution among commercial drivers is associated with adverse health outcomes, but the existing literature is limited, with few studies on small sample size, methodological weaknesses, and contradictory findings—thus, further research is recommended. View Full-Text
Keywords: air pollution; health risk; driving; automobile; bus; motorcycle air pollution; health risk; driving; automobile; bus; motorcycle
►▼ Show Figures 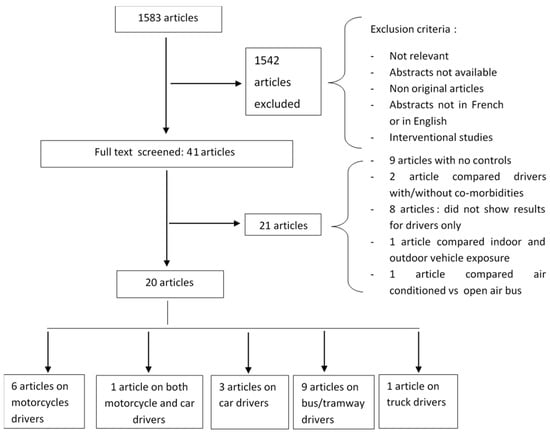