Recommendations for Improving the Quality of Rare Disease Registries

This study aimed to analyse population-based mortality attributed to rare congenital anomalies (CAs) and assess the associated time trends and geographical differences in Spain. Data on CA-related deaths were sourced from annual mortality databases kept by the National Statistics Institute of Spain (1999–2013). Based on the ICD-10, only CAs corresponding to rare diseases definition were included in this study. Annual age-adjusted mortality rates were calculated and time trends were evaluated by joinpoint regression analysis. Geographical differences were assessed using standardised mortality ratios and cluster detection. A total of 13,660 rare-CA-related deaths (53.4% males) were identified in the study period. Annual age-adjusted mortality rates decreased by an average of −5.2% (−5.5% males, −4.8% females, p < 0.001). Geographical analysis showed a higher risk of rare-CA-related mortality in regions largely located in the south of the country. Despite their limitations, mortality statistics are essential and useful tools for enhancing knowledge of rare disease epidemiology and, by extension, for designing and targeting public health actions. Monitoring rare-CA-related mortality in Spain has shown a 15-year decline and geographical differences in the risk of death, all of which might well be taken into account by the health authorities in order to ensure equality and equity, and to adopt appropriate preventive measures.
Keywords: rare diseases; congenital anomalies; population-based mortality; geographical analysis; time trend rare diseases; congenital anomalies; population-based mortality; geographical analysis; time trend

Congenital anomalies (CAs) comprise a large, highly heterogeneous group of birth outcomes, usually classified according to the specific organ or system affected. CAs are an important cause of premature death, chronic illness and lifelong disability worldwide. According to the 2015 Global Burden of Disease study, CAs led to 8.5% (7.7–9.5%) of deaths under the age of 5 years [1]. Liu et al., using vital registration data, also concluded that CAs were the most important cause of death in countries with very low (<10 per 1000 livebirths) and low (10–25 per 1000 livebirths) under-5 mortality rates [2]. It is also clear that CA-related mortality merits attention since, while nearly all leading causes of death registered some form of decrease from 2005 to 2015 [1], CAs, along with neonatal sepsis, were the exception without any significant change. Moreover, Oza et al. observed that the proportion of deaths from congenital disorders was relatively stable across the period (data for 2000–2013 in 194 countries), with the smallest relative decrease in risk being predicted for congenital disorders [3].
As one of the leading causes of infant mortality, monitoring CA-related deaths is a useful practice for epidemiological analysis of population trends, for surveillance, and for research geared to identifying possible risk factors and, by extension, establishing public health actions. Indeed, this is precisely one of the purposes of international initiatives focused on effective birth-defect surveillance, such as the European network of population-based registries for the epidemiologic monitoring of CAs (EUROCAT) or the International Clearinghouse for Birth Defects Surveillance and Research (ICBDSR) [4,5]. These are examples of successful collaborative networks of CA registries and programmes confronting varying degrees of coverage in associated countries [6].
Furthermore, most CAs are low-prevalence conditions and thus individually regarded as rare diseases (prevalence below 5 per 10,000 in the European Union). Indeed, rare CAs account for approximately 80% of subgroups used by EUROCAT for the monitoring of CAs [7]. Although epidemiological studies on rare diseases face different challenges, such as assembling large cohorts of affected individuals, there is continuous encouragement to analyse and enhance the available epidemiological information [8]. In this respect, official nationwide statistics provide uniform population-based data, which are useful as a complement to data from existing surveillance networks and disease-specific or patient registries. More specifically, mortality statistics cover 100% of the population and share some minimum criteria that facilitate temporal and spatial analysis. Accordingly, they furnish uniform, robust series for epidemiological study of low-prevalence diseases [9].
The use of Geographic Information Systems (GIS) and spatial analysis data has become commonplace in health research because of the potential for monitoring and tracking disease trends, cluster detection, and/or evaluating environmental hazards [10,11]. Hence, an increasing number of studies have been combining GIS and epidemiological methods, as applied, for instance, to specific rare congenital diseases [12,13] or to CAs as a whole [14,15,16]. Aside from studies published on the mortality of some CAs or small groups of CAs, however, to date there have been no specific temporal or spatial analyses that have focused on the rare CA group as such, and only some items of related useful information can be extracted from other analyses [17].
Accordingly, this study sought to analyse population-based mortality attributed to rare CAs, globally and by anatomic system according to the International Classification of Diseases, as well as for remarkable rare CAs, and assess the associated time trends and geographical differences in Spain. This information can be added to the studies on the occurrence of rare CAs, thus completing the background. It involved obtaining essential knowledge for better characterisation of nationwide distribution of this group of rare diseases, enhancing their visibility, and detecting local neighbourhood clusters which displayed a high risk of death from rare CAs. All this helps in establishing a baseline that can serve as reference for comparisons with future analyses (what can contribute to estimate the impact of possible modifying factors or measures influencing mortality attributed to rare CAs) or with comparable figures in other countries.

Deaths due to CAs were sourced from annual mortality databases kept by the National Statistics Institute (NSI) of Spain, corresponding to population-based data for the period 1999–2013. Only ICD-10 (International Classification of Diseases, 10th Revision) codes deemed to be rare diseases by reason of their low prevalence were included for study purposes [18]. Therefore, we have considered as rare CAs those with a birth prevalence below 5 per 10,000. Causes of death due to rare CAs were grouped by ICD-10 category for the main types of CAs (Table S1), with a breakdown by date and place of death, sex, and date of birth. Annual populations categorised by sex and age at a municipal level were also obtained from the NSI, in order to calculate age-adjusted mortality rates for males, females and both sexes combined (expressed per 100,000 inhabitants). For the age-adjusted mortality rates, we used the Standard European Population as reference.
Time trends were assessed by joinpoint regression analysis, including two possible joinpoints across the 15 years of study. These regression models were calculated overall and by type of CA. The only exceptions were “cleft lip and cleft palate”, “CAs of eye, ear, face and neck”, and “CAs of genital organs”, and this can be explained because although these three groups of rare CAs are included in the present study, their time trend analyses were not performed due to the extremely low number of deceases (6 in total) attributed to these CAs in the period 1999–2013.
Spatial analysis was performed for NSI population and mortality data, by municipality, sex and age group. Municipalities were aggregated into 326 districts, defined as divisions of Spanish territory pertaining to adjacent municipalities having similar geographical and historical features [19]. This spatial unit was chosen for the purposes of robustness and the stability of results based on a low number of deaths [20]. For the period 1999–2013, standardised mortality ratios (SMRs) were calculated by district, and subsequently smoothed in line with the conditional autoregressive model proposed by Besag et al. [21]. The Spanish mortality rate due to rare CAs across the whole period was taken as reference, so it corresponded to the SMR value of 1.00 (expected mortality). Smoothed SMRs make use of data from adjacent units, assuming a Poisson distribution and taking into account the spatial contiguity and heterogeneity of each unit. This enabled us to estimate the relative risk (RR) of death due to rare CAs by district and the associated posterior probability (PP). PP values show those districts with significantly higher (PP > 0.80) or lower (PP < 0.20) risk of death with respect to the expected for the country as reference. The geographical analysis was completed by cluster detection, with a radius of zero to 50 km being set around each of the main municipal population centres. The clusters are assessed as the circles with the maximum likelihood of containing more or fewer cases of rare-CA-related mortality than expected. Results were evaluated using the Monte Carlo simulation (999 iterations) with a 95% confidence interval (CI) [22]. All statistical analyses were performed using the Stata (StataCorp, College Station, TX, USA), Joinpoint (National Cancer Institute, Bethesda, MD, USA), R-INLA (Norwegian University of Science and Technology, Trondheim, Norway) and SaTScan (Martin Kulldorf, Harvard Medical School and Harvard Pilgrim Health Care Institute, Boston, MA, USA) computer software programmes, with ArcGIS software (Esri, Redlands, CA, USA) being used for cartographical representations.

The study was conducted in accordance with the Declaration of Helsinki, and the protocol was approved by the Ethics Committee of the Instituto de Salud Carlos III (CEI 50/2013).

In conclusion, this is the first nationwide population-based study to focus on mortality due to rare CAs. Our results contribute to the monitoring of rare CAs along 15 years in Spain, by providing evidence of the continuous decline in mortality rates and illustrate some geographical differences in the risk of death. These findings are not only useful for assessing the burden of low-prevalence CAs in Spain, but also serve as evidence which might be taken into account by health authorities, in order to identify possible risk factors, adopt appropriate preventive measures, implement and evaluate health policies and healthcare plans ensuring equality and equity, with the ultimate purpose of achieving better health for all.

The authors would like to thank the members and staff of the Spanish Rare Diseases Registries Research Network (Spain RDR) for their invaluable expertise in matters pertaining to the ICD and identification of rare diseases. 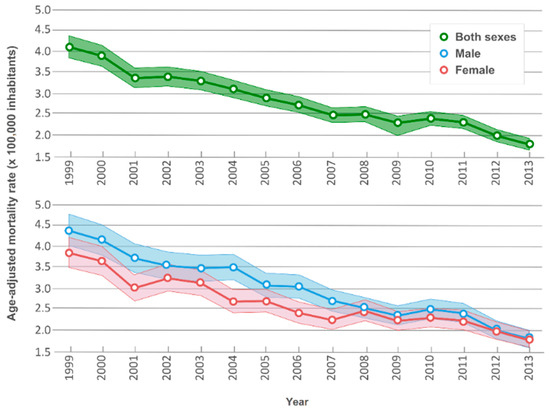 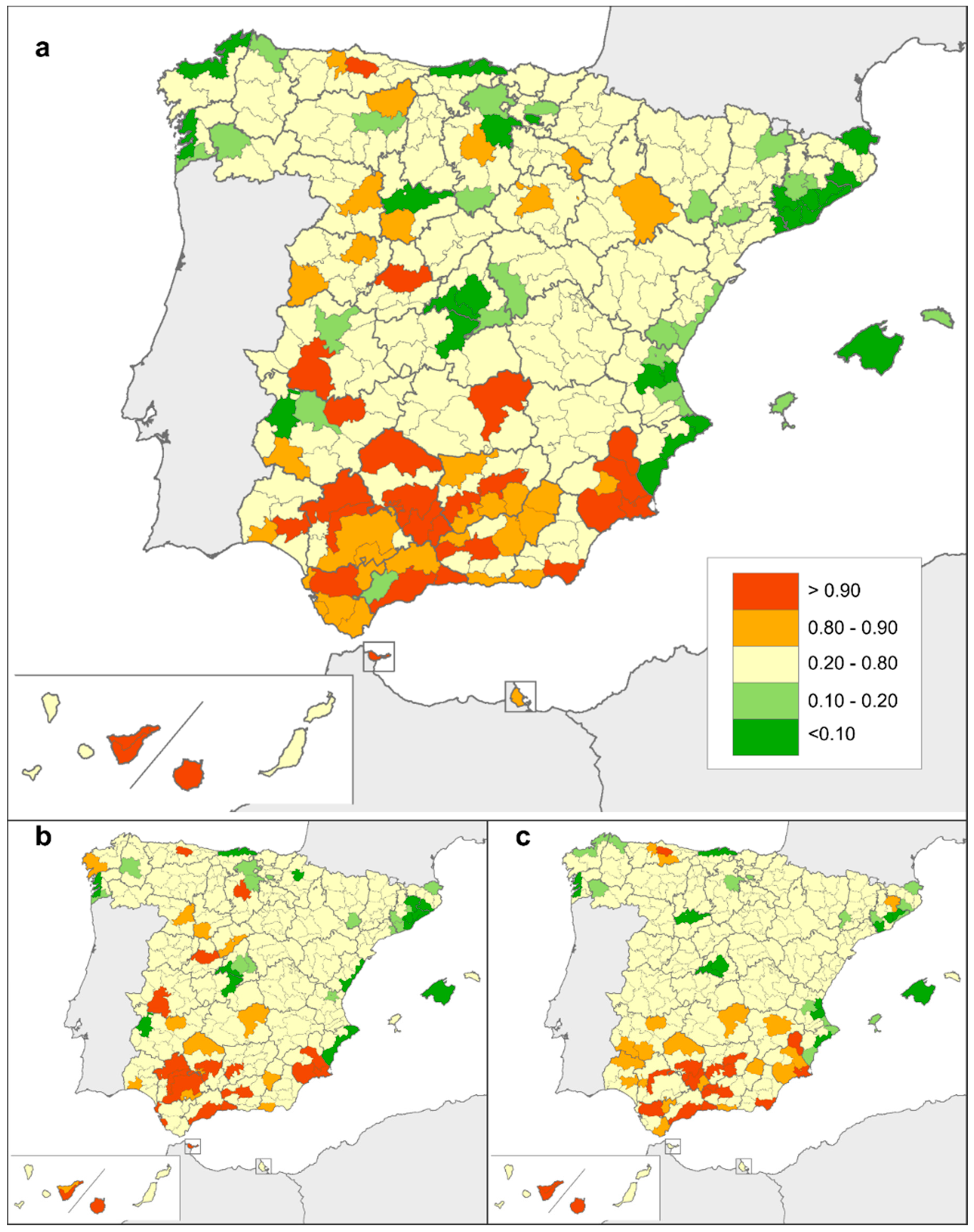