Emission Characteristics of Particulate Matter, Volatile Organic Compounds, and Trace Elements from the Combustion of Coals in Mongolia
Next Article in Special Issue

Exposure to Environmental and Occupational Particulate Air Pollution as a Potential Contributor to Neurodegeneration and Diabetes: A Systematic Review of Epidemiological Research
Previous Article in Special Issue

Prevalence of All-Cause Mortality and Suicide among Bariatric Surgery Cohorts: A Meta-Analysis

During the process of normal aging, there are neurobiological changes such as the loss of neurons [1], and psychosocial changes that negatively affect cognition and social connectedness [2]. Correspondingly, horticultural therapy (HT) is becoming an increasingly popular non-pharmacological method to improve the well-being of older adults [3]. HT is relatively easy to implement, and this has made it a popular preventive measure in enhancing the health of older adults. From a medical perspective, the positive effects of garden settings on patients with mental disorders [4] and hospitalized war veterans have been shown [5]. The therapeutic effects of HT include social engagement [2,3] and preventing cognitive decline [3] and depression [6]. HT was found to improve the physical and mental well-being of patients with chronic musculoskeletal pain [7], as well as patients in a cardiac rehabilitation ward [8].
A recent study by Li et al. (2010) reported increases in the activity of natural killer (NK) cells and its enzymes after a forest bathing trip [9]. The authors speculated that decreased stress hormones may mediate this phenomenon. Horticultural gardens in a hospital setting have been reported to increase well-being and social connectedness among patients with brain damage as well [10]. One of the core objectives of HT is to promote social support and sharing amongst the participants. Noone et al. (2015) demonstrated that communal gardening with its collaborative features, may instil a sense of belonging to the community, hence improving social integration [11].
Although there have been numerous studies on HT, a systematic review of randomized controlled trials (RCTs) on HT concluded that the studies conducted so far were relatively low quality [12]. In particular, descriptions of the study designs and statistical analyses had mostly been omitted. Also, most of the RCTs employing HT have focused mainly on severe mental disorders, such as patients with dementia, depression, and schizophrenia. Although all studies done so far have showed significant improvements in their respective primary outcome measures, a few major limitations were noted. Amongst the limitations was the small sample size of most HT studies, the short intervention duration and the lack of a control group [12]. These issues limit the generalizability and applicability of the findings and call into question the validity of the results.
It has been postulated that increased levels of IL-6 and IL-1β are involved in the pathogenesis of Alzheimer’s disease and major depressive disorders [13]. On the other hand, the presence of soluble glycoprotein 130 (sgp130), which inhibits IL-6 trans-signalling [14], may modify the association between elevated interleukin 6 soluble receptor (sIL6R) levels and myocardial infarction [15]. The chemokine CXCL12 (SDF-1α) controls the functions of bone marrow-derived stem cell functions and neurogenesis and there are decreased level of CXCL12 in early Alzheimer’s disease [16]. Lower levels of CXCL-5 (RANTES) have been observed in patients suffering from dementia, when compared to healthy individuals. Higher levels of BDNF (brain-derived neurotrophic factor), which has been shown to improve synaptic plasticity and long-term memory, may decrease the risk of dementia [17]. Dementia and depression in older adults are also associated with changes in hormone levels, such as cortisol and dehydroepiandrosterone (DHEA) levels [18]. Despite the important roles of these biomarkers, the specific effects of HT on the above-mentioned biological markers remain largely unknown.
In view of this, Lin et al. suggested that measures of biomarkers should be incorporated in future studies [4]. This proposition was supported by the findings of Mao et al. which showed that forest bathing reduced cardiovascular disease-related biomarkers, one of which was IL-6 [19]. Additionally, Ochiai et al. showed that forest bathing reduced blood pressure (BP), urinary adrenaline, and both serum and salivary cortisol [20,21]. In this HT-randomized controlled trial, we aimed to measure the changes in the levels of pro-inflammatory cytokines, interleukin (IL)-6, IL-1β, soluble glycoprotein 130 (sgp130), chemokines, C-X-C motif chemokine 12 (CXCL12), also known as stromal cell-derived factor 1 alpha (SDF-1α), C-C motif ligand 5 (CCL-5), also known as regulated on activation, normal T-cell expressed and secreted (RANTES) and BDNF, all of which exert pleiotropic effects on the central nervous system and are key modulators of the immune and nervous system. Based on the findings of past studies, we also hypothesized that increased social connection would be observed in the HT group after intervention.

This trial began with the Ethics Board’s approval with NUS-IRB (approval number: B-15-016). It was also registered with Clinicaltrials. gov, identifier: NCT02495194 (https://clinicaltrials.gov/ct2/show/NCT02495194). The participants were 59 older adults between the ages of 61 and 77 (mean = 67.1 years, SD = 4.31) recruited from a neighbourhood in the western region of Singapore. All the participants were screened based on the inclusion and exclusion criteria. That is, the participants should be aged between 60 to 85 years old, able to provide informed consent and have a minimum Montreal Cognitive Assessment (MoCA) score of 22. They must not have current or past histories of severe medical or psychiatric disorders. They must not be undergoing any concurrent therapy, and should have no significant visual or hearing impairments or upper and lower limb motor difficulties. Subsequently, qualified participants were randomized into either the HT intervention group or waitlist control group.

The HT intervention was designed by an experienced instructor. The outdoor sessions were conducted at a few selected parks/gardens and a nature reserve in Singapore. The intervention comprised a total of 15 sessions, with activities ranging from indoor gardening, growing, maintaining and harvesting vegetables and herbs to guided walks in the various parks (Table 1). The duration of each session was approximately one hour. They were conducted weekly for three months, and then monthly for the subsequent three months. To be ethical and fair to the participants in both groups and to enable all the participants to experience HT, a waitlist control design was employed in place of an active control design. The waitlist control group began HT only after the HT intervention group had completed all the interventions.

To measure the biomarkers, ten millilitres of fasting venous blood were withdrawn from each participant between 8.30 a.m. and 9.30 a.m. at the research centre. The blood was sent to the laboratory within three hours after the first venepuncture. Subsequently, the whole blood samples were centrifuged at 1650 g for 25 min at room temperature to obtain the plasma. All the blood and plasma samples from both groups at the three time-points were stored at −80 °C. The nine plasma biomarkers were examined using commercially available enzyme-linked immunosorbent assay (ELISA) kits, namely, IL-6, IL-1β (ThermoFisher, Waltham, MA, USA), CXCL12/SDF-1α, CXCL5/RANTES (R&D Systems Inc., Minneapolis, MN, USA), BDNF (Promega Corporation, Madison, WI, USA), DHEA (CUSABIO, Houston, TX, USA), cortisol, hs-CRP (Tecan, Männedorf, Switzerland), and sgp130 (RayBiotech Inc., Norcross, GA, USA). Assays for each biomarker were run on the same day to avoid batch effect.

The Montreal Cognitive Assessment (MoCA) was used to assess the cognitive function of the participants. We used the Zung Self-Rating Depression Scale (SDS), and the Zung Self-Rating Anxiety Scale (SAS) to assess psychopathology and the Ryff’s Scales of Psychological Well-Being, Friendship Scale and Satisfaction with Life Scale to assess the psychosocial well-being of the participants. Detailed descriptions of the measures can be found in our protocol paper [22].

All data were collected and analysed from 2015 to 2017. The biological and psychosocial measurements were expressed as mean ± standard deviation (SD). Baseline variables were compared using Student’s t-test, chi-square or Fisher’s exact tests. A general linear model using repeated-measured analysis of variance (rANOVA) was employed to examine the difference between the active treatment and waitlist control groups. The three time-points were entered as a within-participants factor (indicated as “time”) while the two groups of participants were entered as a between-participants factor (indicated as “group”). When the rANOVA indicated significant interaction between group and time (between-group difference), or a significant main effect of time (within-group difference), post-hoc analyses of paired T-tests were conducted to determine the pair of data that differed significantly. A two-tailed p-value of <0.05 was considered as statistically significant. Alpha values of the paired T-tests were adjusted for using Bonferroni’s correction. Analyses and construction of the graphs and figures were performed using the Statistical Package for the Social Sciences (SPSS) version 23.0 (IBM, Armonk, NY, USA) and GraphPad Prism version 6 (GraphPad Software, San Diego, CA, USA), respectively. Mean imputation of data was performed to replace loss-to-follow-up missing values, hence enabling intention-to-treat analyses. Log- or squared-transformations were employed for highly skewed data.

Table 2 shows the baseline characteristics of the HT and waitlist control groups. There were no significant differences in terms of demographics and psychosocial assessments between the two groups (p > 0.05). Figure 1 shows the flow of the participants throughout the intervention period.

Based on the rANOVA results, there were no significant effects of time, effects of group or time × group interactions on the levels of these four biomarkers: IL-1β, cortisol, DHEA and hs-CRP. Hence, no post hoc analyses were performed. There was a significant effect of time on Sgp-130 levels (p = 0.01) (Table 3). Post hoc analyses were performed and no significant changes in either the HT or waitlist control groups were found (Figure 2i).

3.3.1. Positive Relations with Others

There was a significant time × group interaction on the sub-scale of the Ryff’s Scales of Psychological Well-Being, positive relations with others (p < 0.001) (Table 4). Post hoc paired T-test analyses were conducted to examine the changes. In HT participants, the mean score of positive relations with others, a sub-scale of the Ryff’s Scales of Psychological Well-Being, was significantly improved 6 months after study entry. Relative to baseline, the mean scores of positive relations with others was significantly increased by 2.14 points (95% CI: 0.52 to 3.76) in HT participants (p = 0.001). On the other hand, the change in the control group after 6 months was not significant (p = 0.31), with the mean scores reduced by −0.7 points (95% CI: −2.09 to 0.69).

The results of this RCT suggest that HT could potentially be useful for reducing inflammation and protecting neuronal functions in healthy elderly adults by reducing plasma IL-6 levels and maintaining plasma CXCL12 (SDF-1α), CXCL5 (RANTES) and BDNF levels. We have provided preliminary biological evidence for the benefits of HT, as well as some hypothesized mechanisms underlying HT that may improve physical and mental health. The significant reductions in plasma IL-6 levels after 6-months in the HT group points to the possibility that elderly adults with inflammatory diseases associated with high IL-6 levels such as depression, dementia, rheumatoid arthritis and cancer could garner benefits from HT. Furthermore, our data contributes to the knowledge gap on how HT might exert hematopoietic brain support and prevent neurodegeneration by maintaining plasma CXCL12 (SDF-1α), CXCL5 (RANTES) and BDNF levels. Further biological studies on the effects of HT are necessary to replicate these findings in larger elderly populations, particularly those with inflammatory disorders and/or high risk of dementia.

We gratefully acknowledge the staff and volunteers from the National Parks Board, Gardens by the Bay, Government of Singapore, Training and Research Academy at Jurong Point ([email protected]) and Presbyterian Community Services (PCS). We also gratefully acknowledge Esther Mok, Bernett Lee and the lab members from A*STAR’s Singapore Immunology Network (SIgN) for their assistance with biomarkers analyses.

The authors declare no conflict of interest. The funders had no role in the collection, analyses, or interpretation of data; in the writing of the manuscript, and in the decision to publish the results. 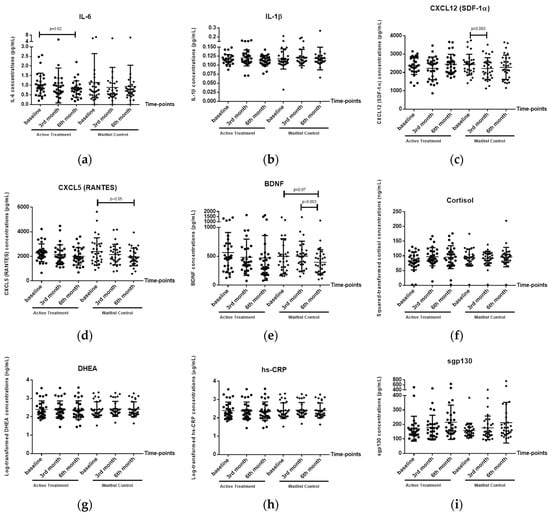