Is There a Relationship between Lead Exposure and Aggressive Behavior in Shooters?
Next Article in Special Issue

Is It Possible to “Find Space for Mental Health” in Young People? Effectiveness of a School-Based Mental Health Literacy Promotion Program
Previous Article in Special Issue

Aspects of Additional Psychiatric Disorders in Severe Depression/Melancholia: A Comparison between Suicides and Controls and General Pattern

Epidemiology of Suicide and the Psychiatric Perspective

Suicide is a worldwide phenomenon. This review is based on a literature search of the World Health Organization (WHO) databases and PubMed. According to the WHO, in 2015, about 800,000 suicides were documented worldwide, and globally 78% of all completed suicides occur in low- and middle-income countries. Overall, suicides account for 1.4% of premature deaths worldwide. Differences arise between regions and countries with respect to the age, gender, and socioeconomic status of the individual and the respective country, method of suicide, and access to health care. During the second and third decades of life, suicide is the second leading cause of death. Completed suicides are three times more common in males than females; for suicide attempts, an inverse ratio can be found. Suicide attempts are up to 30 times more common compared to suicides; they are however important predictors of repeated attempts as well as completed suicides. Overall, suicide rates vary among the sexes and across lifetimes, whereas methods differ according to countries. The most commonly used methods are hanging, self-poisoning with pesticides, and use of firearms. The majority of suicides worldwide are related to psychiatric diseases. Among those, depression, substance use, and psychosis constitute the most relevant risk factors, but also anxiety, personality-, eating- and trauma-related disorders as well as organic mental disorders significantly add to unnatural causes of death compared to the general population. Overall, the matter at hand is relatively complex and a significant amount of underreporting is likely to be present. Nevertheless, suicides can, at least partially, be prevented by restricting access to means of suicide, by training primary care physicians and health workers to identify people at risk as well as to assess and manage respective crises, provide adequate follow-up care and address the way this is reported by the media. Suicidality represents a major societal and health care problem; it thus should be given a high priority in many realms. View Full-Text
Keywords: suicidality; suicide; worldwide; epidemiology; age; gender; mental disease; psychiatric illness suicidality; suicide; worldwide; epidemiology; age; gender; mental disease; psychiatric illness
►▼ Show Figures 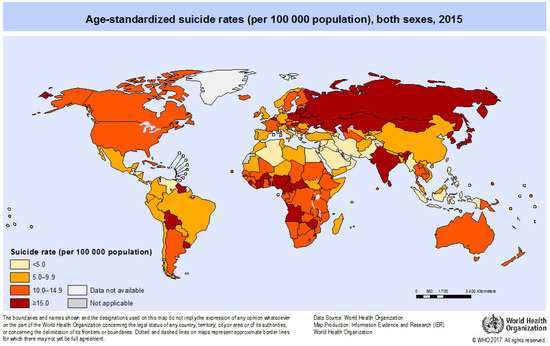