Ventilation and Air Quality in Student Dormitories in China: A Case Study during Summer in Nanjing
Previous Article in Journal

:
We estimated the daily intakes of chlorpyrifos and cypermethrin via ingestion of indoor dust and outdoor soils using the Stochastic Human Exposure and Dose Simulation Model on a probabilistic approach for Taiwanese young children. Variables for the estimation, such as concentration, ingestion rate, and body weight, were adopted from previous studies. Monte Carlo simulation was performed with 1,000,000 iterations to simulate a single daily intake, which was shown in terms of percentage of the Acceptable Daily Intake (ADI) of either insecticide. The daily intakes are minimal with a 99% probability, but go up steeply at the 99.9th percentile (13.1% and 20.0% of the ADIs of chlorpyrifos and cypermethrin, respectively). The sensitivity analysis indicates that concentration is the most determinant variable for daily intake estimation, suggesting that high intakes may occur when insecticide concentrations are elevated. Compared to the data of daily intakes via dietary ingestion of vegetables derived from a previous study, the estimated non-dietary intakes are negligible until reaching the highest percentile. Consequently, the non-dietary ingestion exposure to either insecticide is commonly low for young children in Taiwan’s homes, unless high contamination (e.g., indoor insecticide application) occurs in the environment. Care has to be taken to avoid high contamination indoors.
Keywords:
chlorpyrifos; cypermethrin; daily intake; home environment; Monte Carlo simulation; non-dietary ingestion; SHEDS model; Taiwan

2.1. Analysis of Insecticides in Dust or Soils

Sampling of house dust and yard soils was conducted in participating homes with consent. The study was conducted in compliance with the Declaration of Helsinki, and the protocol and procedures were reviewed and approved by the Ethical Committee of Tzu Chi General Hospital/University (No: IRB103-170-B, approved on 5 January 2016). A composite sample of indoor dust and an outdoor soil sample were collected from each house using a vacuum sampler and a set of dustpan/brush set, respectively. Approximately 0.5 g of dust or soil from each sample was treated with ethyl acetate for ultrasonic extraction and centrifugation, and the extract was analyzed on gas chromatography-mass spectrometry for chlorpyrifos and cypermethrin with use of selective ion monitoring for sensitivity enhancement. The limits of detection (LOD) were found to be 0.025 and 0.031 µg/g for chlorpyrifos and cypermethrin, respectively. Replicate analysis was conducted for randomly selected dust and soil samples for variability check, which showed good reproducibility. There were 52 indoor and 57 outdoor samples with valid data of chlorpyrifos and cypermethrin for the study. Details of sampling and analytic procedures were described previously [2].

The formula for daily intake via ingestion of dust or soils is as follows: where
IR: Ingestion rate of dust or soils (mg/day)
C: Concentration of insecticide in dust or soils (chlorpyrifos or cypermethrin) (µg/g)
CF: Conversion factor (10−3 g/mg)
BW: Body weight of children (kg)
Distributions of the above variables are listed in Table 1. Ingestion rates of dust or soils adopted herein were modeled specifically for 3–6 year old children using SHEDS, because of high frequency of mouthing behaviors and availability of adequate exposure data for this age group [21]. Concentrations of insecticides (chlorpyrifos, cypermethrin) for indoor dust and outdoor soils, provided by our previous work [2], could be used for calculation with ingestion rates of dust and soils, respectively. For those dust samples under LOD, halves of the LOD values were used in place for dose estimation. Children’s body weight data were adopted from the new growth charts suggested and developed for Taiwanese children and adolescents [22]. The dust and soil ingestion fits a lognormal distribution, as stated by Özkaynak et al. [21]; the concentrations of insecticides from our previous study were determined to be distributed lognormally by statistical tests. Each of the body weight distributions for different ages on the growth charts appears to be skewed to the right, suggesting a lognormal distribution.
We applied Monte Carlo simulation as probabilistic modeling using Oracle® Crystal Ball (Fusion Edition, Release 11.1.2.3.000, Oracle® Corp., Redwood Shores, CA, USA), an add-on software to Microsoft® Excel 2010 (Microdoft® Corp., Redmond, WA, USA). The software allows users to set up a distribution of data, instead of a value of mean or median, as input of a variable. At each trial, data are randomly selected following the given distributions of variables to compute an outcome value; such a trial can be repeated up to a hundred million times to derive cumulative outcome values, which form a distribution as well with full simulated statistical information (e.g., mean, median, standard deviation) (Figure 1). For estimation of the daily intakes in this study, the variables of IR, C and BW were set as lognormal distributions with parameters listed in Table 1, and doses of chlorpyrifos and cypermethrin via indoor dust and outdoor soil ingestion were separately derived. Each simulation for dose estimation was performed with 1,000,000 iterations, and 30 replicates were completed to get better estimates.
For risk assessment of children’s exposure to both insecticides, we followed a previous study that expressed the estimated daily intakes as percentages of the Acceptable Daily Dose (ADI) values for chlorpyrifos and cypermethrin [23], which were 0.01 and 0.02 mg/kg/day, in accordance with World Health Organization (WHO) [24].

The simulation results of daily intakes of chlorpyrifos and cypermethrin via ingestion of indoor dust and outdoor soils for 3–6 year old children are presented in Table 2. As all variables in the model were set to be lognormal distributions, the simulation data were obviously accumulated to form a lognormal distribution, which was confirmed by the fit-probability-distribution feature of the software (Figure 1d). At the 90th percentile of the daily intake, neither insecticide resulted in more than 0.1% of the respective ADI, indicating that the daily intake of chlorpyrifos or cypermethrin for young children in the residential environment was negligible with a probability more than 90%. The percentage of ADI increased as the percentile went up; at the P99, the total daily intake of chlorpyrifos was raised to 1.30% of ADI (exposure to indoor dust and outdoor soils), whereas that of cypermethrin was approximately 2.35% of ADI. In the extreme case of P99.9, the total intakes leaped to 13.1% and 20.0% for chlorpyrifos and cypermethrin, respectively.
Monte Carlo simulation also included sensitivity analysis of modeling, determining which variables have the greatest impact on the model. For the modeling of indoor dust ingestion, the variable of C (concentration of either insecticide) was the one with the greatest impact, bearing a value of contribution to variance around 82%, whereas IR (ingestion rate) only resulted in approximately 18% and BW (body weight) has nearly zero impact (data not shown in table). Ingestion of outdoor soils demonstrated a similar pattern with 91.4% and 8.5% for C and IR, respectively, and no effect for BW. The sensitivity analysis indicated that concentration of insecticide (C) was the principal factor that determines the daily intake. 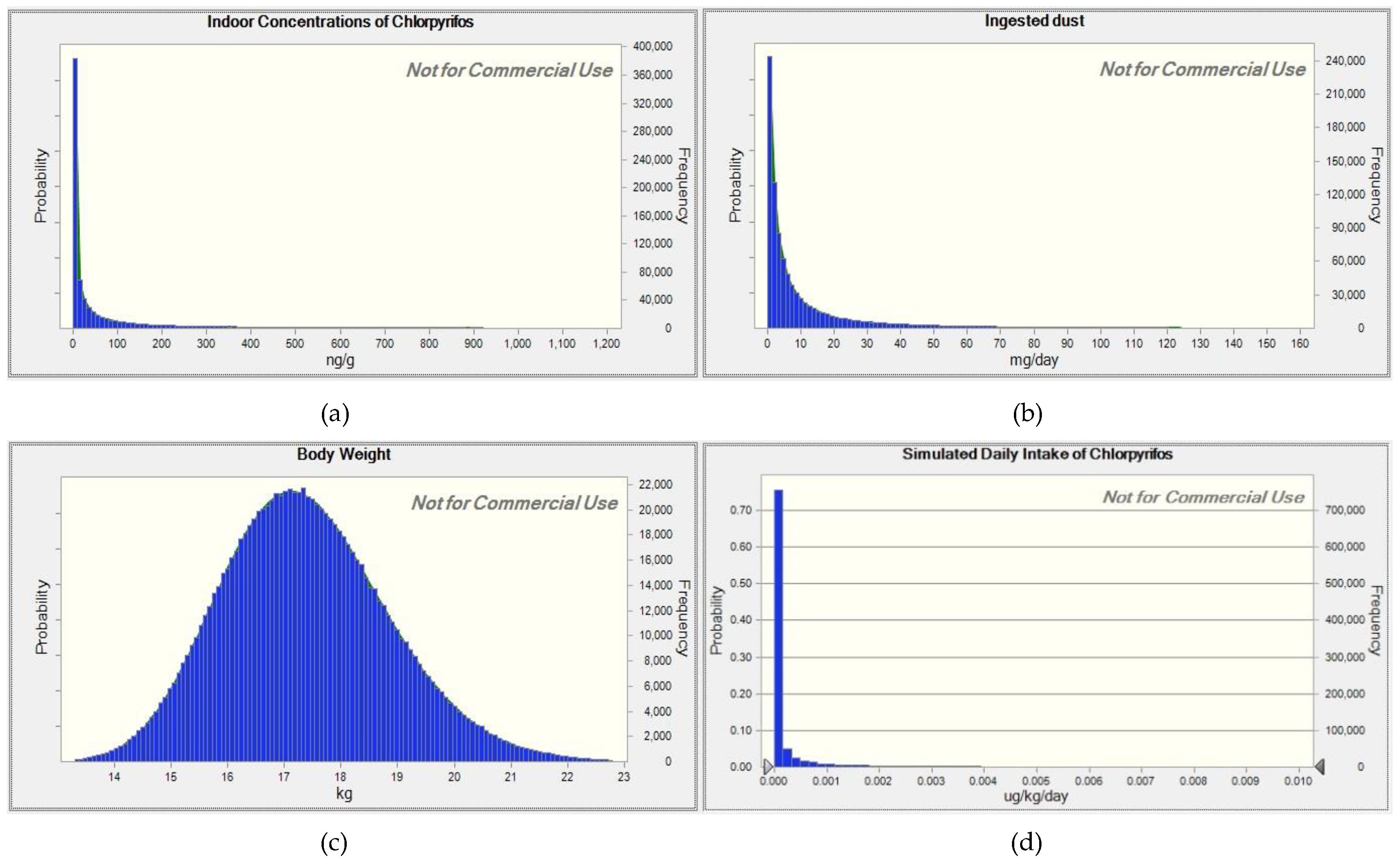