Tracking physical activity and sleep patterns using wearable trackers has become a current trend. However, little information exists about the comparability of wearable trackers measuring sleep. This study examined the comparability of wearable trackers for estimating sleep measurement with a sleep diary (SD) for three full nights. A convenience sample of 78 adults were recruited in this research with a mean age of 27.6 ± 11.0 years. Comparisons between wearable trackers and sleep outcomes were analyzed using the mean absolute percentage errors, Pearson correlations, Bland–Altman Plots, and equivalent testing. Trackers that showed the greatest equivalence with the SD for total sleep time were the Jawbone UP3 and Fitbit Charge Heart Rate (effect size = 0.09 and 0.23, respectively). The greatest equivalence with the SD for time in bed was seen with the SenseWear Armband, Garmin Vivosmart, and Jawbone UP3 (effect size = 0.09, 0.16, and 0.07, respectively). Some of the wearable trackers resulted in closer approximations to self-reported sleep outcomes than a previously sleep research-grade device, these trackers offer a lower-cost alternative to tracking sleep in healthy populations. View Full-Text
Keywords: wearable trackers; sleep monitors; sleep tracker wearable trackers; sleep monitors; sleep tracker
►▼ Show Figures 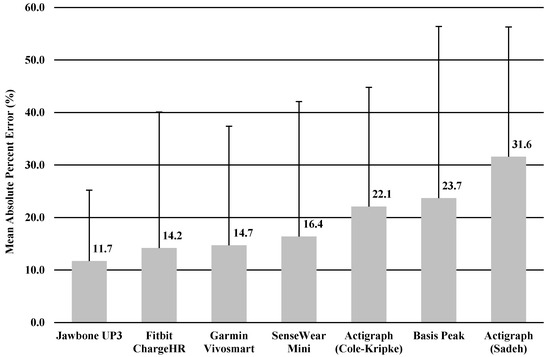