Reducing Food Poverty and Vulnerability among the Rural Elderly with Chronic Diseases: The Role of the New Rural Pension Scheme in China
Next Article in Special Issue

Solid Waste Management Solutions for a Rapidly Urbanizing Area in Thailand: Recommendations Based on Stakeholder Input
Previous Article in Journal

Mercury is a neurotoxin, with certain organic forms of the element being particularly harmful to humans. The Minamata Convention was adopted to reduce the intentional use and emission of mercury. Because mercury is an element, it cannot be decomposed. Mercury-containing products and mercury used for various processes will eventually enter the waste stream, and landfill sites will become a mercury sink. While landfill sites can be a source of mercury pollution, the behavior of mercury in solid waste within a landfill site is still not fully understood. The purpose of this study was to determine the depth profile of mercury, the levels of methyl mercury (MeHg), and the factors controlling methylation in an old landfill site that received waste for over 30 years. Three sampling cores were selected, and boring sampling was conducted to a maximum depth of 18 m, which reached the bottom layer of the landfill. Total mercury (THg) and MeHg were measured in the samples to determine the characteristics of mercury at different depths. Bacterial species were identified by 16S rRNA amplification and sequencing, because the methylation process is promoted by a series of genes. It was found that the THg concentration was 19–975 ng/g, with a geometric mean of 298 ng/g, which was slightly less than the 400 ng/g concentration recorded 30 years previously. In some samples, MeHg accounted for up to 15–20% of THg, which is far greater than the general level in soils and sediments, although the source of MeHg was unclear. The genetic data indicated that hgcA was present mostly in the upper and lower layers of the three cores, merA was almost as much as hgcA, while the level of merB was hundreds of times less than those of the other two genes. A significant correlation was found between THg and MeHg, as well as between MeHg and MeHg/THg. In addition, a negative correlation was found between THg and merA. The coexistence of the three genes indicated that both methylation and demethylation processes could occur, but the lack of merB was a barrier for demethylation. View Full-Text
Keywords: mercury; landfill; core sampling; hgcA; merA; merB mercury; landfill; core sampling; hgcA; merA; merB
►▼ Show Figures 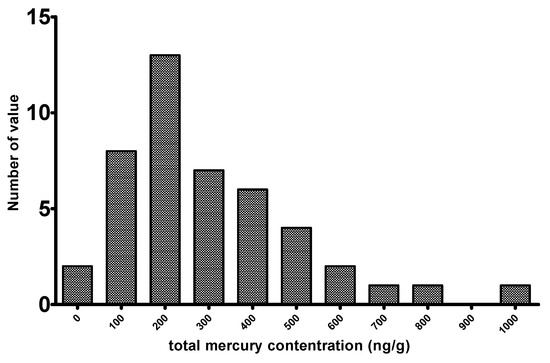