Introduction: Asbestos has been used for thousands of years but only at a large industrial scale for about 100–150 years. The first identified disease was asbestosis, a type of incurable pneumoconiosis caused by asbestos dust and fibres. The latest estimate of global number of asbestosis deaths from the Global Burden of Disease estimate 2016 is 3495. Asbestos-caused cancer was identified in the late 1930’s but despite today’s overwhelming evidence of the strong carcinogenicity of all asbestos types, including chrysotile, it is still widely used globally. Various estimates have been made over time including those of World Health Organization and International Labour Organization: 107,000–112,000 deaths. Present estimates are much higher. Objective: This article summarizes the special edition of this Journal related to asbestos and key aspects of the past and present of the asbestos problem globally. The objective is to collect and provide the latest evidence of the magnitude of asbestos-related diseases and to provide the present best data for revitalizing the International Labor Organization/World Health Organization Joint Program on Asbestos-related Diseases. Methods: Documentation on asbestos-related diseases, their recognition, reporting, compensation and prevention efforts were examined, in particular from the regulatory and prevention point of view. Estimated global numbers of incidence and mortality of asbestos-related diseases were examined. Results: Asbestos causes an estimated 255,000 deaths (243,223–260,029) annually according to latest knowledge, of which work-related exposures are responsible for 233,000 deaths (222,322–242,802). In the European Union, United States of America and in other high income economies (World Health Organization regional classification) the direct costs for sickness, early retirement and death, including production losses, have been estimated to be very high; in the Western European countries and European Union, and equivalent of 0.70% of the Gross Domestic Product or 114 × 109 United States Dollars. Intangible costs could be much higher. When applying the Value of Statistical Life of 4 million EUR per cancer death used by the European Commission, we arrived at 410 × 109 United States Dollars loss related to occupational cancer and 340 × 109 related to asbestos exposure at work, while the human suffering and loss of life is impossible to quantify. The numbers and costs are increasing practically in every country and region in the world. Asbestos has been banned in 55 countries but is used widely today; some 2,030,000 tons consumed annually according to the latest available consumption data. Every 20 tons of asbestos produced and consumed kills a person somewhere in the world. Buying 1 kg of asbestos powder, e.g., in Asia, costs 0.38 United States Dollars, and 20 tons would cost in such retail market 7600 United States Dollars. Conclusions: Present efforts to eliminate this man-made problem, in fact an epidemiological disaster, and preventing exposures leading to it are insufficient in most countries in the world. Applying programs and policies, such as those for the elimination of all kind of asbestos use—that is banning of new asbestos use and tight control and management of existing structures containing asbestos—need revision and resources. The International Labor Organization/World Health Organization Joint Program for the Elimination of Asbestos-Related Diseases needs to be revitalized. Exposure limits do not protect properly against cancer but for asbestos removal and equivalent exposure elimination work, we propose a limit value of 1000 fibres/m3. View Full-Text
Keywords: asbestos; ban; global estimates; costs asbestos; ban; global estimates; costs
►▼ Show Figures 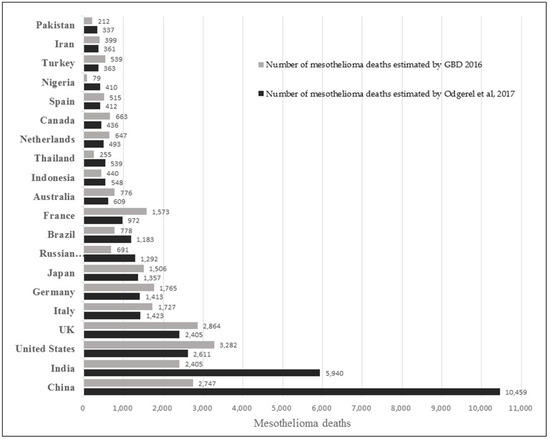