A Comparison of Military and Law Enforcement Body Armour

Body armour is known to be effective in reducing fatalities in military environments [1]. However, body armour is no longer used solely by military populations, and the use of body armour is becoming more widespread among law-enforcement officers (LEOs) [2]. For example, one police force in New Zealand is citing the escalation of violent crimes as evidence of the need to regularly equip LEOs with body armour, particularly for protection against stab threats [2]. Given that a recent review of LEO injuries indicated that dealing with non-compliant offenders and assaults on officers was the leading mechanism of injury [3], this increased use of body armour appears warranted.
Unlike the military environment, which can see personnel rotate through deployment cycles and carry very heavy loads for intermittent periods (e.g., on patrol), the law-enforcement environment involves daily duties that span the officer’s occupational career and yet are ever-changing from minute to minute, day to day, and shift to shift [4]. Every year, police officers are exposed to risk as street-level bureaucrats handling law-enforcement, violent situations, negative attitudes, and threats from citizens [5]. Law-enforcement officers tasks can range from driving a patrol vehicle to checking an individual’s bona fides and attending domestic violence incidents [6]. On this basis, body amour may increasingly be a more constant, daily requirement for many contemporary LEOs, with limited periods of relief.
Noting that the work environment of LEOs is notably different from that of military personnel, it stands to reason that body armour requirements would be different, and a simple repurposing of any given military-purpose body armour may not be appropriate in a law-enforcement environment. As these police departments increasingly require officers to wear body armour, and procure body armour for them, it is important to consider factors such as relative performance and comfort in addition to the protections they afford. Uncomfortable or performance impairing body armour which officers perceive to provide inferior levels of protection will not be well tolerated and may be removed, thus losing its protective value. On this basis, the aims of this research project were to determine whether: (a) the physical movement capabilities of police officers differed when they were wearing current issue military body armour (MBA) as opposed to a specifically designed law enforcement body armour (LEBA); and (b) whether officers perceived there to be any differences in their ability to perform tasks or in their general comfort when wearing the two different types of body armour.

Data pertaining to postural sway were extracted from the AMTI Bio Analysis software into a Microsoft Excel spreadsheet. In addition to the entire 30-s period pertaining to sway path length, velocity of sway, peak anterior–posterior (AP), and medial–lateral (ML) movements, the data for the first five seconds of sway and the last five seconds of sway were also transferred to another Microsoft Excel spreadsheet. After this data extraction was complete, centre of pressure (COP) coordinates recorded as x-axis and y-axis COP positions were used to find movement in both the x and y planes by subtracting each subsequent data point from the previous data point. This revealed any movement of the COP in the plane of interest, which was then input to the Pythagorean theorem (a2 + b2 = c2) to determine the sway path length of the respective individual data point. The total sway path length for the data period of interest (0–5 s or 25–30 s) was then calculated as the sum of the sway path lengths of all data points and divided by five (reflecting the 5 s period of interest, noting velocity = distance/time) to determine the sway velocity for the respective time period.
All data were entered into a data spreadsheet in SPSS (Version 23, International Business Machines, Armonk, NY, USA, 2015) and were cleaned prior to analysis. Demographic data and the performance measure scores for each type of body armour were initially analysed descriptively to derive means and standard deviations to summarise the data. Inferential analyses were then conducted using paired-samples t-tests to assess differences between the two types of body armour in associated scores on all performance measures. For comparing individual FMS scores associated with each type of body armour, a Wilcoxon signed rank test analysis was performed, consistent with the ordinal nature of the FMS component data. The overall level of significance was set a priori at 0.05.

The MBA used in this study on average weighed 6.4 kg, while the LEBA weighed 2.1 kg. There were no differences in weights of the body armour worn by each participant, within each body armour type, since all five of each type (MBA and LEBA) were of the same size. The average (mean) ± SD loaded weights of officers when they were wearing the two different types of vest comprising the body armour can be seen in Table 3.

Table 4 shows the results of the postural sway assessment. There were no significant differences between the two vests with respect to sway in the anterior–posterior direction, medial–lateral direction, the sway path length (SPL), or velocity of sway. For both vests, there were significant differences in both sway path length and velocity between the first five seconds and last five seconds (p < 0.05), with these measures increasing by 14.33% and 14.32%, respectively, for the MBA and 11.76% and 11.71%, respectively, for the LEBA.

As seen in Table 5, the agility scenario was completed by participants in an average of 21.32 ± 2.64 s while wearing the MBA and 20.65 ± 2.49 s while wearing the LEBA. This represents an average time difference between the two vests of 3.25%, and this was a statistically significant difference, t(9) = 4.65, p < 0.01. Along with exhibiting a significantly faster time, the lighter LEBA was rated by participants as being significantly less detrimental to performance during the agility task (t(9) = −2.819, p = 0.02).

In general, the LEBA received notably more positive comments regarding comfort than did the MBA (Figure 3 and Figure 4). The majority of negative comments regarding the MBA referred to: (a) discomfort around the throat and shoulders, especially when sitting (8 comments); (b) the MBA sitting on the belt or holster (6 comments); and (c) compression of the stomach (4 comments). It should be noted that one officer found the MBA to be comfortable around the shoulders, while another stated that they liked the shoulder padding and a third felt that the snug fit meant that the body armour did not pull down on the shoulders. Positive comments regarding the MBA included: (a) the fitting (3 comments) and design features (3 comments).
The negative comments reported by the officers in relation to wearing the LEBA all referred to fit (n = 4). The leading positive comments included: (a) comfort / less discomfort (n = 10); and (b) fit (n = 4). There were also a number of positive comments (n = 5) regarding the functionality of the vest (e.g., pockets, wide panels, plastic clips). Although there were only two neutral comments (neither positive nor negative) for the MBA, there were six for the LEBA. Of these six neutral comments, 50% were considerations of how the LEBA may feel if full operational loads and/or plates were added.

The participating officers found LEBA to be more comfortable than the MBA, and they were more positive in their subjective ratings of their own performance during agility and simulation tasks than when wearing the MBA. These subjective responses were supported by significantly faster agility course times when wearing the LEBA than when wearing the MBA, although there were no significant differences in the performance results for the simulation tasks. The MBA was also found to have a significant negative impact on movement quality, as measured by the FMS. The overall performance of officers was reduced to a level previously associated with an increased risk of injury in tactical populations and with failure in a tactical options assessment for LEOs. The results suggest that notable differences between MBA and LEBA exist and they should not necessarily be considered interchangeable, when LEO are considered. On this basis, LEBA specifically designed for law-enforcement as bespoke equipment is vital if the health and safety of officers is to be ensured.

The authors would like to thank Shane Irving and Jason Semple from Optimal Performance Solutions for their specialist assistance in the optimized fitting of the body armour. This study was supported by a grant from Australian Defence Apparel, led by Charlotte O’Connor.

R.O. and B.S. designed the study and collected the data. R.O. and R.P. analyzed the data and R.O., B.S. and R.P. were responsible for drafting, reviewing and editing the paper.

The authors declare no conflict of interest. The funding source had no role in the design of the study; in the collection, analyses, or interpretation of data; in the writing of the manuscript, and in the decision to publish the results. 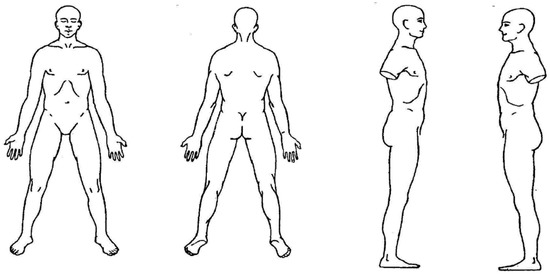 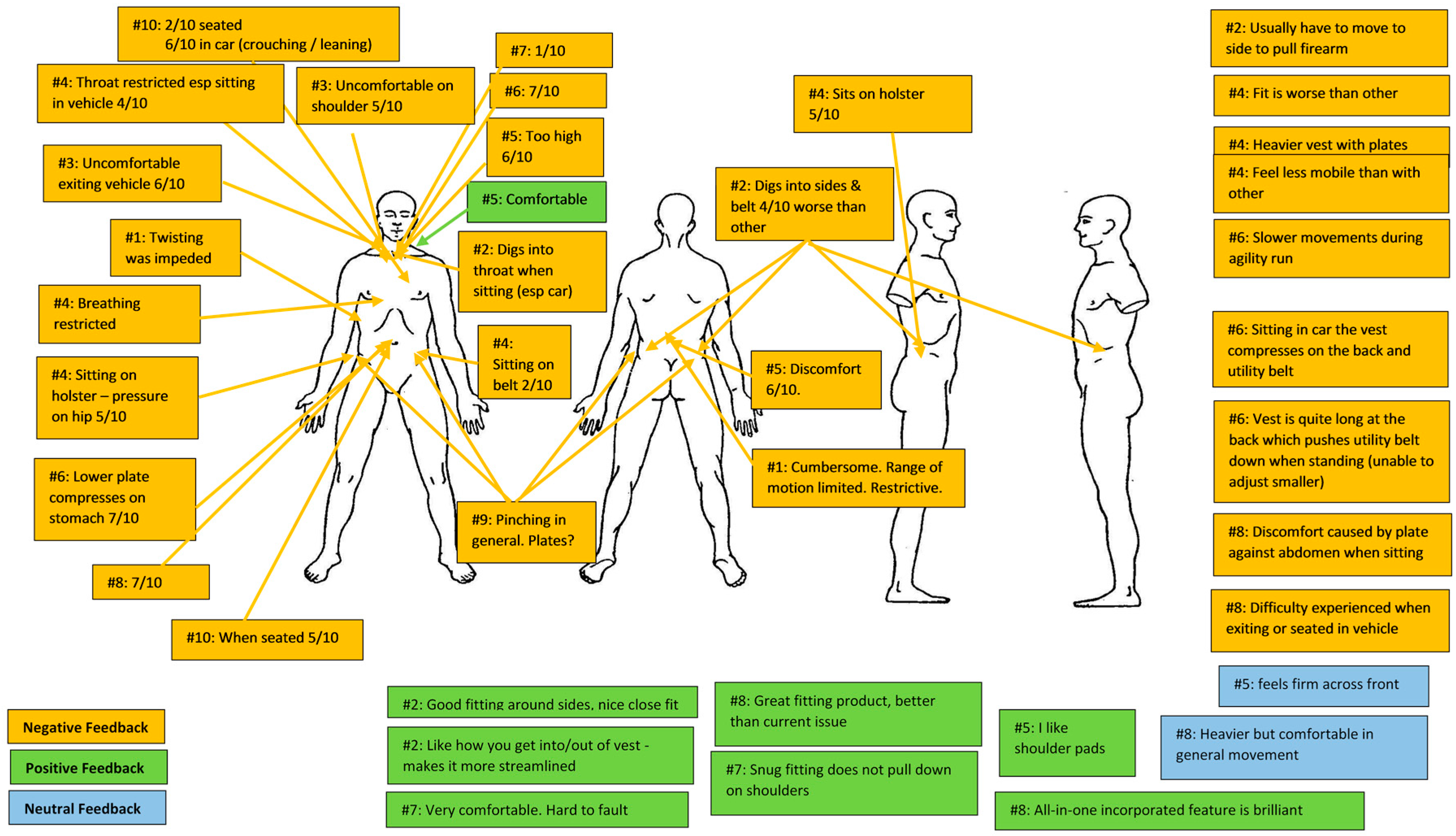 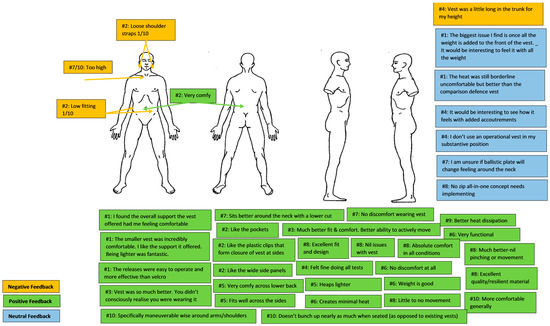 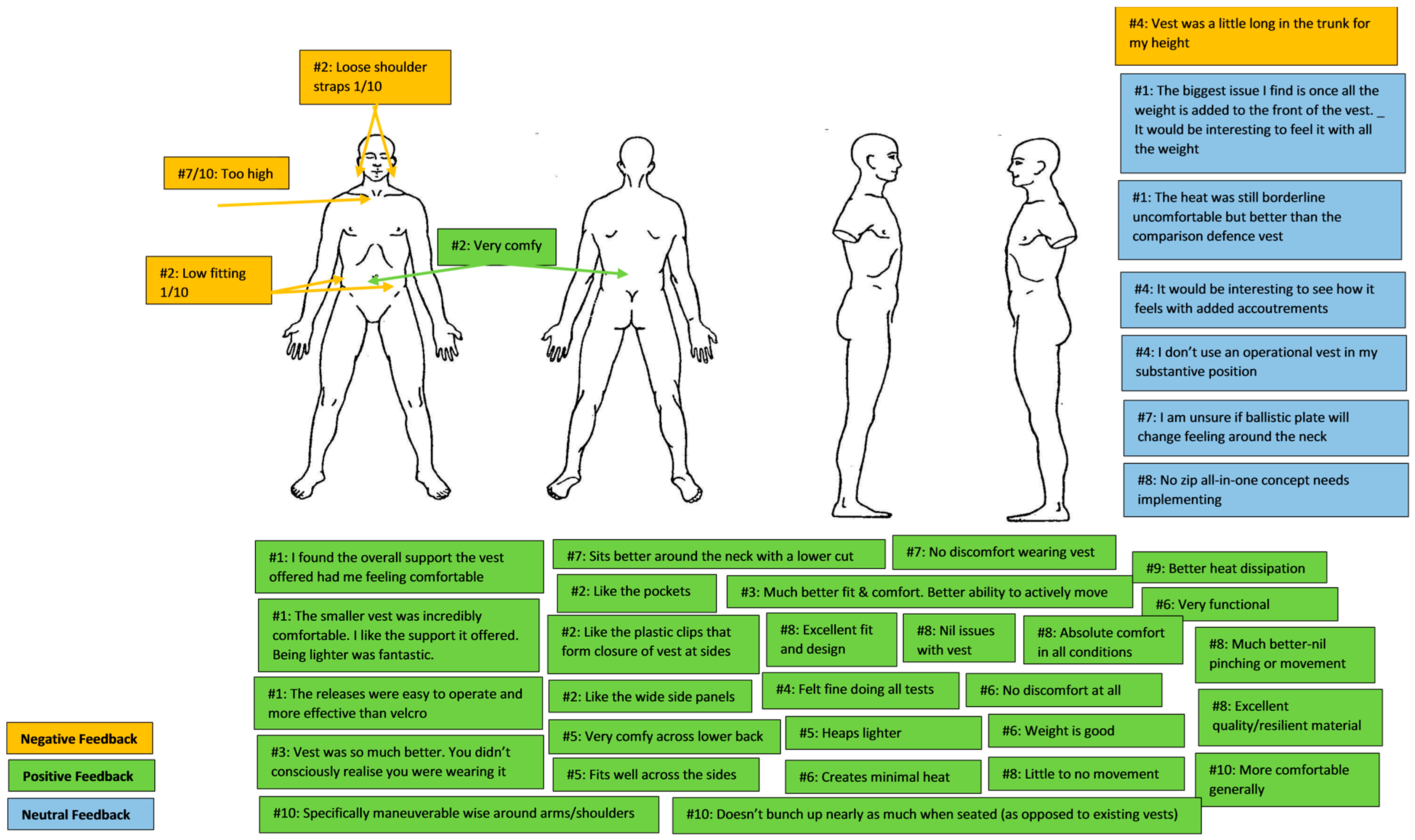