The Effect of a Leisure Time Physical Activity Intervention Delivered via a Workplace: 15-Month Follow-Up Study

In line with recommendations from both the World Health Organization and the European Union some employers encourage workplace health promotion through physical activity (PA) facilities and leisure time PA-initiatives. The current study describes a 15-month follow-up after an 8-week workplace delivered PA-initiative, investigates if improvements in cardiovascular risk status are sustainable, and elucidates differences according to educational level. One hundred and twenty one employees (43 women) were examined before and after the 8-week PA-initiative and 94 at the 15-month follow-up. PA-levels, blood pressure, resting heart rate, lipids, glycosylated hemoglobin (HbA1c), C-reactive protein (CRP), and selected markers of inflammation were registered at baseline, immediately after the 8-week PA-initiative, and 15 months after baseline. At the end of follow-up (15-month), PA-levels—increased during the 8-week intervention—had returned to baseline values. None of the five improvements in cardiovascular markers (total cholesterol, low density lipoprotein (LDL), P-selectin, CD40Ligand (CD40L) and Monocyte chemoattractant protein-1 (MCP-1)) seen at the 8-week follow-up were sustained. At the 15-month follow-up as compared to baseline HbA1c, CRP (log) and interleukin-6 (IL-6) were reduced by 0.06 mmol/L (95% CI −0.11,−0.01), 0.25 mg/L (95% CI −0.46,−0.04) and 0.39 pg/mL (95% CI −0.75, −0.04), respectively. At baseline, there were differences in cardiovascular risk factors comparing men with low versus high levels of education. No differences in changes in outcomes between these groups of men were found during follow-up. In this study highly educated men generally have lower levels of cardiovascular risk factors, but the effect of PA on such markers in this group do not differ from the effects seen in less educated men. View Full-Text
Keywords: physical activity; cardiovascular; occupational health physical activity; cardiovascular; occupational health
►▼ Show Figures 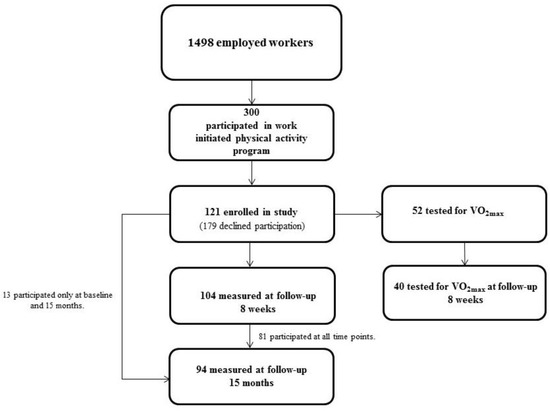