The Asbestos Ban in Korea from a Grassroots Perspective: Why Did It Occur?
Next Article in Special Issue

Examining the Impact of Maternal Individual Features on Children’s Behavioral Problems in Adoptive Families: The Role of Maternal Temperament and Neurobiological Markers

Air concentrations of and inhalation exposure to total petroleum hydrocarbons (TPH) and benzene was monitored separately at two oil refineries from 1977 to 2014. Prevention policies and control measures that may explain changes were surveyed. The aim was to evaluate how the application of of Occupational Health and Safety Assessment Series OHSAS 18001.04 principles as well as Environmental protection Agency EPA and European Oil Company Organisation for Environment, Health and Safety CONCAWE practices have influenced air concentrations. Benzene air concentrations declined in 11 of 17 units, six of which were associated with declining exposures. Benzene air concentrations declined across all units on average by 46%. This amounts to an average yearly decline of 1.7%. TPH air concentrations declined in 10 of 17 units, seven of which were associated with declining exposures. The average decline in TPH air concentrations was 49%, corresponding to 1.3% per year. As a result, average working day exposure in 10 of 17 units have declined significantly and today, benzene and TPH exposure in most units are well below 10% of the current Occupational Exposure Limit (OEL8h:s). A decline in air concentrations have coincided with consistent implementation of control measures. Such measures include on-line monitoring of leaks; benzene recovery; floating container roofs; improved valves and seals; hermetic pumps; recovery of loading gases and instalment of torches in terminals; cutback in coke combustion; a new production line spanning directly from the dock to aromatics production; and recovery of loading gases in the doc. Other tools in exposure management include personal leak monitors, on-line measurements, monitoring campaigns, risk assessment, and availability and user training of protective equipment. However, improvements are still needed. Hydrocarbon or benzene air concentrations have not declined in 8 of 17 units, in some of which concentrations exceed 10% of the relevant OEL8h value. In addition, for benzene even 10% of the current OEL, 0.1 ppm, might still possess a risk. With this in mind, methods to estimate exposure at the refineries need to be improved to enable measuring benzene concentrations <0.1 ppm. Shut downs of the refinery have been associated with peaks in exposure concentrations. Consequently, effort should be placed on safe working methods pertaining to shutdowns. Also, the connection and detachment of hoses continues to be problematic from the point of view of controlling exposure. View Full-Text
Keywords: oil refining; hydrocarbon exposure; best practices oil refining; hydrocarbon exposure; best practices
►▼ Show Figures 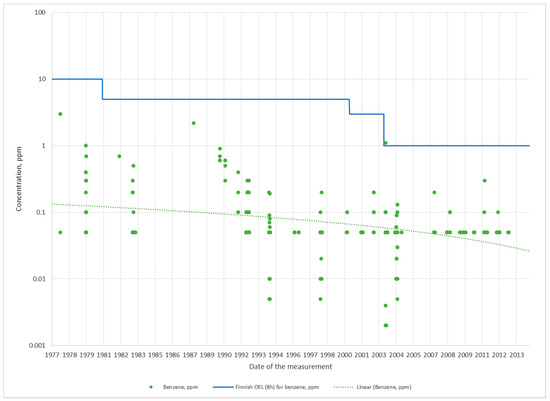