Treatment and Cost of Hepatocellular Carcinoma: A Population-Based Cohort Study in Taiwan
Next Article in Special Issue

Albert Nienhaus
1,2
1
Competence Centre for Epidemiology and Health Services Research for Healthcare Professionals (CVcare), University Medical Centre Hamburg-Eppendorf (UKE), Martinistraße 52, 20246 Hamburg, Germany
2
Department of Occupational Medicine, Hazardous Substances and Public Health, Institution for Statutory Accident Insurance and Prevention in the Health and Welfare Services (BGW), Hamburg, Germany
†
This article is dedicated to Prof. Dr. med. Friedrich Hofmann. For more than 30 years he advocated the protection of health workers from infectious disease. He made considerable inroads, as this article written in his honour proves. He died in September 2018 at the young age of 69. Our obligation is to continue his work.
Int. J. Environ. Res. Public Health 2018, 15(12), 2656; https://doi.org/10.3390/ijerph15122656
Received: 5 October 2018 / Revised: 14 November 2018 / Accepted: 20 November 2018 / Published: 26 November 2018
(This article belongs to the Special Issue Occupational Epidemiology)

Health workers (HWs) run an increased risk of infection. The standardised data set of an accident insurer was used to analyse the time trends of infection-related claims and confirmed occupational diseases (ODs) in HWs. The numbers of claims and confirmed claims for different infections were analysed for the years 1996 to 2017. The rate of claims and confirmed ODs were calculated per 100,000 full-time workers. The number of claims was relatively stable over time. However, the rate per 100,000 full-time workers decreased from 25.2 to 15.4. The decrease was most pronounced for hepatitis B and hepatitis C infections, which were the most frequent infections for which claims were made at the start of the period. In 2017, tuberculosis (TB)-related claims were more frequent than those related to blood-borne virus infections. However, the growing number of TB claims does not reflect an increased infection risk, but rather improved methods for the diagnosis of latent TB infection (LTBI). Measures to prevent blood-borne virus infections in HWs were successful in the last 22 years, but attention should be paid to newly emerging infections. View Full-Text
Keywords: health worker; infection; hepatitis; tuberculosis; occupational disease health worker; infection; hepatitis; tuberculosis; occupational disease
►▼ Show Figures 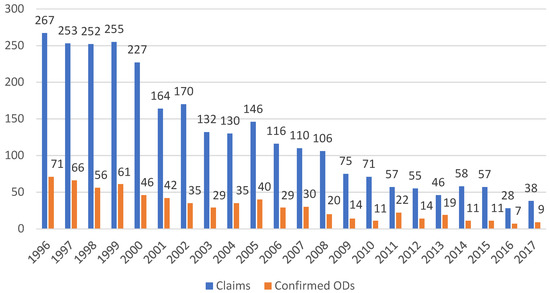