Parenting Practices as a Mediator in the Association Between Family Socio-Economic Status and Screen-Time in Primary Schoolchildren: A Feel4Diabetes Study
Previous Article in Journal

Differences in Context-Specific Sedentary Behaviors According to Weight Status in Adolescents, Adults and Seniors: A Compositional Data Analysis

Comparisons in Screen-Time Behaviours among Adolescents with and without Long-Term Illnesses or Disabilities: Results from 2013/14 HBSC Study

Reducing sedentary behaviours can help prevent non-communicable diseases, particularly among young adolescents with long term illnesses or disabilities (LTID). Much of young people’s voluntary sedentary time is related to screen-time behaviours (STBs) such as TV viewing, playing computer games, and using the computer for other activities. Although public health data on adolescents’ STB is growing, information about adolescents with LTID is currently lacking in a European context. The purpose of this study is to compare time on STBs between adolescents with and without LTID in European Countries through the HBSC 2013/14 study. Young adolescents (n = 61,329; boys 47.8%) from 15 European countries reported the time spent on TV viewing, playing computer games, and using the computer for other purposes on weekdays and the weekend. STBs were dichotomised based on international recommendations of less than 2 h per day, and Chi-square tests of independence were performed to investigate differences. STB time was combined to produce a sum score as dependent variable in multiple analysis of covariance with age and family affluence as covariates. There were statistically significant differences in computer gaming among boys and other computer use among girls for both weekdays and weekends, whereby adolescents with LTID reported higher use. In addition, both boys and girls with LTID spent more time on STBs than their same sex peers without LTID (Boys, F = 28.17, p < 0.001; Girls, F = 9.60, p = 0.002). The results of this study indicate a need for preventive strategies to address high levels of STB among young adolescents with LTID and reduce the risk of poor health outcomes associated with higher levels of sedentary behaviour. View Full-Text
Keywords: sedentary behaviours; screen time; children; HBSC; disability sedentary behaviours; screen time; children; HBSC; disability
►▼ Show Figures 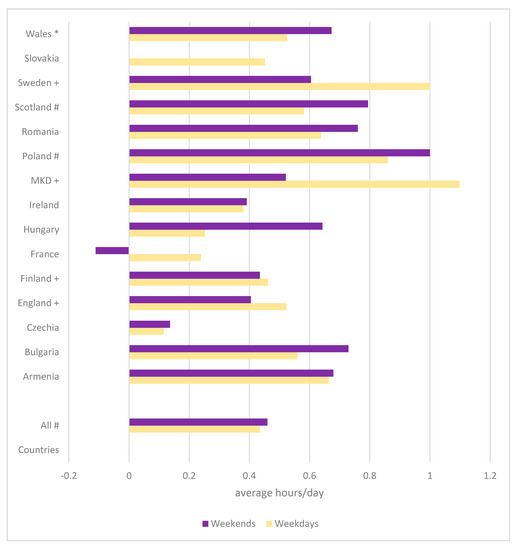 
Ng, Kwok W., Lilly Augustine, and Jo Inchley. 2018. "Comparisons in Screen-Time Behaviours among Adolescents with and without Long-Term Illnesses or Disabilities: Results from 2013/14 HBSC Study" International Journal of Environmental Research and Public Health 15, no. 10: 2276. https://doi.org/10.3390/ijerph15102276