Factors Associated with Maintaining the Mental Health of Employees after the Fukushima Nuclear Disaster: Findings from Companies Located in the Evacuation Area
Next Article in Special Issue

Influence of Land Use and Point Source Pollution on Water Quality in a Developed Region: A Case Study in Shunde, China
Previous Article in Special Issue

Antibiotic Susceptibility, Genetic Diversity, and the Presence of Toxin Producing Genes in Campylobacter Isolates from Poultry

Acinetobacter spp. occur naturally in many different habitats, including food, soil, and surface waters. In clinical settings, Acinetobacter poses an increasing health problem, causing infections with limited to no antibiotic therapeutic options left. The presence of human generated multidrug resistant strains is well documented but the extent to how widely they are distributed within the Acinetobacter population is unknown. In this study, Acinetobacter spp. were isolated from water samples at 14 sites of the whole course of the river Danube. Susceptibility testing was carried out for 14 clinically relevant antibiotics from six different antibiotic classes. Isolates showing a carbapenem resistance phenotype were screened with PCR and sequencing for the underlying resistance mechanism of carbapenem resistance. From the Danube river water, 262 Acinetobacter were isolated, the most common species was Acinetobacter baumannii with 135 isolates. Carbapenem and multiresistant isolates were rare but one isolate could be found which was only susceptible to colistin. The genetic background of carbapenem resistance was mostly based on typical Acinetobacter OXA enzymes but also on VIM-2. The population of Acinetobacter (baumannii and non-baumannii) revealed a significant proportion of human-generated antibiotic resistance and multiresistance, but the majority of the isolates stayed susceptible to most of the tested antibiotics. View Full-Text
Keywords: Acinetobacter; JDS3; river; water; carbapenemases Acinetobacter; JDS3; river; water; carbapenemases
►▼ Show Figures 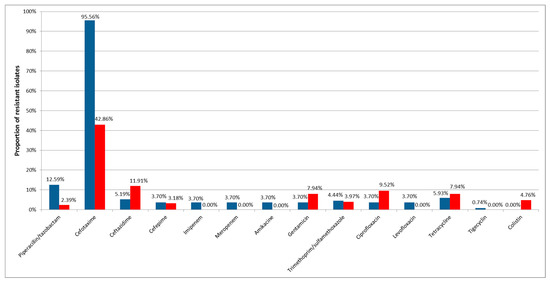