Examining the Impact of Maternal Individual Features on Children’s Behavioral Problems in Adoptive Families: The Role of Maternal Temperament and Neurobiological Markers
Previous Article in Journal

Association between Fetal Adipokines and Child Behavioral Problems at Preschool Age: The Hokkaido Study on Environment and Children’s Health

Many studies have examined the associations between maternal obesity and a wide range of mental health problems of their children, including emotional and behavioral problems [1,2,3,4]. In general, these studies support an association between maternal BMI and poor cognitive performance and increased risk of developing depression and anxiety, however, the relationship between maternal obesity and the risk of developing autism spectrum disorder (ASD) and attention deficit and hyperactivity disorder (ADHD) in their children is currently less clear [1]. We previously reported that maternal pre-pregnancy BMI ≥ 30 kg/m2 was a risk factor for increased child behavioral problems [5]. However, a mechanism connecting observed child behavioral problems and maternal obesity is largely unclear at this time.
One of the possible mechanisms to explain this can be inflammatory status. Obesity is considered a state of chronic inflammation and secretion of inflammatory biomarkers, including interleuikin-6 (IL-6) and tumor necrosis factor-α (TNF-α) [6]. It has been suggested that elevated levels of inflammatory markers were associated with ASD, ADHD and other neurodevelopmental disorders [3]. Thus, inflammation is an important potential mechanism. Metabolic hormone-induced programming can be another possible mechanism. It is known that there is maternal fetal transmission of leptin, a metabolism-related hormone [7]. Several studies have suggested that leptin levels are associated with psychopathology [8]. Lappas et al. found that leptin activated proinflammatory cytokine release and phospholipid metabolism in human placenta and suggested that leptin may indirectly influence brain development [9].
There have been studies that investigated levels of metabolic hormones, including adiponectin and leptin, in association with mental and neurobehavioral problems such as ASD [10,11] and ADHD [12,13]. These studies have suggested that changes in lipid metabolism are a key to understanding the etiology of neurobehavioral problems, yet the mechanism is mostly unknown. Cross-talk between adipokines, including inflammatory cytokines and metabolic hormones secreted from adipose tissue and the central nervous system needs to be further investigated. Fetal adipokines may potentially contribute to child neurobehavioral development. Thus, the aim of this study was to investigate a possible association between fetal adipokine levels and child behavioral problems at preschool age in a prospective study.

This study was one of the follow-up studies of a prospective birth cohort study, the Hokkaido Study on Environment and Children’s Health. The details of the cohort profile can be found elsewhere [14,15,16]. Briefly, the whole cohort included 20,926 pregnant women who enrolled in the study from 2003–2012. A sub-cohort population (23.3% of the whole cohort) designated for exposure and/or biomarker assessments was determined. It is considered to be effective to apply sub-cohort study design for exposure and biomarker assessment. The details of the sub-cohort population can be found elsewhere [17]. The follow-up study targeted those who were born between April 2008 and May 2010 (n = 3896) and have reached the age of 5 years. Strength and Difficulties Questionnaire (SDQ) to assess child neurobehavioral development was distributed via mail to the follow-up study population. Among 3896 participants in the follow-up study, 2079 responded by the end of May 2016. Among the 2079 with valid responses, 495 were from the sub-cohort population. Among the 495 sub-cohort population, we excluded those who did not have cord blood samples for biomarker measurements (n = 134), thus, for the final analysis, 361 participants were included. The flowchart of how the study population was selected was shown in Figure 1.
This study was conducted with the informed consent of all participants on written forms. The protocol used in this study was approved by the Institutional Ethical Board for epidemiological studies at the Hokkaido University Graduate School of Medicine and Hokkaido University Center for Environmental and Health Sciences on 22 March 2012 (Project ID code; 17-90).

The Japanese parent-report version of SDQ [18] was distributed via mail to the participants. Parents were asked to fill out the SDQ, which included 25 items on specific strengths and difficulties with an overall rating of whether their child had behavioral problems. Each item has three response categories: (0) not true; (1) somewhat true and (2) certainly true. It includes five subscales (conduct problems, hyperactive/inattention, emotional problems, peer problems and prosocial behavior problems). All subscales excluding pro-social behavior problems were summed to assess the behavioral problems and the total difficulties score (TDS) ranged from 0–40 [19]. Higher scores denote greater problems. SDQ was designed for a broad range of children, age 3–16 years and well-validated tool of childhood mental health [19,20].
We applied score bandings of the Japanese version of SDQ, children with TDS 0–12 were defined as normal, 13–15 were as borderline and 16–40 were as clinical. In this study, children scored ≥13 were defined as likelihood of behavioral problem [18]. For the subscales, the following cut-offs were applied; Conduct problems: 0–3 = normal, 4 = borderline, 5–10 = clinical; Hyperactivity/inattention: 0–5 = normal, 6 = borderline, 7–10 = clinical; Emotional problems; 0–3 = normal, 4 = borderline, 5–10 = clinical; Peer problems: 0–3 = normal, 4 = borderline, 5–10 = clinical; Prosocial behavior; 6–10 = normal, 5 = borderline, 0–4 = clinical [18]. SDQ total and subscale scores were dichotomized comparing the children with borderline and clinical scores with normal children.

Cord blood samples were obtained at delivery and stored at −80 °C until the analysis. We measured total and high molecular weight (HMW) adiponectin and leptin, TNF-α, and IL-6 levels in cord blood were measured. Both total and HMW adiponectin levels were determined by Enzyme Linked ImmunoSorbent Assay (ELISA) using Human Adiponectin Assay kit from Sekisui Medical Co. Ltd. (Tokyo, Japan). Leptin levels were determined by radioimmunoassay (RIA) using a Human Leptin RIA kit from Linco Research Inc. (St. Charles, MO, USA). TNF-α levels were determined by Chemiluminescent Enzyme Immunoassay (CLEIA) using a Quanti Glo Human TNF-α Chemiluminescent Immunoassay 2nd generation kit from R&D Systems (Minneapolis, MN, USA). IL-6 levels were also determined by CLEIA using a Quanti Glo Human IL-6 Immunoassay 2nd generation kit from R&D Systems. All the analyses were conducted at LSI Medience (Tokyo, Japan) according to the operation manual. The limit of detection (LOD)s of adiponectin was 0.39 μg/mL, of leptin was 0.5 ng/mL, of TNF-α was 0.55 pg/mL, and of IL-6 was 0.3 pg/mL. Intra- and inter-assay CVs for total adiponectin were 7.6–9.1% and 7.8–10.1%, for HMW adiponectin were 6.0–9.2% and 6.8–11.6%, for leptin were 2.8–5.3% and 6.3–8.1%, for TNF-α were 3.2–3.6% and 5.3–6.2%, and for IL-6 were 1.5–7.4% and 3.5–10.5%, respectively.

Information on covariates were obtained from questionnaires which were filled out by pregnant women at the 1st trimester, birth records and follow-up questionnaires at age of SDQ completed. Covariates were determined based on both the previous literature [5,21,22,23] and statistical significance (p < 0.05) by t-test or chi square test as follows; parity, maternal smoking at the 1st trimester, maternal age, maternal education, annual family income at SDQ completed and child sex.

Cord blood adipokine levels did not distribute normally, thus these values were log10 transformed. The values of adipokine below LOD were replaced as one half the value of LOD for statistical analyses. The logistic regression models were adjusted for the above-mentioned covariates. The odds (ORs) were given for one unit increase on log10 scale of adipokine levels. Statistical analyses were performed using SPSS 22.0J (IBM Japan, Tokyo, Japan). Two side p value < 0.05 was considered statistically significant.

Our findings suggest that cord blood adipokine, particularly, leptin levels can be a predictor of hyperactivity/inattention problem at preschool age. In addition, this was the first study to investigate association between cord adiponectin levels and child behavioral problems in a prospective manner. Further prospective epidemiological studies are warranted to confirm whether these biomarkers can be predictors of child neurobehavioral outcomes. 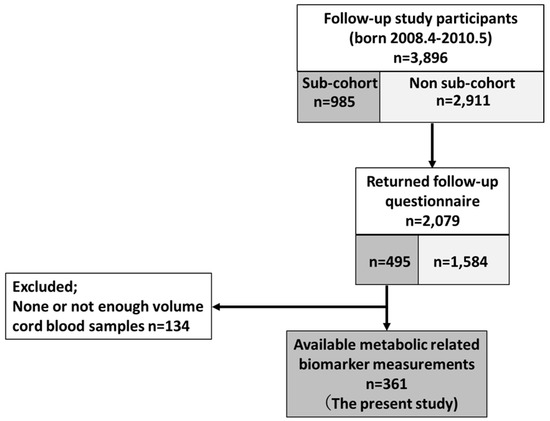