In August 2008, an incidental gaseous release of I-131 occurred at the Institute for Radio-Elements (IRE) situated in the nuclear site of Fleurus. Following the incident, the Belgian Minister of Social Affairs and Public Health commissioned a study to assess, by means of an epidemiological study at the national level, the possible health risks for populations living in proximity of nuclear power plants or other facilities that can be at the origin of a leak of radioactive material. An ecological study was performed over the period 2000–2008 to assess the possible risk of thyroid cancer for people residing near nuclear sites [1,2]. For two of the four Belgian sites (Mol-Dessel and Fleurus), the incidences of thyroid cancer within the 20-km proximity area were higher than expected.
Exposure to ionizing radiation, particularly during childhood, is the best-established risk factor associated with thyroid cancer [3]. Significantly increased risks for developing thyroid carcinomas following radiation exposure during childhood were observed among people treated by radiotherapy or exposed in nuclear accidents or among survivors of the atomic bombings. For example, a direct consequence of the Chernobyl disaster was an increase in the number of thyroid cancers in children during the years following the accident [4]. Ionizing radiation can also cause thyroid cancer in adults, but will occur after exposures to higher doses [5]. The risk in Japanese A-bomb survivors is marginally elevated [6]. The radionuclide I-131 is known to be a major contributor to thyroid cancer risk in case of nuclear accidents [7].
The present study follows the recommendations resulting from the previous one, which were: “To repeat the epidemiological monitoring within five years, since by that time more cancer data will have become available.” The previous analyses were then replicated for the period 2000–2014. The investigation particularly focused on the question of whether thyroid cancer incidence is higher than expected in the vicinity of the nuclear sites in Belgium. In addition, the hypothesis of a gradient in thyroid cancer incidence with increasing levels of surrogate exposures (proximity, prevailing wind from the nuclear site, and I-131 doses estimated by mathematical modeling) were explored.

Thyroid cancer incidence data were selected from the Belgian Cancer Registry (BCR), a national population-based registry. Data was available from 2000 to 2014 for the Flemish Region (the northern part of Belgium) and from 2004 to 2014 for the Brussels-Capital Region and the Walloon Region (the southern part of Belgium) at the level of the communes. Belgium has a total of 589 communes, divided over the Flemish Region (n = 308; 6,410,705 inhabitants in 2014), Walloon Region (n = 262; 3,576,325 inhabitants in 2014), and Brussels-Capital Region (n = 19; 1,163,486 inhabitants in 2014). The incidence year, sex, age, and place of residence at diagnosis were used to characterize the cancer diagnosis.
Population counts of the communes by age and sex were obtained from the population registers of the Federal Public Service Economy, Directorate-General Statistics and Economic Information for the period 2000–2014.

The nuclear sites under study are Doel (Flemish Region), Tihange (Walloon Region), Mol-Dessel (Flemish Region), and Fleurus (Walloon Region), the four Belgian nuclear sites containing facilities of class 1 defined as facilities with the highest radiologic risk [8]. Doel and Tihange are electricity-generating nuclear power plants. The nuclear site of Mol-Dessel primarily consists of the Belgian Nuclear Research Centre (SCK-CEN) and hosts a combination of nuclear activities (applied research and metrology, scientific and technological research, operational waste management). The nuclear site of Fleurus primarily consists of the IRE, one of the major production sites of radioiodines for usage in diagnostic and therapeutic nuclear medicine in Europe. IRE is therefore a major potential source of I-131 emissions (see [2], for a more detailed description of the sites).

The proximity area of a nuclear site was constructed as the aggregation of communes having their centroid lying within a circle of 20 km radius centered on the site. As the choice of the proximity area is to a certain extent arbitrary [9] and for comparison with the literature, proximity areas with a 0–5, 0–10, and 0–15 km and with a 5–10, 10–15, and 15–20 km radius were additionally considered.

Data on wind direction and speed between 2003 and 2014 were collected using survey stations by the Belgian Federal Agency for Nuclear Control (FANC). Wind velocity measurements below 0.2 m/s are associated with unstable and continuously changing wind directions and thus were not considered. Wind directions were converted into 16-sector compass roses and based on its centroid, each commune was assigned to a sector. The frequency (in percentage) of the wind blowing from the site toward the sector of the commune was then calculated.

I-131 doses to the thyroid (in Sieverts) were calculated for the sites of Mol-Dessel and Fleurus since they showed a significant increasing incidence with distance or prevailing winds, or both (see Results). Estimates were calculated by the FANC with Hotspot (University of California, Lawrence Livermore National Laboratory—UC LLNL, Livermore, CA, USA, Hotspot version 2.07 [10]) assuming standard releases (total activity: 1015 Bq), average meteorological conditions (wind speed: 3 m/s; annual percentage rain fall: 5%), and release height of 80 m for Mol-Dessel and 35 m for Fleurus. The model assumes that dispersion in the upwind and cross-wind direction takes the form of a Gaussian curve, with the maximum concentration in the centre of the plume. The model further assumes that a steady state exists in the radioactive discharges and the meteorological conditions. Finally, the exposure at every commune’s centroid consists of the simulated exposures expressed as a function of distance from the source multiplied by the wind direction frequencies (in %).

Thyroid cancer incidence was first explored in function of age (5-year age groups), sex, incidence year, and geographical location. The occurrence of thyroid cancer as a function of age and sex was investigated by calculating age- and sex-specific incidence rates. Regional incidences were explored by calculating the age- and sex-standardized rates (European Standard Population). Ninety-five percent confidence intervals (CIs) were calculated by Poisson approximation. In addition, to investigate the thyroid cancer incidence after the Fleurus incident, we calculated the age- and sex-standardized rates for the period 2004–2007 and for the period 2008–2014 in the 0–20 km proximity area around Fleurus, for all ages and for ages less than 20 years. All incidences are expressed as the number of new cases per 100,000 persons per year.

Adjusted Rate Ratios (RRs) were obtained from Poisson regressions. The model included proximity to the nuclear site, age (5-year groups), a quadratic term for age group, sex, incidence year, and region (Walloon and Brussels—Capital Regions vs. Flemish Region). To reflect age and sex differences as well as incidence year and regional differences, interaction terms between age and sex and between incidence year and region were included as well. To account for overdispersion, the model was fitted using the quasi-likelihood approach with the Pearson-based overdispersion parameter [11].

2.3.3. Association between Surrogate Exposures and Incidence of Thyroid Cancer around Nuclear Sites

Surrogate exposures considered were the inverse residential distance from nuclear site, the prevailing winds, and the simulated discharges. To test the hypothesis of a positive gradient in thyroid cancer with increasing levels of each surrogate exposures, three focused hypothesis tests were performed: (a) the conditional form of Stone’s test fixing the total number of cases observed within the proximity area [12]; (b) the conditional form of Bithell’s Linear Risk Score test (LRS) [12] with these exposure as scores θi; and (c) the conditional form of Bithell’s Linear Risk Score test (LRS rank) with corresponding ranks. The advantage of Stone’s test is that it is invariant to monotonic transformations of the “exposure” variable and as such, avoids the need to specify the “exposure”-response relationship. The LRS tests are, compared to Stone’s test, more powerful in case the scores properly reflect the “exposure” effect, but assumptions are made regarding the scale of the “exposure” effect when defining the scores θi. Monte Carlo simulations from the multinomial distribution with 5000 iterations were performed to obtain the p-values of the tests.
Finally, the shapes of the exposure–response relationships were investigated. To this end, generalized additive models [13] were used. In particular, the Poisson regression model described above was extended by allowing the previously assumed constant RR to vary smoothly as a function of exposure. The smooth function was taken to be a B-splines basis of 10 B-splines of third degree with a second-order discrete smoothness penalty to control for overfitting [14] (see [1] for a more detailed description of the statistical methodology).
The analyses were generated using SAS software (version 9.3, SAS Institute Inc., Cary, NC, USA) and R software version 3.3.2 (R Core Team, Vienna, Austria) [15].

Overall, 9881 cases of thyroid cancer were registered by the BCR between 2000 and 2014. The age- and sex-specific incidence rates of thyroid cancer are presented in Figure 1. Rates were higher for women than for men, the differences being significant for the ages ranging from 10 to 79 years. Age- and sex-specific incidence rates were higher among middle-aged people. The European standardized incidence rates of thyroid cancer (Figure 2) were significantly lower in the Flemish Region as compared to the Walloon and Brussels-Capital Regions for the whole period. The three Regions showed increasing incidences over time, this trend being significant only in the Flemish Region. In the vicinity of Fleurus, the age- and sex-standardized rates for the periods 2004–2007 and 2008–2014 were not significantly different: resp. 11.1 (95% CI: 9.7–12.5) and 11.5 (95% CI: 10.5–12.6) for all ages, resp. 0.75 (95% CI: 0.01–1.49) and 0.85 (95% CI: 0.26–1.43) for ages less than 20 years.

3.3. Association between Surrogate Exposures and Incidence of Thyroid Cancer around Nuclear Sites

This study strengthens earlier findings and suggests increased incidences in thyroid cancer around the nuclear sites of Mol-Dessel and Fleurus, the two nuclear sites with research and industrial activities. Further analyses will be performed at a more detailed geographical level.

This study is carried out in the framework of the tasks of the Scientific Institute of Public Health (WIV-ISP). As a scientific institute, costs for open access publications are foreseen in the WIV-ISP policy.

The idea and contents of the article emerged from discussions among the authors. An Van Nieuwenhuyse, Kaatje Bollaerts, and Tom De Smedt conceived and designed the study. Harlinde De Schutter, Michel Sonck, Nancy Van Damme, Lodewijk Van Bladel, and Geert Molenberghs contributed to materials and analysis tools. Claire Demoury and Tom De Smedt analyzed the data, and Claire Demoury wrote the paper. All authors contributed to the subsequent revisions and approved the final version. 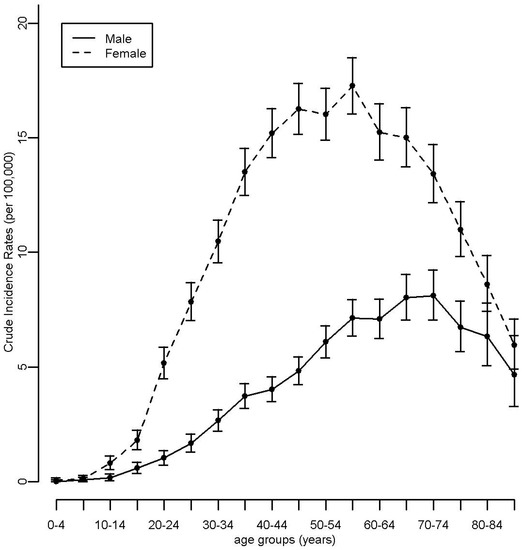 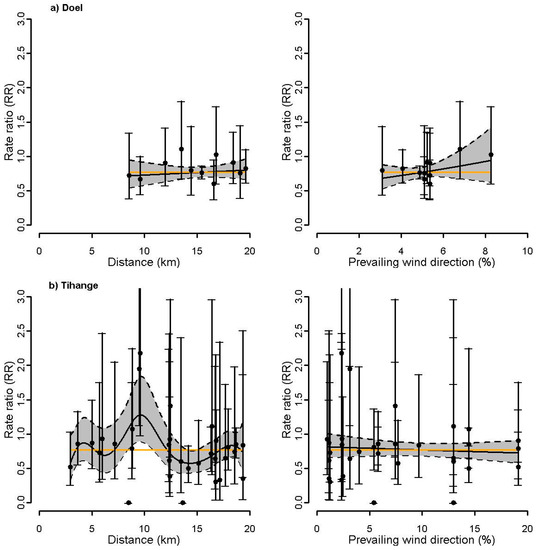 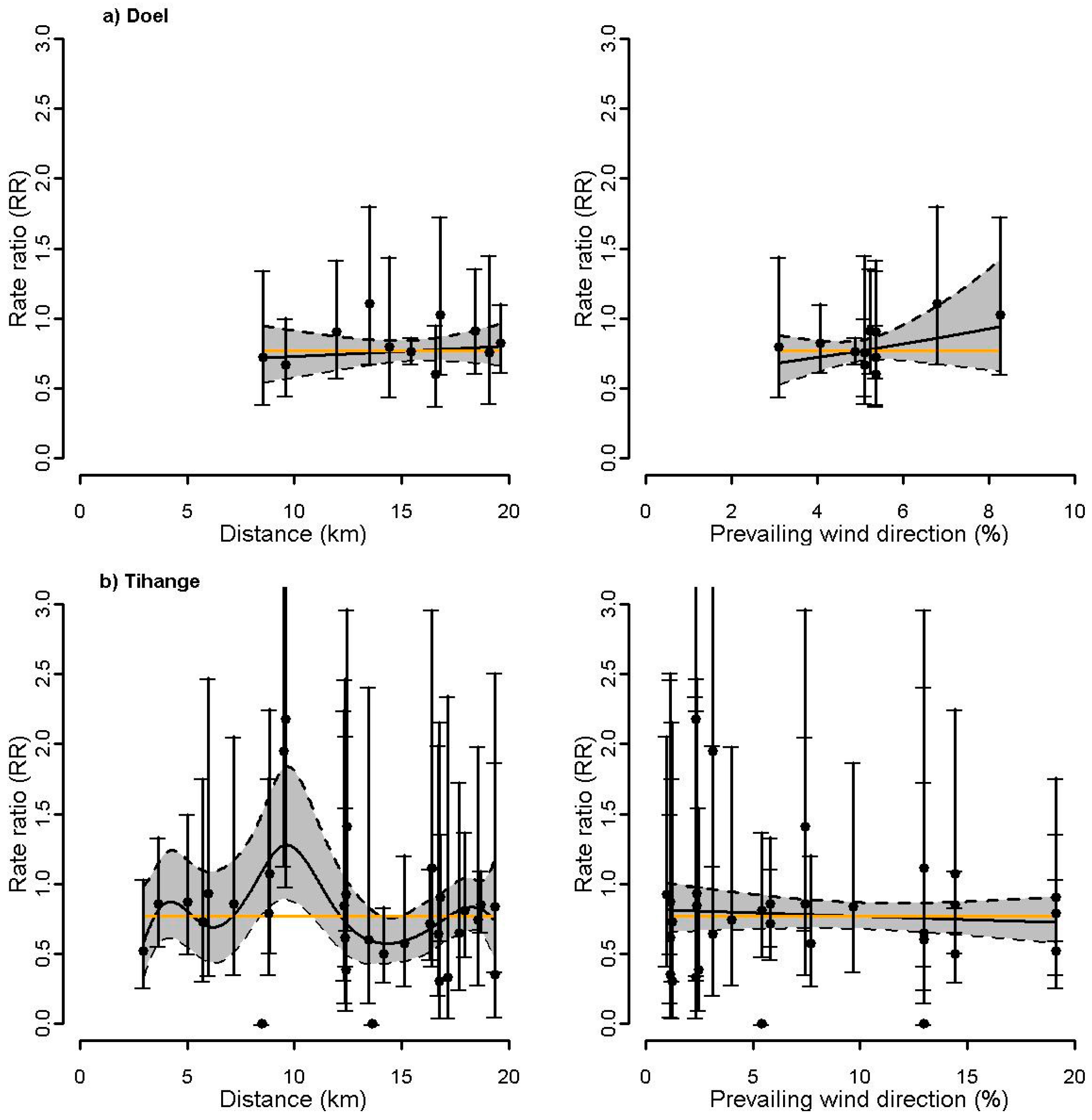 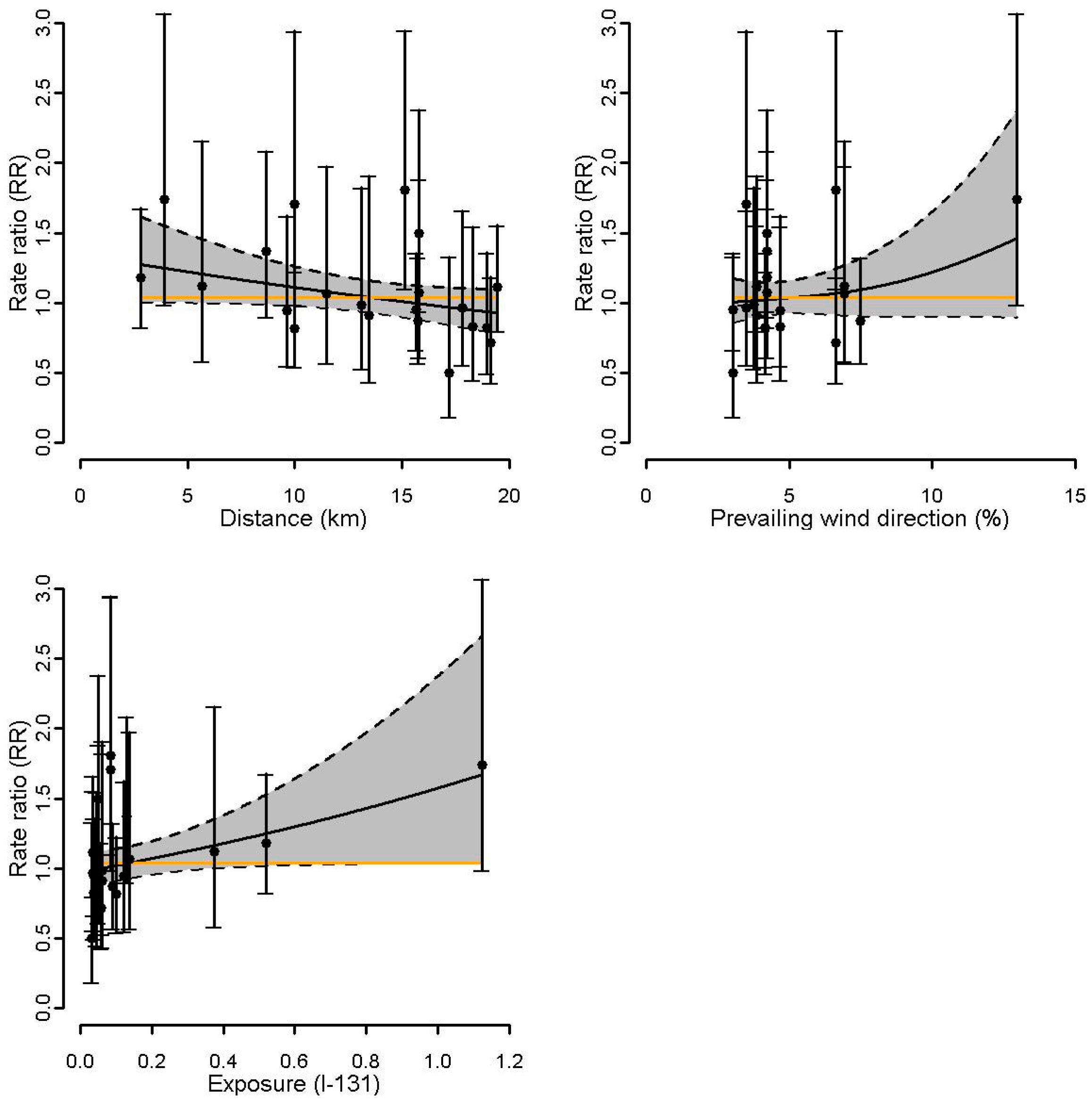 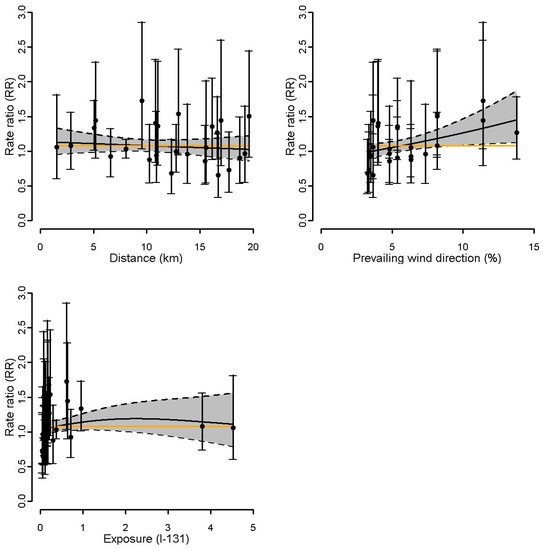