Heat Health Messages: A Randomized Controlled Trial of a Preventative Messages Tool in the Older Population of South Australia
Previous Article in Journal

I Walk My Dog Because It Makes Me Happy: A Qualitative Study to Understand Why Dogs Motivate Walking and Improved Health
Previous Article in Special Issue

Heat Exposure and Maternal Health in the Face of Climate Change

This research analyzed the relationship between extreme heat and Emergency Medical Service (EMS) calls in King County, WA, USA between 2007 and 2012, including the effect of community-level characteristics. Extreme heat thresholds for the Basic Life Support (BLS) data and the Advanced Life Support (ALS) data were found using a piecewise generalized linear model with Akaike Information Criterion (AIC). The association between heat exposure and EMS call rates was investigated using a generalized estimating equations with Poisson mean model, while adjusting for community-level indicators of poverty, impervious surface, and elderly population (65+). In addition, we examined the effect modifications of these community-level factors. Extreme-heat thresholds of 31.1 °C and 33.5 °C humidex were determined for the BLS and ALS data, respectively. After adjusting for other variables in the model, increased BLS call volume was significantly associated with occurring on a heat day (relative rate (RR) = 1.080, p < 0.001), as well as in locations with higher percent poverty (RR = 1.066, p < 0.001). No significant effect modification was identified for the BLS data on a heat day. Controlling for other variables, higher ALS call volume was found to be significantly associated with a heat day (RR = 1.067, p < 0.001), as well as in locations with higher percent impervious surface (RR = 1.015, p = 0.039), higher percent of the population 65 years or older (RR = 1.057, p = 0.005), and higher percent poverty (RR = 1.041, p = 0.016). Furthermore, percent poverty and impervious surface were found to significantly modify the relative rate of ALS call volumes between a heat day and non-heat day. We conclude that EMS call volume increases significantly on a heat day compared to non-heat day for both call types. While this study shows that there is some effect modification between the community-level variables and call volume on a heat day, further research is necessary. Our findings also suggest that with adequate power, spatially refined analyses may not be necessary to accurately estimate the extreme-heat effect on health. View Full-Text
Keywords: extreme heat; climate change; emergency medical service calls; ambulance calls; community-level characteristics extreme heat; climate change; emergency medical service calls; ambulance calls; community-level characteristics
►▼ Show Figures 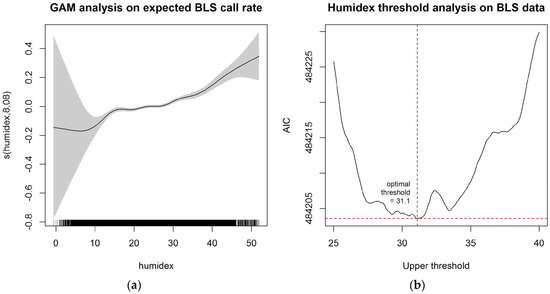