Why Do People Like Loud Sound? A Qualitative Study

Many people choose to expose themselves to potentially dangerous sounds such as loud music, either via speakers, personal audio systems, or at clubs. The Conditioning, Adaptation and Acculturation to Loud Music (CAALM) Model has proposed a theoretical basis for this behaviour. To compare the model to data, we interviewed a group of people who were either regular nightclub-goers or who controlled the sound levels in nightclubs (bar managers, musicians, DJs, and sound engineers) about loud sound. Results showed four main themes relating to the enjoyment of loud sound: arousal/excitement, facilitation of socialisation, masking of both external sound and unwanted thoughts, and an emphasis and enhancement of personal identity. Furthermore, an interesting incidental finding was that sound levels appeared to increase gradually over the course of the evening until they plateaued at approximately 97 dBA Leq around midnight. Consideration of the data generated by the analysis revealed a complex of influential factors that support people in wanting exposure to loud sound. Findings were considered in terms of the CAALM Model and could be explained in terms of its principles. From a health promotion perspective, the Social Ecological Model was applied to consider how the themes identified might influence behaviour. They were shown to influence people on multiple levels, providing a powerful system which health promotion approaches struggle to address. View Full-Text
Keywords: loud music; noise-induced hearing loss; ecological model loud music; noise-induced hearing loss; ecological model
►▼ Show Figures 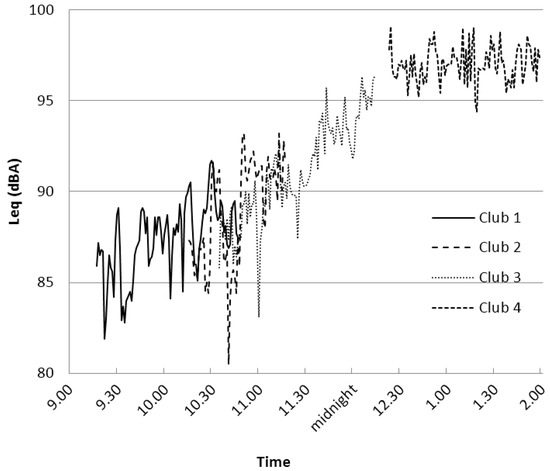