The health burden from heatwaves is expected to increase with rising global mean temperatures and more extreme heat events over the coming decades. Health-related effects from extreme heat are more common in elderly populations. The population of Europe is rapidly aging, which will increase the health effects of future temperatures. In this study, we estimate the magnitude of adaptation needed to lower vulnerability to heat in order to prevent an increase in heat-related deaths in the 2050s; this is the Adaptive Risk Reduction (ARR) needed. Temperature projections under Representative Concentration Pathway (RCP) 4.5 and RCP 8.5 from 18 climate models were coupled with gridded population data and exposure-response relationships from a European multi-city study on heat-related mortality. In the 2050s, the ARR for the general population is 53.5%, based on temperature projections under RCP 4.5. For the population above 65 years in Southern Europe, the ARR is projected to be 45.9% in a future with an unchanged climate and 74.7% with climate change under RCP 4.5. The ARRs were higher under RCP 8.5. Whichever emission scenario is followed or population projection assumed, Europe will need to adapt to a great degree to maintain heat-related mortality at present levels, which are themselves unacceptably high, posing an even greater challenge.
Keywords: adaptation; climate change; health; heat; Europe adaptation; climate change; health; heat; Europe

Ambient temperature, particularly extremes thereof, affects people’s health in most parts of the world. Individuals and communities in many European countries have experienced adverse health impacts from exposure to high ambient temperatures over the last 15 years [1,2,3]. Although studies found that population vulnerability to extreme heat has decreased over recent decades as global mean surface temperatures increased [4,5,6], other studies found unclear patterns [1]. Whether vulnerability will decline over future decades is an open question. Reasons typically mooted for any decline in vulnerability are increased access to air conditioning, individual acclimatization, changes to the built environment, and perhaps early warning and response systems. Vulnerability trends, and their interactions with climate change, will be a key driver of the magnitude and pattern of adaptation needed to increase local and national resilience to climate change.
The frequency, intensity, and duration of temperature extremes are projected to increase with climate change [7,8], with associated increases in morbidity and mortality. The warming of the climate in the coming century will be faster than in the last, which means that future populations might not be able adapt at the same rate as past populations [6].

As climate change progresses, the extent to which adaptation will be needed to protect and promote population health will likely increase. Different measures will be plausible and preferable in different countries because of underlying factors such as demographics, prevalence of chronic disease, appropriateness of societal infrastructure for higher temperatures, governance structures, and other factors. Within this context, we estimate for European regions how much adaptation would be needed, in different age-groups, to lower vulnerability under different scenarios of climate change in order not to see an increase in heat-related deaths.

Temperature and humidity were extracted from 18 future climate realizations from the Coordinated Regional Climate Downscaling Experiment (EURO-CORDEX) scenarios for Europe [9]. For these climate scenarios, dynamical downscaling was conducted with the Rossby Centre regional atmospheric model RCA4 [10], forced on the boundary by nine global climate models (GCMs) and two future greenhouse gas emission scenarios. Greenhouse gas emissions evolve based on the representative concentration pathways (RCPs) [11,12,13]: RCP 4.5 [11,14] and RCP 8.5 [12,15] from 2006 and onward, and by historical conditions for the period before that. Both were assessed by the Intergovernmental Panel on Climate Change (IPCC) [16], where RCP 8.5 is a pessimistic scenario and RCP 4.5 is more optimistic. The climate scenarios used, based on these emission scenarios, are described in detail in [10] and [17]. The period 1981–2010 was chosen as the reference period and the period 2036–2065 was chosen to project future risks. The climate data have a resolution of approximately 50 × 50 km covering Europe.
An evaluation of RCA4 [10] forced by observed meteorology [18] in the present climate shows small differences in temperature compared with observations, but with a slightly over-enhanced seasonal temperature cycle. The ensemble mean of the RCA4 downscaling of the nine GCMs is only 0.5 °C colder than RCA4 forced by measurements, but with large variation between the ensemble members (from −2 °C to 0.5 °C compared to RCA4 forced by measurements).

The population data and future scenarios were gridded datasets at 50 × 50 km compiled in the Integrated Assessment of Health Risks of Environmental Stressors in Europe (INTARESE) and Health and Environment Integrated Methodology and Toolbox for Scenario Development (HEIMSTA) projects [19]. The data were divided into 5-year age groups and separated by gender up to 65 years of age where data were aggregated into a 65+ age group. A scenario assuming a medium population growth rate was used for 2050. To estimate exposure to high ambient temperature, the climate grid cell closest to each population grid cell was assigned as the exposure for that population. The population data were limited to 29 countries in the European region.

We estimated to what degree overall adaptation, biological or societal, would be needed to reduce the health impacts of heat to maintain heat-related mortality at a present-day level. The extent of adaptation needed was calculated from increased exposure and changing population. To estimate impacts, we applied the exposure-response relationships from a European multi-city study [1]. In that study, the estimated relative risk was calculated by comparing heat-related mortality at the 75th and 99th percentile of summer mean temperatures.
For each of the population grids, we calculated the 75th and the 99th percentiles of the daily mean summer temperatures for each of the nine climate models for the baseline period 1981–2010. For day i in grid j an exposure Eij was calculated by assigning 0 to all temperatures below the 75th percentile, and 1 if the temperature equaled the 99th percentile. Because the epidemiological study only compared the change in mortality between the two temperature thresholds, it was not clear how to estimate the risk increases between the temperature intervals. By assuming a linear increase in relative risk between the percentiles and beyond, temperatures above the 75th percentile were assigned values accordingly. The impact in grid j was then calculated as: where Eij is the exposure measure in grid j at time i, Popj is the population in grid j and PopR is the population in the region to which the estimates were weighted by and aggregated to. This results in a grid of calculated impacts for Europe. The estimates were calculated for each of the 29 countries in the study, as well as for Northern, Western, Southern and Eastern regions of Europe per the United Nation definition of the European regions from the Standard Country or Area Codes for Statistics Use [20].
As a baseline, the calculated mortality impacts from present-day climate were used. The future projections were based on changes in climate, population and demographic composition, jointly and separately to estimate the individual effects of each. These impacts were then compared with the baseline estimates to calculate the extent of adaptation needed to maintain the current level of heat-related mortality with higher temperatures and different populations. The analyses were carried out considering the change in total population, as well as changes in the population above 65 years of age only. This was done to estimate the adaptation needs among the elderly population, who are more vulnerable to high ambient temperatures.
We calculated an Adaptive Risk Reduction (ARR) based on the differences between present and future impacts, calculating the percent reduction of the future impacts required to have the same burden of heat-related mortality as the present period.

Southern Europe will have the largest increase in heat-related morality in the 2050s due to higher temperatures, with smaller increases in the rest of Europe. Total population numbers and demographic change affected regional differences. Country-level projections are shown in Table S1 in the supplementary material.
On average, the population projections for the future yield a very minor negative ARR (less deaths than without additional adaption) of −0.2% for Europe as a whole in a scenario where no further climate change occurs (Table 1). These results were mainly driven by the projected population decrease in Eastern Europe, although other regions were projected to have an increased need for adaptation. For Eastern Europe, the impact was projected to decrease and the ARR was estimated to be −17.2% due to population change alone.
The projected ARR with climate change and demographic change suggests that additional adaptation will be needed in all parts of Europe to maintain current levels of heat-related mortality. RCP 8.5 shows a slightly larger range, with a small shift towards a higher estimated ARR. The differences between regions within each RCP was much larger than between RCPs.
The estimated ARR for the entire population of Europe was 47.0% (33.7% to 54.9%) and 53.4% (34.6% to 63.7%) for RCP 4.5 and RCP 8.5, respectively; the ranges only reflect the uncertainty in the climate change projections that were used (Table 1). This means that adaptation needs to be ramped up in Europe to lower heat-related vulnerability to present day levels. If this does not occur, then heat-related mortality would be expected to increase. For Europe on average, population change will have a minor effect on the results with an estimated ARR of 47.0% without population change and 46.8% with population change.
The results differ across regions (Table 1). The greatest need for reduction in vulnerability will be in Southern Europe, with estimated ARRs of 53.5% and 60.8% for RCP 4.5 and RCP 8.5 respectively. Adding population change, we estimated the ARRs to be 54.8% and 61.7%. For Eastern Europe, the region with the least need for adaptation, the estimated ARRs were 45.6% and 49.8% compared with 36.6% and 41.7% when population change was accounted for. The results also vary across the climate models. Under RCP 4.5, the estimates for Eastern Europe ranged from 18.0 to 44.1%, depending on what climate model was used.
Demographic change in Europe, with the greatest changes in the older age groups (Table 2), will increase the need for adaptation regardless of climate change. The estimated ARR for Europe was 38.9% for the part of the population above 65 years of age. Demographic change also will affect the estimated ARR differently in different regions. For Eastern Europe, the demographic shift to a more elderly population is quite marked and the ARR for total population, not taking climate change into account, was estimated to be negative. The estimated ARR for the group 65 years of age and older was 38%.
Overall, the estimated ARR for the elderly in a changed climate ranged from 64.1 to 74.7% for RCP 4.5 and 69.3 to 78.5% for RCP 8.5, in the different regions. The estimated ARR of 78.5% for the elderly population in Southern Europe means that future heat-related mortality must be reduced by adaptation to a fifth to be kept at current levels.

Countries in Europe are striving to lower the current health burden from heat by introducing heatwave early warnings systems, and revising health care plans to take ambient temperatures into account. Whichever climate scenario is followed, whichever population projection assumed, Europe will need to adapt to a greater degree to maintain heat-related mortality at present-day levels, which are themselves unacceptably high, posing an even greater challenge.

The following are available online at www.mdpi.com/1660-4601/14/7/741/s1, Table S1: Estimated Adaptive Risk Reduction (ARR) (%) needed for four European countries to maintain current levels of risk, comparing present and future populations (all ages and adults over 65 years of age), and present and projected climate in the 2050s under Representative Concentration Pathway (RCP) 4.5 and RCP 8.5.

Funding for this study came from the European research project ACCEPTED and the FP-7 ERA-ENVHEALTH program. 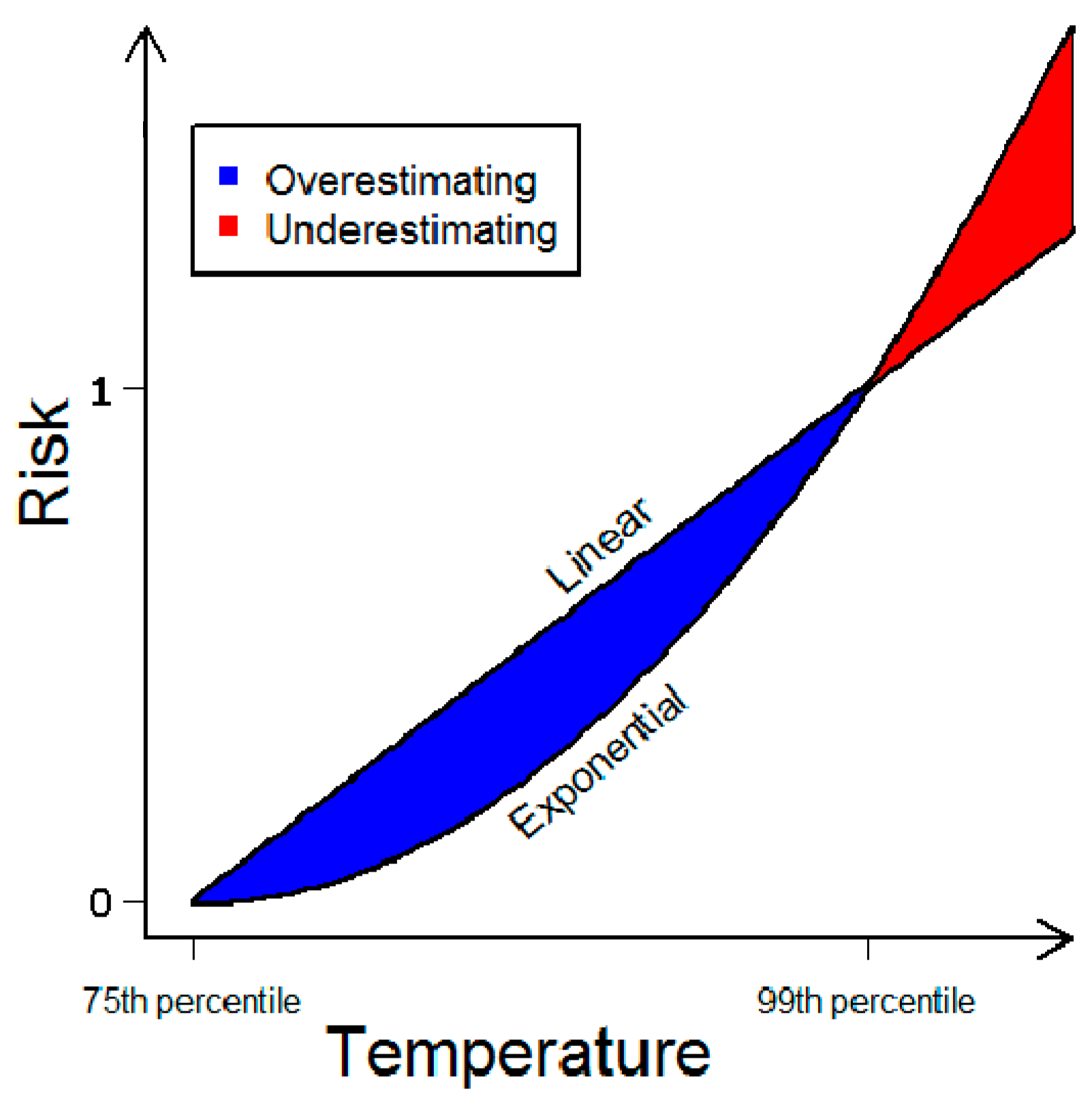