Within What Distance Does “Greenness” Best Predict Physical Health? A Systematic Review of Articles with GIS Buffer Analyses across the Lifespan
Next Article in Special Issue

Use of Vegetable Fibers for PRB to Remove Heavy Metals from Contaminated Aquifers—Comparisons among Cabuya Fibers, Broom Fibers and ZVI
Previous Article in Journal

The Fate of Pollutants in Porous Asphalt Pavements, Laboratory Experiments to Investigate Their Potential to Impact Environmental Health

Evaluation of Trace Element and Metal Accumulation and Edibility Risk Associated with Consumption of Labeo umbratus from the Vaal Dam, South Africa

With the occurrence of recreational and small scale subsistence fishing activities at the Vaal Dam, South Africa, consumption of fish from this dam may result in health risks associated with trace elements and metals. The Vaal Dam is one of the largest dams in South Africa, located between the Gauteng Province and Orange Free State, and supplies water to approximately 11.6 million people. A total of 38 specimens of the benthic cyprinid fish Labeo umbratus were collected from the Vaal Dam during two surveys, in 2011 and 2016. Samples of muscle, liver, kidney, gill and spinal cord were analysed, along with sediment samples collected during the same surveys. Thirteen trace elements were analysed in the samples by Inductively Coupled Plasma–Optical Emission Spectrometry, Inductively Coupled Plasma–Mass Spectrometry, Atomic Absorption Spectroscopy and Total Reflection X-ray Fluorescence spectroscopy. This is the first survey on trace element and Hg accumulation in this fish species from the Vaal Dam and target hazard quotients (THQ) indicated that there is a risk for consumers of fish for As and Hg (THQ = 1.43 and 1.14 respectively). Although levels of trace elements in this impoundment have shown little change for a number of years and are lower than global background levels, studies detailing the accumulation of metals by fish inhabiting the Vaal Dam have indicated that trace elements in muscle tissue are above food safety guidelines. Trace element levels in L. umbratus are lower compared to other species inhabiting the Vaal Dam and further indicate that risks for consumers can be decreased if humans relying on fish from the Vaal Dam preferentially consume this species over others. View Full-Text
Keywords: biomonitoring; edibility; Labeo umbratus; trace element accumulation; Vaal River; Mercury and Arsenic biomonitoring; edibility; Labeo umbratus; trace element accumulation; Vaal River; Mercury and Arsenic
►▼ Show Figures 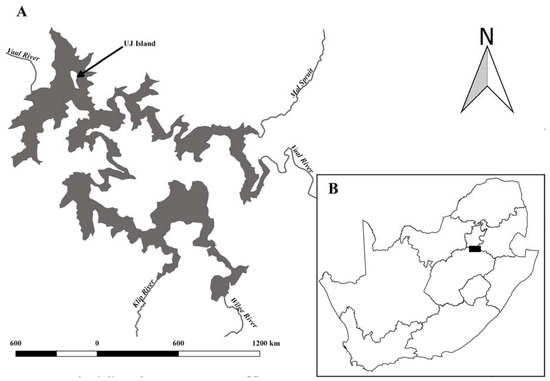