The Hopelchén municipality is located in the eastern part of the state of Campeche, close to the border with the state of Yucatan. Its geographical coordinates are 19°44′39″ N and 89°50′40″ W, with an area of 7460.27 km2. Hopelchén covers 13.1% of Campeche and is the most productive apicultural and agricultural municipality in the state (Figure 1). Groundwater, bottled drinking water, and urine from subsistence farmers were sampled from communities in the Chenes region, and the city of Campeche, an urban area used as a reference. This reference group consisted of male fishermen, not farmers (Figure 1). For a detailed description of the land use change in the area, we refer to the study by Ellis et al. [7].
From the five sites, 15 urine samples were collected from subsistence farmers at Ich-Ek (IE), Francisco J Mújica (F.J.M.), Suc-Tuc (SF-ST), San Juan Bautista Sahcabchén (SJB-S), and Crucero San Luis (CSL), and eight urine samples from fishermen at the City of Campeche, considered as a reference site (Ref) (Table 1).

Two types of groundwater samples were collected; one was from wells that are used as water sources in the surrounding towns and the other was from infiltration wells drilled to drain excess water from fields during the rainy season.
Two of the water samples collected from the wells used as water sources were from Ich Ek and Suc-Tuc, one was from Sahcabchén, one was from Cancabchén, and six were from Campeche, the reference site. These samples were taken directly from the pump outlet. The samples from Ich-Ek, Bolonchén, Pakchén, Xmaben, Sahcabchén, and Cancabchén were collected from open wells. These samples were extracted with a reusable polyethylene Bailer sampler (1.6″ × 36″).
To produce bottled drinking water in the region, groundwater is extracted and treated by reverse osmosis. This drinking water is sold in large refillable five-gallon water containers.
Groundwater and bottled drinking water samples were collected, transported, and stored in dark conditions at 4 °C in 200 mL amber colored glass bottles, completely cleaned with diluted HCl acid and washed with ultra-pure water [12]. In the laboratory, the samples were separated (1 mL) into sterile Eppendorf tubes and cooled in dark conditions at 4 °C, until their analysis. Because only two localities have water treatment plants in the area, four samples were collected from Ich-Ek, two from Bolonchén, and seven from the city of Hopelchén, and two samples from the city of Campeche were included in the analysis as a reference site.

Morning urine samples were collected to perform a cross section prospective study from subsistence farmers in five communities from the Hopelchén area. Urine samples were provided in 60 mL polystyrene containers with polyethylene screw caps. The participants labeled the containers according to the collection date and the containers were stored in coolers for further analysis [38]. All of the samples were provided by subsistence farmers who were adult men between 30 to 50 years of age, and had signed a written informed consent. The Research Committee at the Universidad Autónoma of Campeche approved the samples under project registration no. 095/UAC/2015, and the study was performed in accordance with the principles of the Declaration of Helsinki. The only inclusion criterion for the random sampling was that participants were subsistence farmers. Persons or groundwater samples not fulfilling the inclusion criterion had to be excluded with the exception of people from the reference group (fishermen). Urine samples were diluted with ultra-pure water (Barnstead Easypure, Barnstead/Thermolyne, Dubuque, IA, USA) at a ratio of 1:20. Fifty μL of urine and water samples were centrifuged at 10,000× g for 10 min at 20 °C and the supernatants were tested for glyphosate using Enzyme-Linked Immunosorbent Assay (ELISA) kits. Because the first urine samples were negative, researchers decided not to dilute the samples.

For the immunoanalytical detection of glyphosate, the ELISA method (PN 500086) by Abraxis LLC (Warminster, PA, USA) was employed by using a microplate reader (Multiskan Spectrum, Thermo Scientific, Waltham, MA, USA). Measurements were carried out according to the manufacturer’s instructions [39]. This method showed a detection limit (DL) of glyphosate in water of 0.05 μg/L, a quantification limit of (QL) of 0.13 μg/L, a maximum detectable concentration of 4 μg/L, and a mean recovery rate of 102 %. For quantification, a four-point calibration curve was constructed with two replicates with a blank measured as zero for comparison (0.00, 0.075, 0.2, 0.75, and 4 μg/L). An analytical quality control solution was used with 0.75 μg/L of glyphosate provided with the Abraxis Glyphosate Plate Assay kit. According to the analytical results of Byer at al. [40], they found an R2 value of 0.88, which indicates a close relationship between Liquid Chromatography/Tandem Mass Spectrometry (LC/MS/MS) and ELISA; however, the authors mention that ELISA tends to overestimate the concentration of glyphosate present. This overestimation could be explained by the presence of matrix interferences such as cross-reactive related analogues, organic matter, salts, or phosphates, or both. Conversely, Clegg et al. [41] and Rubio el al. [42] reported that the Abraxis glyphosate immunoassay has shown no reactivity to other substances such as some ions and humic acids. Nonetheless, a study conducted by Krüger et al. [43] validated the immunoassay with Gas Chromatography-Mass Spectroscopy (GC-MS) obtaining a correlation coefficient of 0.96 between the two tests. Mörtl et al. [44] quantified the levels of glyphosate in surface and groundwater in Hungary using the Abraxis kit. Their results showed high concentrations of glyphosate (almost 1 μg/L). High concentrations of this herbicide were attributed to agricultural activities, natural precipitation, and to a greater extent, catchment area characteristics, resulting in a variation of glyphosate leaching or run-off to surface waters. The literature also concludes that this method presents great advantages such as simplicity and specificity (cross-reactivity is below 0.1% for related compounds). Matrix effects were also observed only in tap water, possibly due to chlorination or heavy metal ions, or both, e.g., copper and zinc. For a better comparison of the results, the analytical detection or quantification limits, or both, measured in the concentrations were expressed as 1 ppb = 1 μg/L.

Almost all bottled drinking water samples in this study exceeded the acceptable limits of glyphosate for human consumption in the European Union (0.1 μg/L) [65]. It is important to note that in Mexico, there are no specific acceptable limits for glyphosate in drinking water; however, the Mexican Standard NOM-201-SSA1-2015 [66] states that non-halogenated organic compounds, including glyphosate, should not exceed 10 μg/L. In this case, none of the samples exceeded the maximum permitted level of the NOM-201-SSA1-2015.

Urine is an important elimination route for glyphosate. Thus, it is not surprising that certain amounts can be detected in human urine samples, especially if glyphosate is absorbed through direct exposure from agricultural practices, in the diet, or in drinking water [33].
In the present study, the mean glyphosate concentrations in urine samples for people living and working inside the agricultural areas of Francisco J. Mújica (F.J.M.) were higher than those that lived in the city of Campeche (0.47 μg/L and 0.22 μg/L, respectively). These results were higher than those reported in first world countries such as Switzerland (0.16 μg/L). The results obtained in our study were lower than other studies from both the United States and Europe (1.33 μg/L–1.82 μg/L), respectively [29,34,35].
The differences found in our results from those reported in other studies, likely reflect the differences between glyphosate use in agricultural fields and crop plantations with genetically modified seeds in other countries, such as maize and cotton, as well as the frequent use of this herbicide. The differences also likely reflect the frequency with which this herbicide is applied. Niemann et al. [35] and Kruger et al. [34], suggested that a trend towards the increase of glyphosate concentrations in urine samples in the European population probably reflects more frequent use of glyphosate in agricultural practices. Other studies have documented that glyphosate causes an ecological risk to aquatic ecosystems [54,67,68], and can be bio-accumulated in aquatic organisms, thus placing human health at risk for those who consume these products [66,69,70].

This is the first report regarding the presence of glyphosate in water and urine samples in subsistence farmers inhabiting different agricultural communities in the State of Campeche, Mexico. The concentrations and glyphosate ratios in the matrices evaluated indicate a high exposure to this pesticide. It is very important to conduct a more detailed follow-up study to understand the presence of glyphosate in bottled drinking water, correlated with the glyphosate concentrations in subsistence farmers that used this herbicide, since there is no evidence using this matrix. This is of concern because it could explain another possible route of exposure to this pesticide. The presence of glyphosate in urine is very important even at low concentrations because glyphosate puts human health at risk. Therefore, the potential ecological impact of this pesticide must be considered on a more global, rather than regional, scale.
The results indicate the need to establish a monitoring program for pesticide residues in the Yucatán Peninsula. They also suggest a need to monitor non-target organisms, such as bees, to establish the effect of the predominant agricultural practices currently occurring in Hopelchén.
Also relevant to humans, it is essential to carry out a study that considers the health status of the human population in Hopelchén because glyphosate is among the dozens of widely used pesticides in the industrialized agricultural area. Due to the large cultivation areas and the quantities of pesticides applied, exposure to these chemicals by the population and field workers in the area should be evaluated to avoid diseases associated with these compounds.

We thank the local communities for their valuab’le contributions to the accomplishment of this work by agreeing to bring water samples to us, and to the farmers for providing their urine samples. The authors wish to acknowledge Xavier Moya from the United Nations Development Program (UNDP) for generously providing us with the kits for glyphosate determination, and to Erick Javier Pech Poot and Irma Gómez for their valuable work with different communities and for urine sampling. Many thanks to Leydi Pech from the MA OGM Colectivo for maintaining her courage so that this study and further studies can be carried out. Meagan Campbell revised the English. 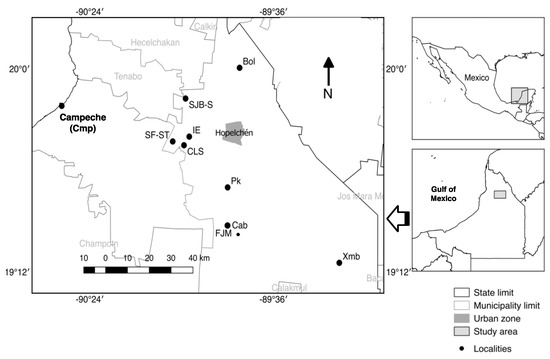 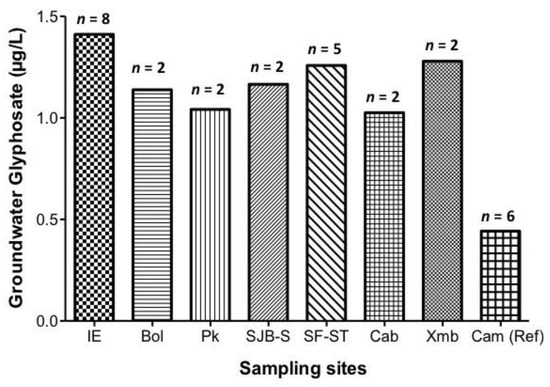 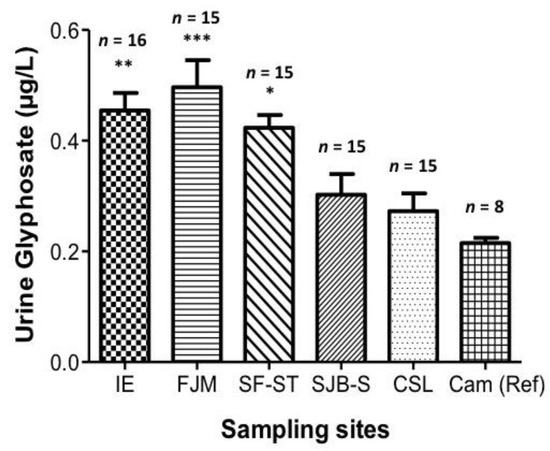 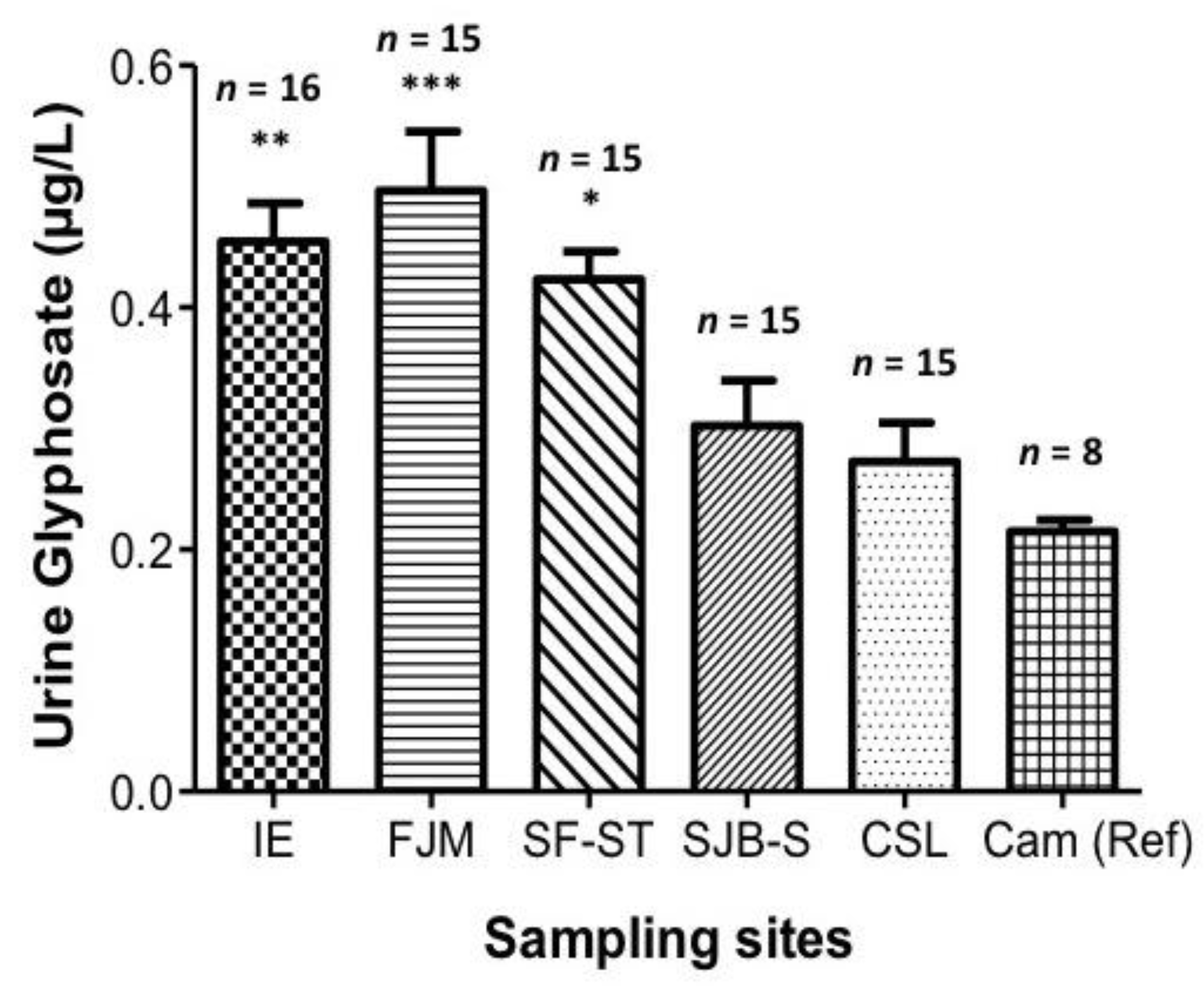