Changes in Prevalence and Socioeconomic Factors of Psychiatric Disability among Children in China from 1987–2006: A Population Based Survey
Next Article in Special Issue

Accurate assessments of exposure to nitrate in drinking water is a crucial part of epidemiological studies investigating long-term adverse human health effects. However, since drinking water nitrate measurements are usually collected for regulatory purposes, assumptions on (1) the intra-distribution system variability and (2) short-term (seasonal) concentration variability have to be made. We assess concentration variability in the distribution system of nitrate, nitrite, and ammonium, and seasonal variability in all Danish public waterworks from 2007 to 2016. Nitrate concentrations at the exit of the waterworks are highly correlated with nitrate concentrations within the distribution net or at the consumers’ taps, while nitrite and ammonium concentrations are generally lower within the net compared with the exit of the waterworks due to nitrification. However, nitrification of nitrite and ammonium in the distribution systems only results in a relatively small increase in nitrate concentrations. No seasonal variation for nitrate, nitrite, or ammonium was observed. We conclude that nitrate measurements taken at the exit of the waterworks are suitable to calculate exposures for all consumers connected to that waterworks and that sampling frequencies in the national monitoring programme are sufficient to describe temporal variations in longitudinal studies.
Keywords: nitrate; nitrite; ammonium; nitrification; drinking water; exposure assessment; Denmark nitrate; nitrite; ammonium; nitrification; drinking water; exposure assessment; Denmark

We retrieved drinking water quality measurements for all Danish public waterworks for nitrate, nitrite, and ammonium/ammonia from the publicly accessible national geodatabase Jupiter on 20 December 2016. Samples were taken between 1 January 2007 and 7 December 2016. Samples were coded on their sampling location, either at exit waterworks, or within the distribution system or at the consumers’ taps. Samples were analysed by certified laboratories using standard methods before being uploaded to Jupiter.
Table 1 summarizes the resulting dataset. Waterworks have a well-defined sampling tap just before the produced drinking water is pumped into the distribution net, here called “exit waterworks”. The majority of samples were taken at this tap at the exit of the waterworks. Samples taken within the distribution net (“net”) and at the consumers’ taps (“tap”) were combined for further analyses. Figure 1 shows the locations schematic. The final dataset included nitrate, nitrite, and ammonium measurements from 2948 individual public waterworks, covering all of Denmark, see Figure 2.
Figure 3 shows the cumulative fraction of the varying detection limits for (a) nitrate and (b) nitrite and ammonium. We imputed half the value of the detection limit for measurements below the detection limit. As shown in Table 1, a substantial fraction of samples were below the detection limit, in particular for nitrite (65%) and ammonium (44%). We therefore conducted sensitivity analyses by excluding all measurements below the detection limit.
To assess the variability within drinking water supply systems, we matched samples taken within the distribution net or at the consumers’ taps with the closest taken sample at the exit of the respective waterworks. We only included matched sample-pairs, if the samples were taken within a maximum time difference of 30 days.
Outliers were analysed and removed, when it could be established that large differences between concentrations at exit waterworks and within the system were due to connection/closure of boreholes (nitrate: four outliers, nitrite: seven outliers, ammonium: three outliers). We used linear regression to assess the association between concentrations at exit waterworks and within the distribution network or at the consumers’ taps. To assess the seasonal variability, we created box and whisker plots of the respective concentrations by calendar month. We used IPython [19] to retrieve data from Jupiter, R 3.3 [20] for data management and statistical computations, and R 3.3 and matplotlib [21] for creation of graphs.

3.1. Variability within the Distribution System

Drinking water nitrate levels measured from samples taken at the exit of the waterworks, within the distribution net, or at the consumers’ taps are representative of the nitrate levels within the whole system. The typically much higher number of samples taken at the waterworks for monitoring purposes can be used to estimate concentrations at the consumers’ taps. Nitrate concentrations do not vary seasonally, thus also single nitrate samples represent longer periods. Therefore, regulatory databases, such as the Danish national geodatase Jupiter, are suitable for nitrate exposure estimations in epidemiological studies; particularly in settings similar to the Danish drinking water infrastructure fully depending on groundwater without disinfection.
Nitrite and ammonium exposures are less often estimated in epidemiological studies. In Danish drinking water, levels are low. Generally, concentrations of both nitrite and ammonium are lower in the distribution net than at the exit of the waterworks. We attribute this to nitrification processes in the distribution net. However, the resulting changes in nitrate levels are not notably influenced by this nitrification, since the main source of nitrate in drinking water is groundwater and not in-system redox processes.

This research was conducted within the research alliance dNmark (www.dnmark.org), funded by the Innovation Fund Denmark. 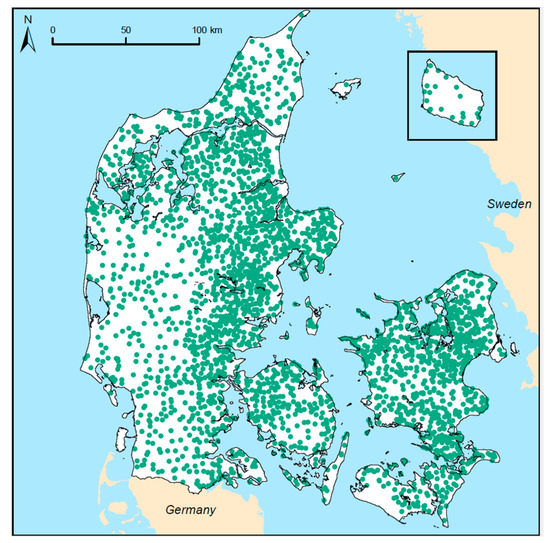 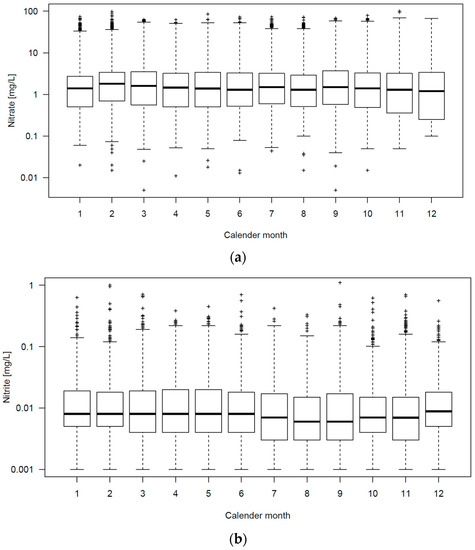 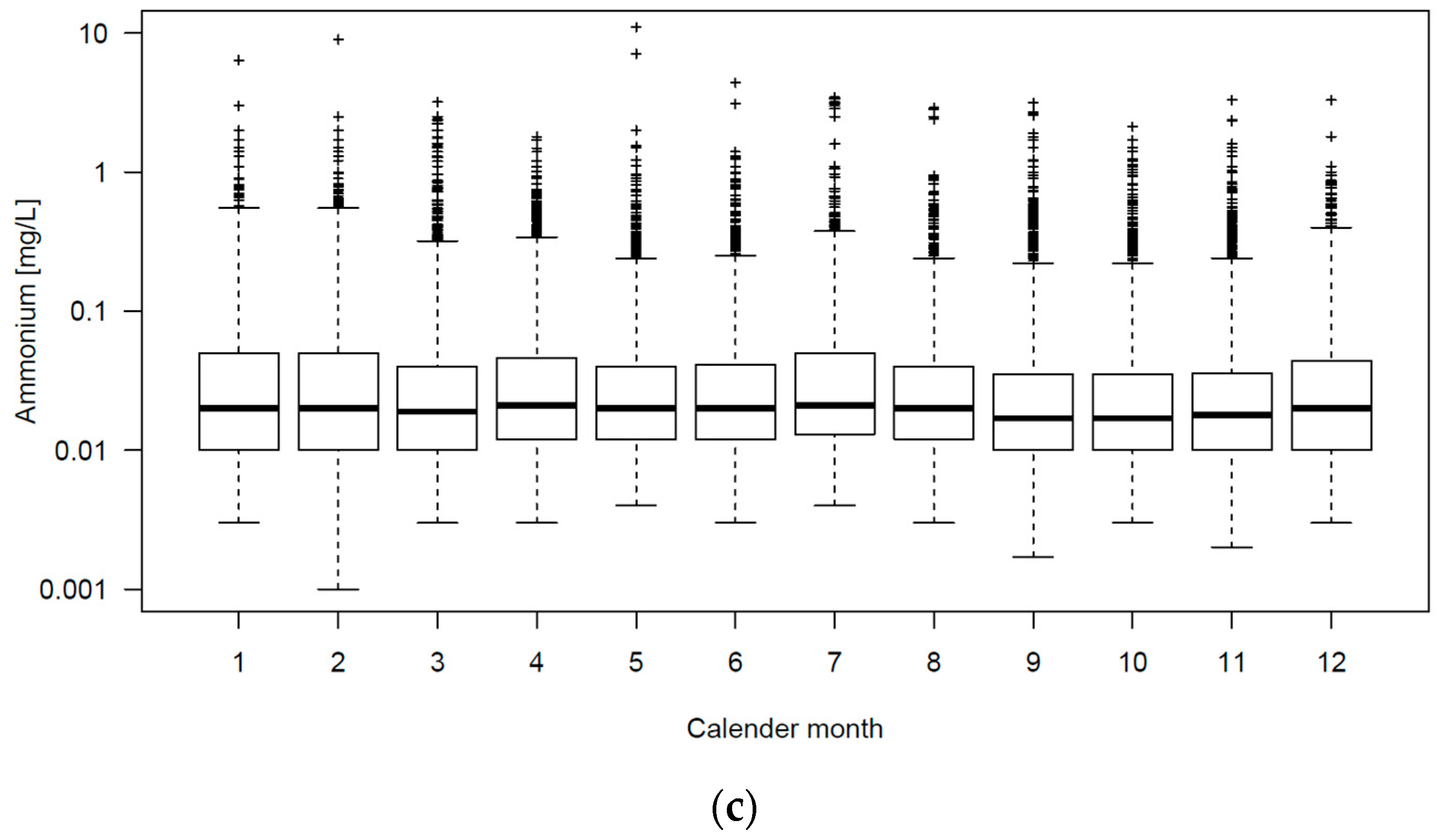 Table 1. Nitrate, nitrite, and ammonium measurements taken in public water supply systems between 2007 and 2016 by sampling location and percentage of samples below detection limit (<LOD).

Table 2. Linear regression coefficients and 95% confidence intervals of nitrate and nitrite concentrations at exit waterworks versus within distribution system and consumers’ taps.