An electrostatic-barrier-forming window (EBW) was devised to capture airborne pollen, which can cause allergic pollinosis. The EBW consisted of three layers of insulated conductor wires (ICWs) and two voltage generators that supplied negative charges to the two outer ICW layers and a positive charge to the middle ICW layer. The ICWs generated an attractive force that captured pollen of the Japanese cedar, Cryptomeria japonica, from air blown through the EBW. The attractive force was directly proportional to the applied voltage. At ≥3.5 kV, the EBW exerted sufficient force to capture all pollen carried at an air flow of 3 m/s, and pollen-free air passed through the EBW. The findings demonstrated that the electrostatic barrier that formed inside the EBW was very effective at capturing airborne pollen; thus, it could allow a home to remain pollen-free and healthy despite continuous pollen exposure. View Full-Text
Keywords: Cryptomeria japonica; electric field; pollen capture Cryptomeria japonica; electric field; pollen capture
►▼ Show Figures 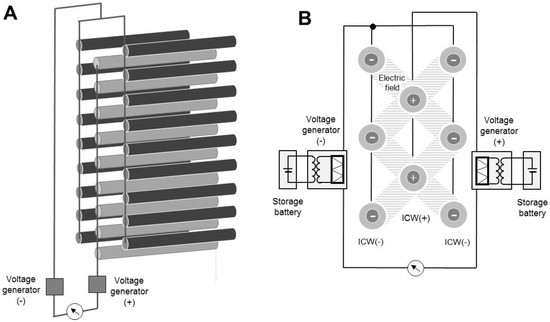