Active Use of Parks in Flanders (Belgium): An Exploratory Observational Study
Previous Article in Journal

Gold Mining in Ecuador: A Cross-Sectional Assessment of Mercury in Urine and Medical Symptoms in Miners from Portovelo/Zaruma

Epidemiologic Features of Enterovirus 71-Associated Hand-Foot-and-Mouth Disease from 2009 to 2013 in Zhejiang, China

Enterovirus 71 (EV71) usually causes hand-foot-and-mouth disease (HFMD) with severe clinical symptoms and even deaths in China. There is no efficient antiviral drug to protect against severe EV71-associated HFMD, making the development of EV71 vaccines therefore a priority. However, the potential target subject population(s) to be immunized with EV71 vaccine are not well understood. In this study, we characterized the epidemiology regarding EV71-associated HFMD on the basis of provincial-level surveillance. We extracted data on EV71-associated HFMD from the National Notifiable Disease Reporting System in Zhejiang Province, China between 1 January 2009 and 31 December 2013 (n = 7650). The higher incidence rate of EV71 cases occurred in those children aged 12–23 months, with boys being predominant. Interestingly, different peaks activities of EV71 infection was observed in different calendar year, with one peak in 2009 and 2013 and two peaks in 2010–2012. However, EV71 infection seemed to predominately occur in warm season and a distinguished cyclic peak that seemed to be of about 12 months. Children aged 12–23 months are thus identified as an important target population for public health intervention, for example, it is recommended that these key subjects immunized with EV71 vaccine. In addition, an enhanced surveillance system for EV71-associated with HFMD needs to focus on generic and phylogenetic analysis. View Full-Text
Keywords: enterovirus 71; hand-foot-and-mouth disease; epidemiology; surveillance enterovirus 71; hand-foot-and-mouth disease; epidemiology; surveillance
►▼ Show Figures 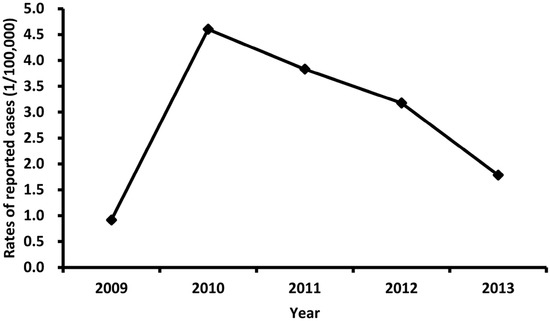