Economic Burden of Hospitalizations for Heat-Related Illnesses in the United States, 2001–2010
Previous Article in Journal

We systematically review public health adaptation to climate change by national governments in ten OECD countries using publicly available information in government documents and websites. Conceptually and methodologically, we seek to track and assess adaptation in a comparable, consistent, comprehensive and coherent manner—the ‘4Cs’ of adaptation tracking [18,59]. This provides the basis not only for characterizing the current state of health adaptation reporting, but also for monitoring, evaluating, and communicating adaptation over time [18,60].

We included national governments as our comparable unit of analysis, selected based on OECD membership and on having official languages in either English or French (opportunistic sampling based on the languages spoken by the research team): Australia, Belgium, Canada, France, Ireland, Luxembourg, New Zealand, Switzerland, the United Kingdom (UK) and the United States (US). In the UK, responsibility for adapting to climate change has been devolved to national authorities in Scotland, Wales and Northern Ireland [61]. We included any reported adaptation initiatives that were implemented across the entire UK or in England, since Her Majesty’s Government is responsible for adaptation initiatives at both levels, consistent with other studies [23]. Limiting our sampling to these ten countries sacrifices the potential comprehensiveness of sampling all countries and the ability to make broader inferences; however, this smaller sample allows us to examine each country’s context in more depth and conduct a qualitative assessment of adaptation, while still providing sufficient data to make inferences for similar OECD countries [18].

To consistently and systematically locate health adaptation initiatives in national policy documents, national adaptation plans, and government websites, in March 2015 we conducted systematic web searches and assessment of self-reporting, combining two approaches used in other adaptation tracking studies [24,28,57,62,63]. We developed search strings tailored for Google web searches in English and French (see Table S1 of Supplementary Materials). We reviewed the first 30 search results, then examined further results until we had reached 30 consecutive irrelevant results, consistent with other adaptation tracking studies [28,30]. We then conducted reference tracking of the reviewed documents, reviewed each country’s NC6, and hand-searched each country’s equivalent of Ministry of Health, Ministry of Environment, and climate change commission(s) (where applicable). These methods combine Lesnikowski et al.’s approach of reviewing countries’ NC6 for data on adaptation, and Panic and Ford’s systematic web search method and review of adaptation planning documents [24,30]. These methods and use of multiple data sources allowed for triangulation and the development of a comprehensive dataset, while maintaining a systematic approach to data collection [18,24,64].
We conducted content analysis to both qualitatively and quantitatively review the health adaptation initiatives reported in the government documents and webpages retrieved in the systematic web search. Content analysis is a commonly used research method in the social sciences, one form of which allows the researcher to review secondary sources and count the frequency of a phenomena, in this case public health adaptation initiatives [65,66]. Adaptation initiatives from webpages and documents were only included if explicitly described as adaptation to climate change and referred to as adaptation to protect human health. As such, initiatives such as infectious disease surveillance, which may already be designed for surveillance of changing and emerging infectious diseases, were excluded if not described as being an adaptation, despite potential contribution to increasing resilience or reducing vulnerability to climate change. Similarly, although adaptation initiatives in other sectors may indirectly also protect health, these were excluded if not explicitly intended to protect health for consistency in data collection and feasibility. These methods are consistent with other studies in this area [24,28,30,41,57,64,67,68] and reflect the challenge of evaluating and defining programs as adaptations unless self-identified as such [60]. See Table S2 of Supplementary Materials for document inclusion criteria.

For each initiative, we collected indicators aiming to coherently assess the quality of adaptation based on the Intergovernmental Panel on Climate Change (IPCC)’s Fifth Assessment Report [69] and academic literature [24,70], and going beyond simply documenting the number of initiatives [18]. Discrete health adaptation initiatives were documented in a detailed spreadsheet and coded according to the following measures adopted from other studies [24,70,71]: year, implementing body, adaptation type, health risk addressed, and consideration of vulnerable groups. Adaptation type is broken down through two different classifications. The first refers to either groundwork initiatives which build adaptive capacity, prepare the conditions for adaptation, or enable adaptation actions; or adaptation actions which indicate action has actually been taken to reduce population’s health vulnerability or increase resilience [24]. The second adaptation typology classifies adaptation initiatives by capacity building, management planning and policy, practice and behaviour, information, and warning or observing systems (Table 1) [70].

Identifying data for comparison of adaptation across countries remains a significant challenge for tracking adaptation across nations [18,19]. Data on adaptation are difficult to find, and thus we must rely on the reporting of adaptation as the best option currently available for systematic analysis [19,64]. Reporting of adaptation in itself is one of several important proxies for prioritisation of adaptation and adaptive capacity [28,57,64]. In this research we are searching for adaptation activities that are framed by the responsible authority as adaptation to climate change. Limited reporting may hinder sharing of experiences and best practices, learning, transparency, and effective monitoring and evaluation [19,28,72,73]. Accordingly, in this paper we are comparing reporting of actions, rather than comparing actions per se, consistent with work assessing policy progress for other health issues [74,75].

National government adaptation initiatives were, averaging across countries, 62% groundwork and 38% adaptation actions (Figure 2). The exceptions are France, Belgium and Luxembourg, which report planning or implementing >50% adaptation actions each. Meanwhile, most countries reporting >10 initiatives are planning or implementing some combination of all five adaptation types (Figure 3). In Canada and the UK, capacity building initiatives dominate, and are predominantly guidebooks, frameworks or toolkits, while in the US these initiatives are a combination of training and professional education, guidebooks, frameworks or toolkits, and dissemination. France and Belgium report implementing or planning the highest number of practice and behaviour initiatives, including initiatives to adapt the techniques used in building health facilities (France) and eradicate the Aedes japonicus mosquito vector (Belgium). See Table 1 and Table S4 of Supplementary Materials for further examples of each adaptation type. Countries of contrasting administrative structure (federal and decentralized, or unitary and centralized) (Table 2) report similar adaptation approaches. The UK and the US, for example, report similar groundwork vs. adaptation initiatives (Figure 2) despite greater centralization in the UK. Likewise, Belgium and France show similarity in adaptation types being planned or implemented (Figure 1), despite contrasting administrative structures. Indeed, some of the sampled countries with federal, decentralized administrative structures are taking central roles in coordinating adaptation across jurisdictional levels, such as Belgium and Switzerland, through legislation and coordinated adaptation planning.

3.3. The Role of Inter-Sectoral Adaptation Planning Varies across Countries

We find national governments are taking a variety of roles in public health adaptation in practice, though the variation in approaches does not simply follow the federal, decentralized/unitary, centralized divide. Among the sampled federal countries for example, the Swiss and Belgian national governments have both primarily taken central coordinating roles in adaptation, employing legislative policy instruments to formalize vertical coordination with the cantons and regions, respectively [83,90,91,92]. The Swiss government has also prioritized capacity building for example through its health adaptation guidelines for Swiss municipalities [83,93], while the Belgian government has focused on planning or implementing national-level surveillance and programs (e.g., eradication of Aedes japonicus mosquito, infrastructure maintenance) [94]. Coordination is not prominently stressed, however, in the US’ or Canada’s health adaptation planning documents and webpages. The US has sought to put adaptation on the national policy agenda through recent executive orders requiring adaptation planning among national agencies [95], but has also emphasized resource provision and capacity building, most notably through the Building Resilience Against Climate Effects (BRACE) Framework and Climate-Ready States and Cities Initiative [96,97]. The Canadian national government’s approach has been to identify priority areas for action through extensive vulnerability assessments and research [98,99], and provide resources such as a series of extreme heat events guidelines [100,101,102], then allow sub-national governments and health officials to adopt adaptation initiatives as they see fit. Meanwhile, among the sampled unitary systems, the UK’s approach has prioritized cross-sectoral collaboration on adaptation, while also emphasizing capacity building and identifying priority areas for action [103]. The French national government has identified priority areas for health adaptation action, and conducted centrally-driven surveillance and adaptation of hospital infrastructure [104,105]. These varied approaches to national-level health adaptation, along with the types of adaptation initiatives being planned or implemented (see Section 3.2) suggest that though federal governments are taking a larger coordinating role, the federal/unitary divide does not fully explain the variation in national-level approaches to public health adaptation.

The authors would like to acknowledge funding from the Public Health Agency of Canada and the Canadian Institutes for Health Research (CIHR). The authors would also like to thank Malcolm Araos for helpful discussions and Julie Jones for her assistance in developing the search methodology. No financial disclosures were reported by the authors of this paper.

This project was originally developed on a contract with the Public Health Agency of Canada. 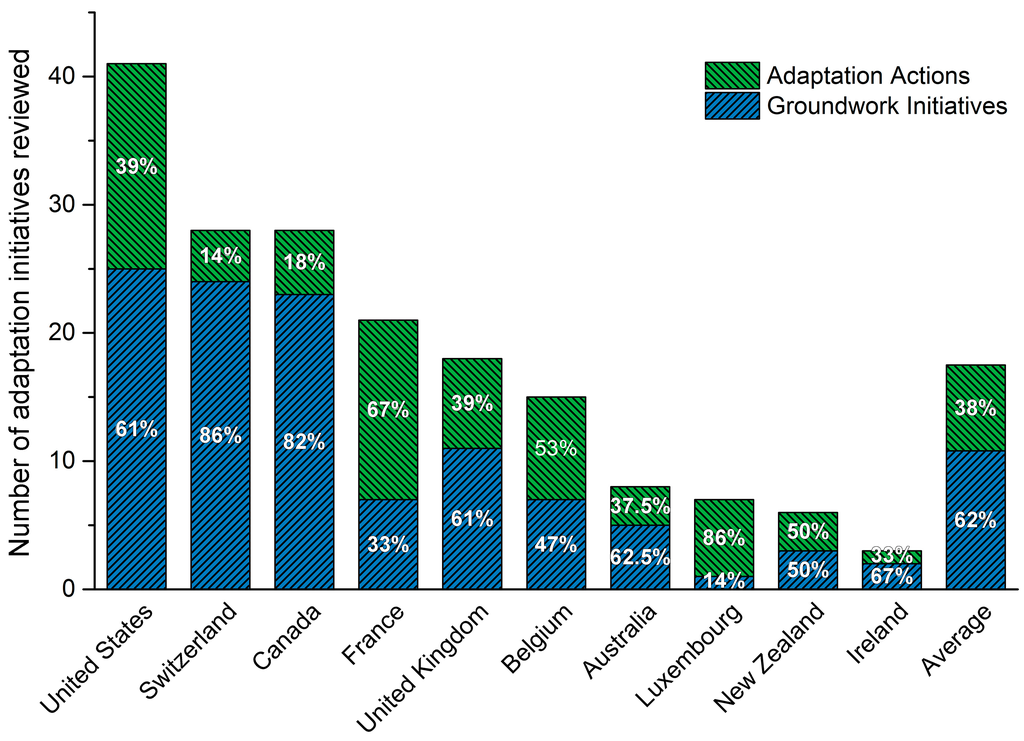 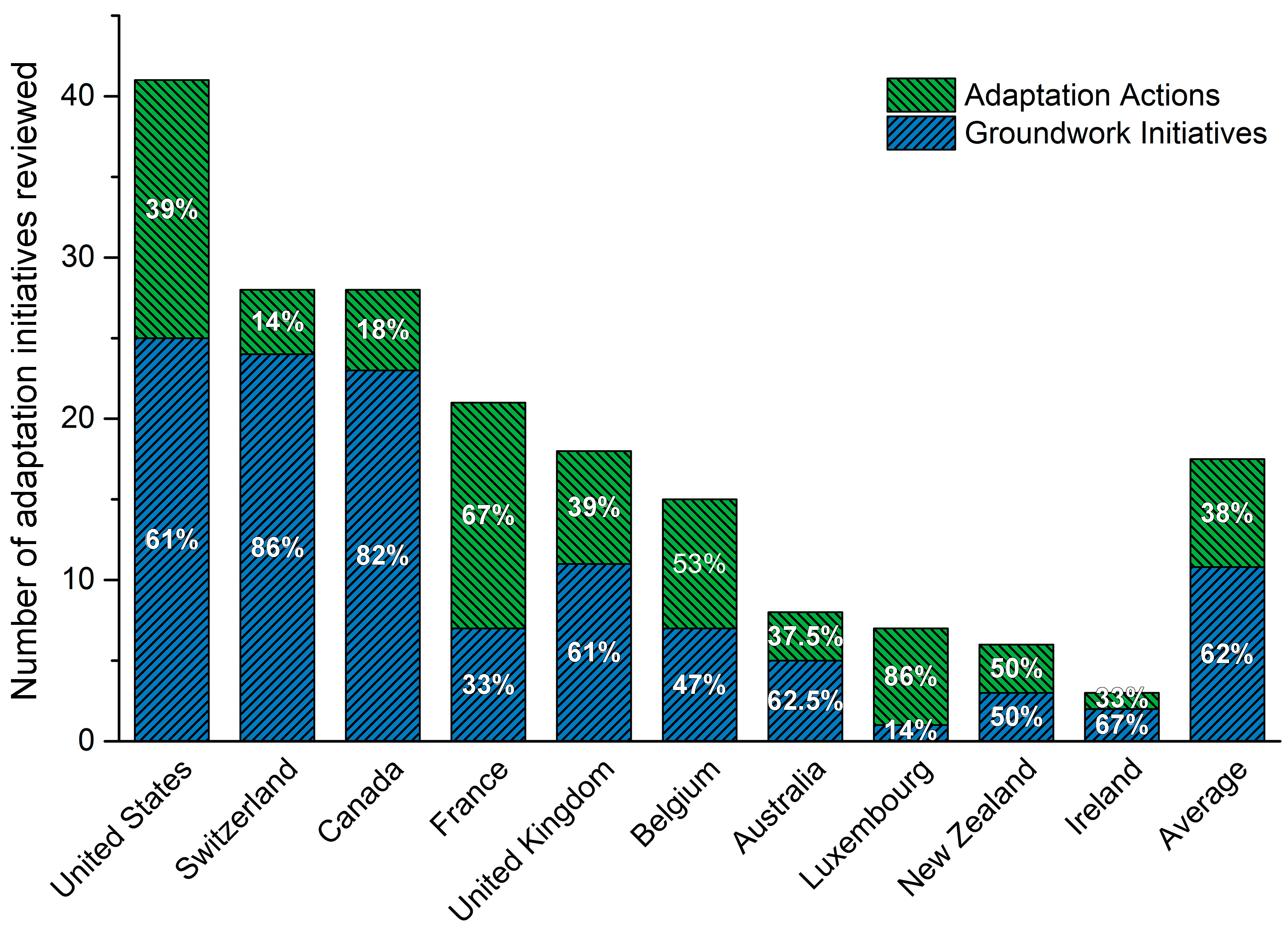 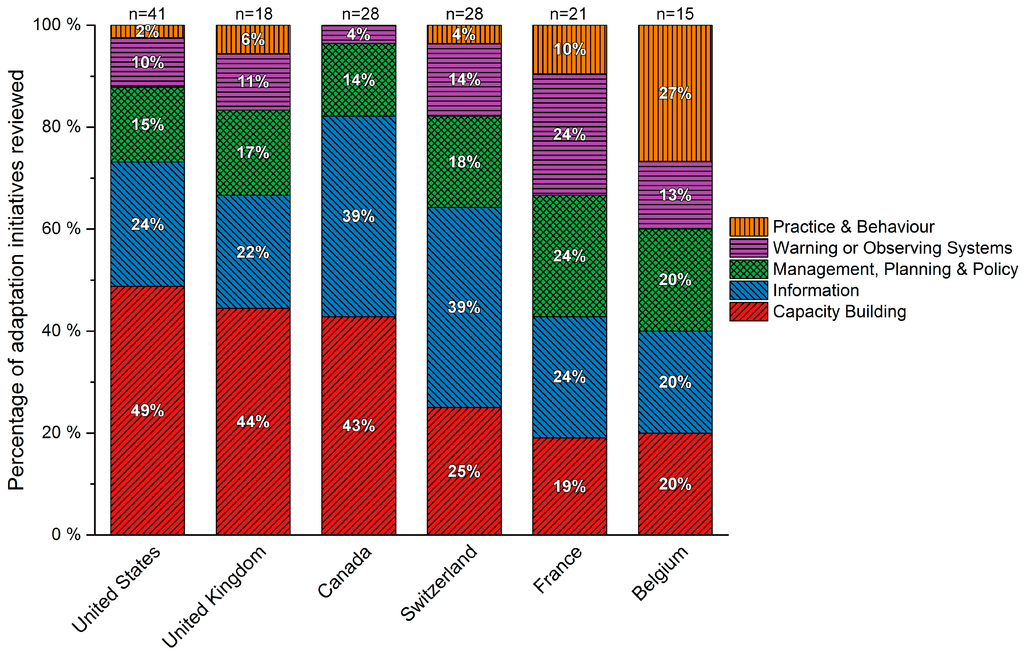