In order to acquire the pollution feature and regularities of distribution of metals in the topsoil within the sixth ring road in Beijing, a total of 46 soil samples were collected, and the concentrations of twelve elements (Nickel, Ni, Lithium, Li, Vanadium, V, Cobalt, Co, Barium, Ba, Strontium, Sr, Chrome, Cr, Molybdenum, Mo, Copper, Cu, Cadmium, Cd, Zinc, Zn, Lead, Pb) were analyzed. Geostatistics and multivariate statistics were conducted to identify spatial distribution characteristics and sources. In addition, the health risk of the analyzed heavy metals to humans (adult) was evaluated by an U.S. Environmental Protection Agency health risk assessment model. The results indicate that these metals have notable variation in spatial scale. The concentration of Cr was high in the west and low in the east, while that of Mo was high in the north and low in the south. High concentrations of Cu, Cd, Zn, and Pb were found in the central part of the city. The average enrichment degree of Cd is 5.94, reaching the standard of significant enrichment. The accumulation of Cr, Mo, Cu, Cd, Zn, and Pb is influenced by anthropogenic activity, including vehicle exhaustion, coal burning, and industrial processes. Health risk assessment shows that both non-carcinogenic and carcinogenic risks of selected heavy metals are within the safety standard and the rank of the carcinogenic risk of the four heavy metals is Cr > Co > Ni > Cd. View Full-Text
Keywords: urban topsoil; metals; spatial analysis; source analysis; health risk urban topsoil; metals; spatial analysis; source analysis; health risk
►▼ Show Figures 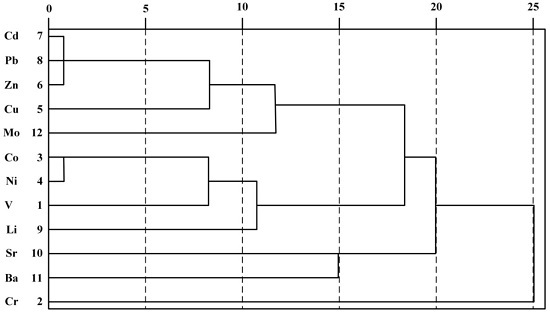