The Shantou Adolescent Mental Health Survey was a cross-sectional survey conducted in 2012 in Shantou, China. Three high schools, each representing a different type of school (city-level magnet school, provincial/regional-level magnet school, and technical school) were included in the study. Twenty six classes were randomly selected to participate in the survey, including eight 7th grade classes, nine 8th grade classes, and nine 9th grade classes. A total of 1727 students were invited to participate in the investigation, and 1661 students completed the entire questionnaire, resulting in a 96.2% response rate. All available students were fully informed of the purpose of the investigation and participated voluntarily. All participants and their parents or guardians approved of the study and voluntarily signed written consent letters, and this study was approved by the Ethics Committee of the Medical College of Shantou University (No. SUMC2012XM-0070).

The Center for Epidemiologic Studies Depression Scale (CESD)-10 was used as a depression screening scale [31]. The response options were in four categories ranging from ”rarely” (0) to ”all of the time” (3). Two items in the scale required reverse coding. All items were summed into a total score that ranged from 0 (no depressive symptoms) to 30 (severe depressive symptoms). According to Li’s criterion [31], we classified a CESD-10 score >8 as depression. In the present survey, the Cronbach’s alpha of the Chinese CESD-10 was 0.84.

The Pittsburgh Sleep Quality Index (PSQI) was used to assess Chinese adolescents’ sleep disturbance [32]. The PSQI evaluates sleep quality and disturbance over a 1-month period. Nineteen individual items generated seven component scores, which were summed to produce a global score with a range of 0 to 21. Higher scores represented poorer subjective sleep quality. In line with Xu’s standard [33], sleep disturbance was classified as a PSQI score >5. In the current study, the Cronbach’s alpha of the PSQI for the Chinese version was 0.83.

Duration of Internet Use

The Impact of Internet Use

The participants were also asked questions about the effect of their Internet use on their lives, including its effects on their health, school performance and family relationships. The response options for each question included “very negative”, “negative”, “no effect”, “positive” and “very positive”. A dichotomous variable indicating negative (i.e., “very negative” or “negative”) effects was created for each of the three domains.

The Internet Addiction Test (IAT) was used to determine the severity of Internet addiction [34]. The test contained 20 self-reported items each rated on a scale from 1 to 5, where a score of 1 was defined as “rarely” and 5 as “always”, and included how adolescent Internet behavior affected their daily lives, social intercourse, sleeping patterns and feelings. The total score for each participant could range from 20 to 100, and high scores indicated greater problems associated with Internet use. According to Lai’s criterion [34], a score of 20 to 49 indicated average Internet use, 50 to 79 represented problematic Internet use, and over 79 scores represented Internet dependence. In this study, we used a cut-off score of 50 to define the problematic Internet use. In this present survey, the Cronbach’s alpha for IAT was 0.90.

Other measures used in the study’s analyses included the student’s gender, school grade, annual household income, parents’ highest level of education, course scores and whether or not the child was living in an intact family.

Descriptive statistics were generated for the main variables examined in the study, including IAT, PSQI and CESD scores. A bivariate analysis was subsequently conducted, examining the relationships of problematic Internet use with sleep disturbance and depressive symptoms, as well as the associations between the demographic variables and each of the three key variables. Correlation analysis was used when both variables were continuous, a t-test was used when one variable was a dummy variable and the other was continuous, and ANOVA was used when one variable was categorical with more than two categories, and the other one was continuous. Path-analytic mediation analyses were utilized to determine the relationship between problematic Internet use, depression and sleeping disturbance in line with the method proposed by Baron and Kenny [35]. To establish mediation regression models, the following criteria had to be met:

We express our great appreciation to all of the participants in this study. 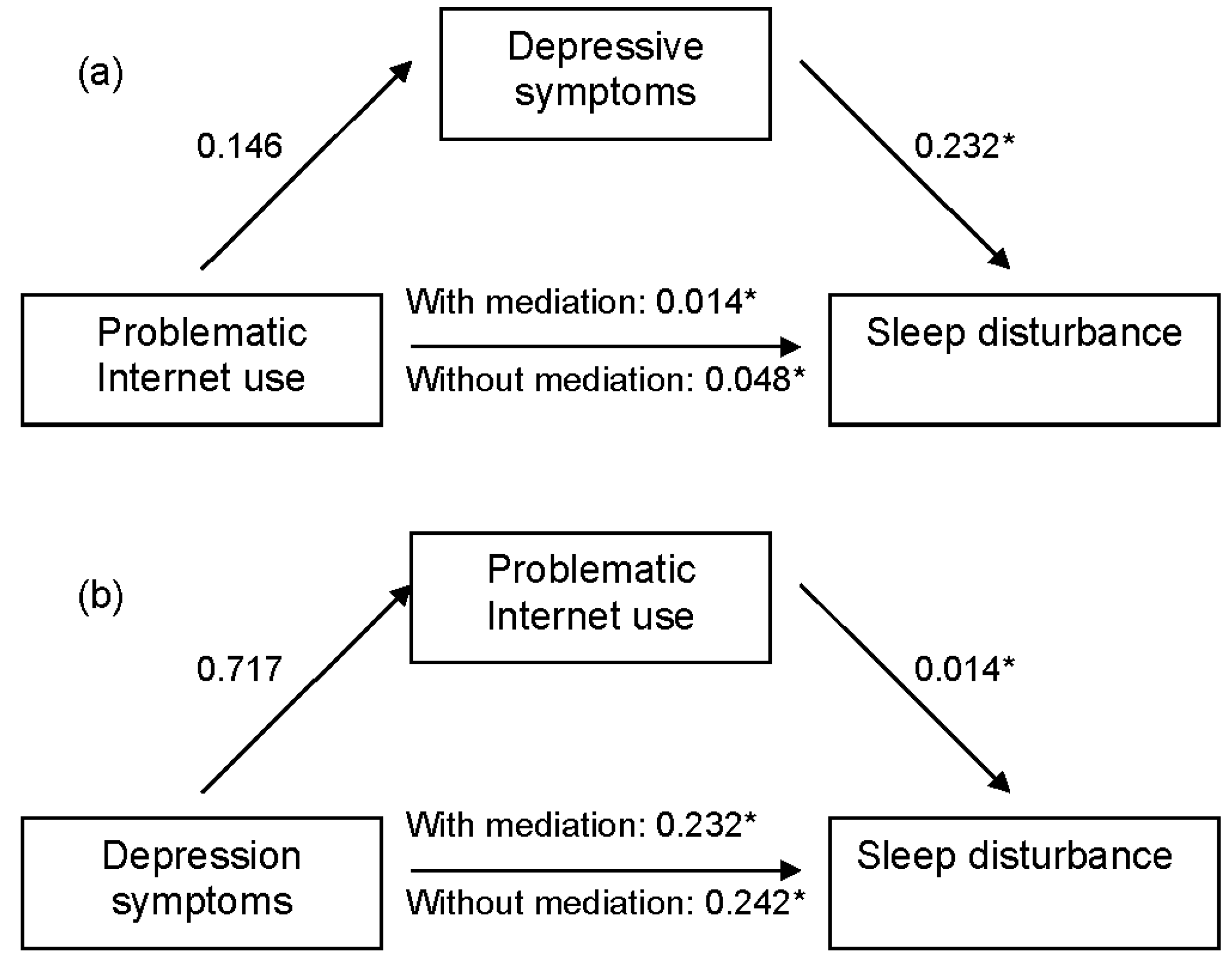