Determinants, Health Problems, and Food Insecurity in Urban Areas of the Largest City in Cape Verde
Previous Article in Journal

Transforming Life: A Broad View of the Developmental Origins of Health and Disease Concept from an Ecological Justice Perspective

The influential scientist Rene J. Dubos (1901–1982) conducted groundbreaking studies concerning early-life environmental exposures (e.g., diet, social interactions, commensal microbiota, housing conditions) and adult disease. However, Dubos looked beyond the scientific focus on disease, arguing that “mere survival is not enough”. He defined mental health as fulfilling human potential, and expressed concerns about urbanization occurring in tandem with disappearing access to natural environments (and elements found within them); thus modernity could interfere with health via “missing exposures”. With the advantage of emerging research involving green space, the microbiome, biodiversity and positive psychology, we discuss ecological justice in the dysbiosphere and the forces—financial inequity, voids in public policy, marketing and otherwise—that interfere with the fundamental rights of children to thrive in a healthy urban ecosystem and learn respect for the natural environment. We emphasize health within the developmental origins of health and disease (DOHaD) rubric and suggest that greater focus on positive exposures might uncover mechanisms of resiliency that contribute to maximizing human potential. We will entrain our perspective to socioeconomic disadvantage in developed nations and what we have described as “grey space”; this is a mental as much as a physical environment, a space that serves to insidiously reinforce unhealthy behavior, compromise positive psychological outlook and, ultimately, trans-generational health. It is a dwelling place that cannot be fixed with encephalobiotics or the drug-class known as psychobiotics. View Full-Text
Keywords: urbanization; socioeconomic; disadvantage; green space; environmental justice; depression; empathy; marketing; biodiversity; microbiota urbanization; socioeconomic; disadvantage; green space; environmental justice; depression; empathy; marketing; biodiversity; microbiota
►▼ Show Figures 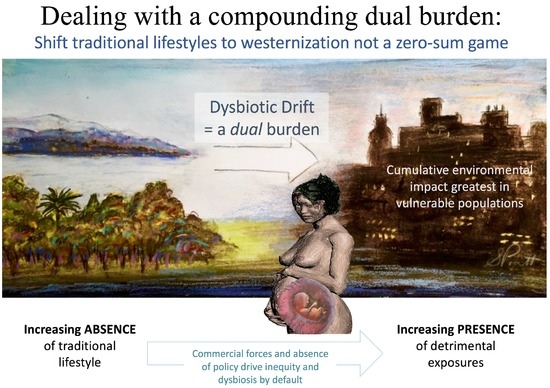 
Prescott, Susan L., and Alan C. Logan. 2016. "Transforming Life: A Broad View of the Developmental Origins of Health and Disease Concept from an Ecological Justice Perspective" International Journal of Environmental Research and Public Health 13, no. 11: 1075. https://doi.org/10.3390/ijerph13111075