Association between Suicide Ideation and Attempts and Being an Immigrant among Adolescents, and the Role of Socioeconomic Factors and School, Behavior, and Health-Related Difficulties
Next Article in Special Issue

The atmospheric boundary layer (ABL), an atmospheric region near the Earth’s surface, is affected by surface forcing and is important for studying air quality, climate, and weather forecasts. In this study, long-term urban nocturnal boundary layers (NBLs) were estimated by an elastic backscatter light detection and ranging (LiDAR) with various methods in Wuhan (30.5° N, 114.4° E), a city in Central China. This study aims to explore two ABL research topics: (1) the relationship between NBL height (NBLH) and near-surface parameters (e.g., sensible heat flux, temperature, wind speed, and relative humidity) to elucidate meteorological processes governing NBL variability; and (2) the influence of NBLH variations in surface particulate matter (PM) in Wuhan. We analyzed the nocturnal ABL-dilution/ABL-accumulation effect on surface particle concentration by using a typical case. A long-term analysis was then performed from 5 December 2012–17 June 2016. Results reveal that the seasonal averages of nocturnal (from 20:00 to 05:00 next day, Chinese standard time) NBLHs are 386 ± 161 m in spring, 473 ± 154 m in summer, 383 ± 137 m in autumn, and 309 ± 94 m in winter. The seasonal variations in NBLH, AOD, and PM2.5 display a deep (shallow) seasonal mean NBL, consistent with a small (larger) seasonal mean PM2.5 near the surface. Seasonal variability of NBLH is partly linearly correlated with sensible heat flux at the surface (R = 0.72). Linear regression analyses between NBLH and other parameters show the following: (1) the positive correlation (R = 0.68) between NBLH and surface temperature indicates high (low) NBLH corresponding to warm (cool) conditions; (2) the slight positive correlation (R = 0.52) between NBLH and surface relative humidity in Wuhan; and (3) the weak positive correlation (R = 0.38) between NBLH and wind speed inside the NBL may imply that the latter is not an important direct driver that governs the seasonal variability of NBLH. View Full-Text
Keywords: LiDAR; atmosphere; boundary layer; sensible heat flux; particle matter LiDAR; atmosphere; boundary layer; sensible heat flux; particle matter
►▼ Show Figures 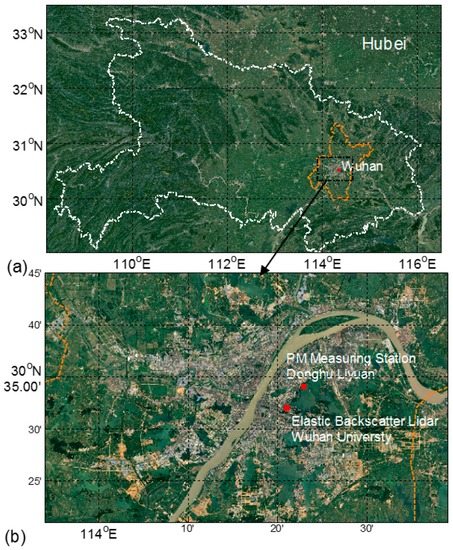