Parity, Age at First Birth, and Risk of Death from Non-Hodgkin’s Lymphoma: A Population-Based Cohort Study in Taiwan
Previous Article in Special Issue

David A. Groneberg
and

Background: Second hand smoke (ETS)-associated particulate matter (PM) contributes considerably to indoor air contamination and constitutes a health risk for passive smokers. Easy to measure, PM is a useful parameter to estimate the dosage of ETS that passive smokers are exposed to. Apart from its suitability as a surrogate parameter for ETS-exposure, PM itself affects human morbidity and mortality in a dose-dependent manner. We think that ETS-associated PM should be considered an independent hazard factor, separately from the many other known harmful compounds of ETS. We believe that brand-specific and tobacco-product-specific differences in the release of PM matter and that these differences are of public interest. Methods: To generate ETS of cigarettes and cigarillos as standardized and reproducible as possible, an automatic second hand smoke emitter (AETSE) was developed and placed in a glass chamber. L&M cigarettes (“without additives”, “red label”, “blue label”), L&M filtered cigarillos (“red”) and 3R4F standard research cigarettes (as reference) were smoked automatically according to a self-developed, standardized protocol until the tobacco product was smoked down to 8 mm distance from the tipping paper of the filter. Results: Mean concentration (Cmean) and area under the curve (AUC) in a plot of PM2.5 against time were measured, and compared. CmeanPM2.5 were found to be 518 μg/m3 for 3R4F cigarettes, 576 μg/m3 for L&M “without additives” (“red”), 448 μg/m3 for L&M “blue label”, 547 μg/m3 for L&M “red label”, and 755 μg/m3 for L&M filtered cigarillos (“red”). AUCPM2.5-values were 208,214 μg/m3·s for 3R4F reference cigarettes, 204,629 μg/m3·s for L&M “without additives” (“red”), 152,718 μg/m3·s for L&M “blue label”, 238,098 μg/m3·s for L&M “red label” and 796,909 μg/m3·s for L&M filtered cigarillos (“red”). Conclusion: Considering the large and significant differences in particulate matter emissions between cigarettes and cigarillos, we think that a favorable taxation of cigarillos is not justifiable.
Keywords: particulate matter; PM; tobacco smoke; cigarillos; ETS particulate matter; PM; tobacco smoke; cigarillos; ETS

The brand L&M is produced by the Philip Morris Company, based in New York, NY, USA. L&M cigarettes are globally available and quite popular in the USA, Latin America, Central and Northern Europe, the Arab World and the Far East and South Asia. In 2013, L&M was ranked the third best-selling international cigarette brand outside the United States and China, with a 2013 shipment volume of 95 billion units [1].
Philip Morris has expanded its range of products by offering cigarillos listed under the same name as the established cigarette brand L&M. In the European Union, these cigarillos are considerably cheaper than cigarettes of the same brand mainly due to a favorable taxation (e.g., one packet L&M cigarettes, containing 20 cigarettes “red label”, “blue label” or “red without additives” costs 5 EUR compared to 2.20 EUR for a packet of 17 L&M filtered cigarillos). This price edge will enable brand-loyal cigarette smokers to stick to their usual brand despite rising cigarette taxes. This allows them to continue exposing their fellow humans including children to ETS of one brand up to decades. Several studies have shown that especially low-income smokers switch to cheaper brands or reduce consumption when cigarette prices rise [2,3]. Inconsistent taxation will counteract this effect. In the present study, we want to investigate whether there are significant differences in the amounts of ETS-associated particulate matter that different types of L&M cigarettes and L&M cigarillos emit. We believe that against the background of inconsistent taxation, these differences would be of public interest.
According to the United States Environmental Protection Agency (EPA) that defines, regulates and categorizes particulate matter (PM) in the National Air Quality Standard for Particulate Matter [4], PM is the term for a mixture of microscopic solid and liquid matter suspended in the air. Its sources are natural (e.g., fires, volcanic eruptions, etc.) or human activities (e.g., tobacco smoke, traffic, industrial processes or use of fossil fuels). Particulate matter is categorized into different sizes of the particles. All particles with aerodynamic diameters smaller than 10 μm are inhalable and categorized as PM10. The fraction of PM10 with an aerodynamic diameter larger than 2.5 μm is called “inhalable coarse particles”. All particles with an aerodynamic diameter smaller than 2.5 μm are called PM2.5 or “fine particles”. The fraction of particles with aerodynamic diameters smaller than 1 μm is called PM1. PM2.5 includes PM1, and consequently PM10 includes PM1 and PM2.5. The smaller the particles are, the more deeply they can be inhaled. Particles of the PM1 fraction can reach the gas exchange regions of the lung and eventually penetrate the bloodstream. Surface area and solubility also determine PM’s toxicity as they limit the extend of gasses and vapors that can be absorbed (e.g., carcinogenic benzopyrenes) permitting their transport into distal lung areas [5].
Apart from its suitability as a surrogate parameter for ETS-exposure, both long-term and short-term exposure to PM affects human morbidity and mortality, independently of its origin. According to several studies, these PM effects occur in various ways and are dose-dependent [6,7,8,9,10,11,12,13,14,15]. Many of the harmful effects are probably caused by oxidative stress, inflammation and DNA-damage [16,17]. All health effects (e.g., carcinogenesis, cardiovascular diseases, etc.) can also be attributed to cigarillo consumption. Unfortunately, the level of knowledge about health effects attributed to cigarillo consumption appears to be low. Many cigarillo smokers consider cigarillo smoke less problematic than cigarette smoke as long as they do not directly inhale the mainstream smoke [18,19]. We think that ETS-associated PM ought to be considered an independent hazard factor, separately from nicotine, tar, and the many other known harmful compounds of ETS. Anti-smoking legislation cannot be enforced in a non-public environment. However, better information about brand-specific differences in ETS-associated PM could help raise a general awareness.

This study was performed according to the ToPIQ II study protocol [20]. Cigarettes and cigarillos were smoked in a 2.88 m3 glass chamber using an automatic second hand smoke emitter (AETSE, Schimpf-Ing Inc., Trondheim, Norway) (Figure 1A,B). PM2.5 levels were recorded, as well as temperature, air movement, and relative humidity within the chamber.

The 3R4F reference cigarette (Institute of Agriculture, University of Kentucky, USA) is made for scientific purposes only. Manufacturers’ information about 3R4F, L&M cigarettes and cigarillos are shown in Table 1. Tar, nicotine and CO amounts of L&M cigarillos are not published, as this has not been required by law. The sample size was 20 (n = 20) for each tested tobacco product (Figure 2).
L&M without additives (red), blue Label, red Label and filtered cigarillos (red) as well as standard research reference cigarette 3R4F were tested. The first six features are given on the package of the tobacco product. Further details were added from our own measurements. 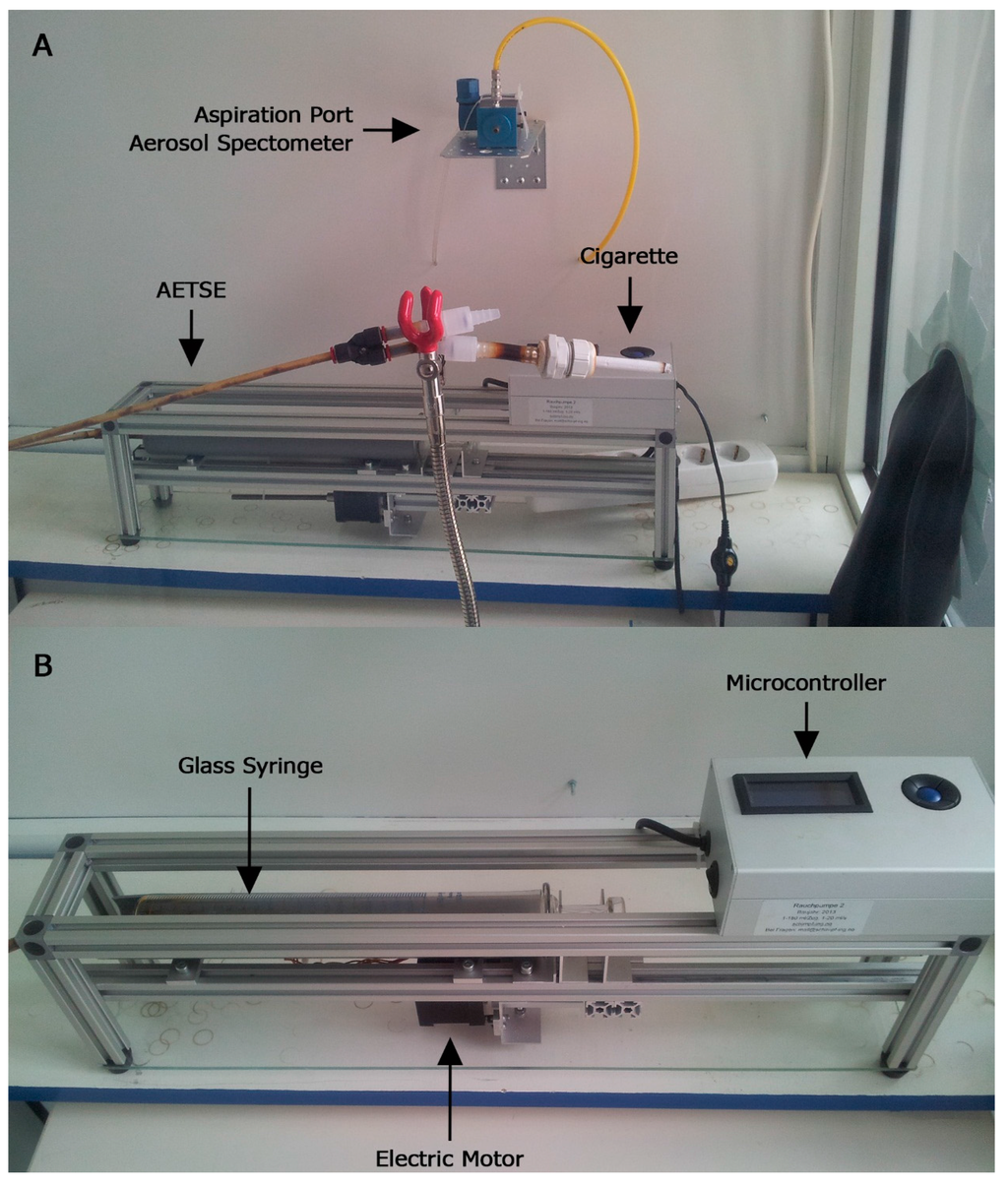 We describe the AETSE in the ToPIQ II study protocol [20]. The AETSE was developed and constructed according to our needs by the electrical engineering company Schimpf-Ing, Trondheim, Norway. Its purpose is to generate tobacco smoke in a standardized way as reliable and reproducible as possible. The AETSE consists of a 500 mL glass syringe and a linear-powered stepping motor, which imitates puffing by pulling and pushing the syringe plunger. The MS is sucked into the syringe and exhaled into the chamber Figure 1A, passing hoses and two check valves. The AETSE is triggered by a micro-controller. All parts are screwed together and fixed within a framework of aluminum profiles Figure 1B. Two rubber gloves, embedded into the side wall of the chamber, provide isolated access and enable the experimenter to ignite and extinguish the cigarettes and cigarillos without opening the door and being exposed to ETS (Figure 1A).

An aerosol spectrometer (Model 11.09 Grimm Co., Ainring, Germany) is used to quantify the concentration of PM2.5 using a special weighting function (particles < 0.5 μmm: 100%, particles = 2.5 μm: 50%, particles > 3.5 μm: 0%). For our ETS-experiments, we used the Grimm manufacturer’s factory calibration, which was not tested for tobacco smoke. The aerosol spectrometer operates with a volume-flow-rate of 1.2 L/min. (volume controlled) and a time resolution of 6 s. To protect the damageable metrology from the sticky condensates of the ETS, the sample air was diluted pre-analytically at a ratio of 1:10, using the VKL mini (Model 7.951, Grimm Co., Ainring, Germany) and neutral compressed air. The dilution system is fixed at the back panel inside the chamber at the height of 1.70 m. The sample air is subsequently sucked from inside the chamber through the back panel via a 15 cm suction hose to the intake socket of the aerosol spectrometer, which is placed on a board at the same height at the back panel outside the chamber. The laboratory rooms were air-conditioned and kept at a temperature of 22.5 ± 2 °C and a humidity of 29% ± 5% ensuring that daily variations of environmental PM concentration not influence our measurements. Nevertheless, background PM concentrations were documented before and after each measuring cycle by reading the baseline (Figure 3).

Figure 3 illustrates the sequences of our self- developed smoking protocol. Our aim was to generate tobacco smoke from cigarettes and cigarillos in a standardized way as realistic and as repeatable as possible. Unlike in the ToPIQ II study protocol, the smoking duration was not limited by 10 identical puffs. In order to take the different smoking durations of cigarettes and cigarillos into consideration, the tobacco product was extinguished as soon as it had burned down to a defined mark, which was set at a distance of 8 mm to the tipping paper Table 2. We consider 8 mm a realistic mean butt length. Puff duration was 3 s, puff volume 40 mL and inter-puff smoldering-interval 27 s. Measurement for statistical evaluation started with an initial double puff to support manual ignition of the tobacco product and ended with the extinction of the tobacco product in a water quench, when the defined mark was reached. Each measuring cycle finished with dust extraction using an industrial suction on the roof and in the back panel of the chamber.

The statistic program “Graph Pad Prism 5.03” was used for all statistical calculations and graphic representations. Cmean PM2.5 was measured in the timespan between ignition and extinction of each cigarette and cigarillo Figure 3 and the area under the curve (AUC) PM2.5 was calculated as integral in a plot of CmeanPM2.5 from ignition to extinction of the tobacco product against the time. This method is commonly known from toxico-pharmacological studies were it is usually used in plots of drugs in blood plasma against time. Twenty tobacco products of each type (n = 20) were examined and all types were compared against the 3R4F reference cigarette respectively, using the one sample t-test. The individual exposure parameters (CmeanPM2.5 and AUC PM2.5) of all tobacco products were tested for Gaussian distribution before performing the t-test. They proved to be normally distributed. Using the one-sample t-test, significant differences between two tobacco products (3R4F reference + brand cigarette or brand cigarillo) were assumed when p < 0.05 Figure 4 and Figure 5. Finally, Bonferroni’s correction was performed to counteract the problem of multiple comparisons.

ETS-associated particulate matter matters. Considering the relative measurement data, large differences in the emitted amounts of harmful PM can be demonstrated, when tobacco products are smoked in a standardized way. Both the tobacco brand and the kind of tobacco product have an effect on PM. We want to illuminate the impact of these differences on the burden of PM-exposure on passive smokers.

The authors declare no competing interests or funding by interest third parties.