Consumer products containing engineered nanoparticles (ENP) are already entering the marketplace. This leads, inter alia, to questions about the potential for release of ENP into the environment from commercial products. We have inventoried the prevalence of ENP-containing consumer products in the Singapore market by carrying out onsite assessments of products sold in all major chains of retail and cosmetic stores. We have assessed their usage patterns and estimated release factors and emission quantities to obtain a better understanding of the quantities of ENP that are released into which compartments of the aquatic environment in Singapore. Products investigated were assessed for their likelihood to contain ENP based on the declaration of ENP by producers, feature descriptions, and the information on particle size from the literature. Among the 1,432 products investigated, 138 were “confirmed” and 293 were “likely” to contain ENP. Product categories included sunscreens, cosmetics, health and fitness, automotive, food, home and garden, clothing and footwear, and eyeglass/lens coatings. Among the 27 different types of nanomaterials identified, SiO2 was predominant, followed by TiO2 and ZnO, Carbon Black, Ag, and Au. The amounts of ENP released into the aquatic system, which was estimated on the basis of typical product use, ENP concentration in the product, daily use quantity, release factor, and market share, were in the range of several hundred tons per year. As these quantities are likely to increase, it will be important to further study the fate of ENP that reach the aquatic environment in Singapore. View Full-Text
Keywords: nano-inventory; engineered nanoparticles (ENP); emission quantity; aquatic environment nano-inventory; engineered nanoparticles (ENP); emission quantity; aquatic environment
►▼ Show Figures 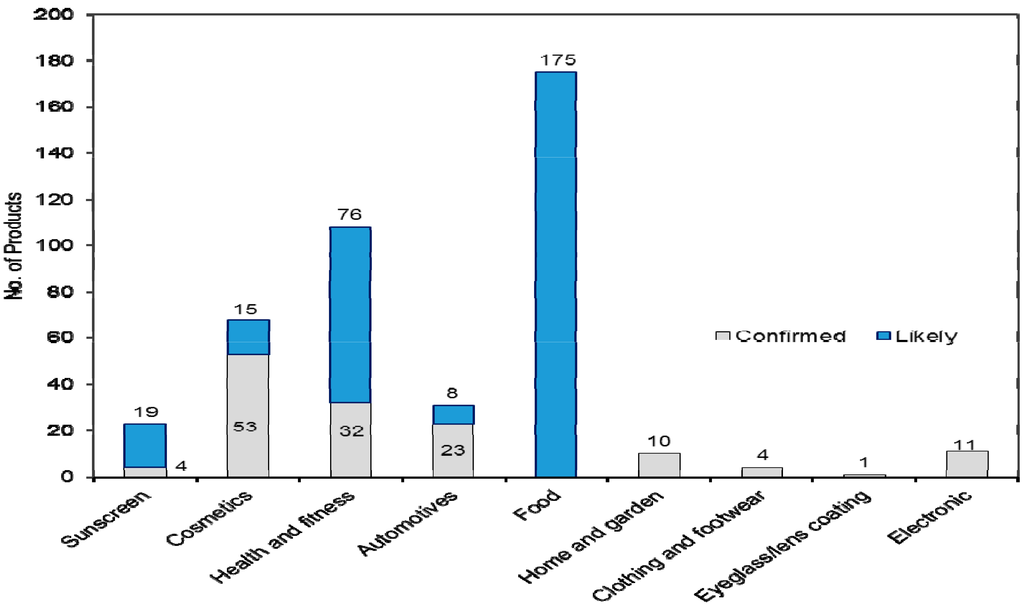