Environmental Pollution from Illegal Waste Disposal and Health Effects: A Review on the “Triangle of Death”

This study aimed to develop and validate a simple risk score for detecting individuals with impaired fasting glucose (IFG) among the Southern Chinese population. A sample of participants aged ≥20 years and without known diabetes from the 2006–2007 Guangzhou diabetes cross-sectional survey was used to develop separate risk scores for men and women. The participants completed a self-administered structured questionnaire and underwent simple clinical measurements. The risk scores were developed by multiple logistic regression analysis. External validation was performed based on three other studies: the 2007 Zhuhai rural population-based study, the 2008–2010 Guangzhou diabetes cross-sectional study and the 2007 Tibet population-based study. Performance of the scores was measured with the Hosmer-Lemeshow goodness-of-fit test and ROC c-statistic. Age, waist circumference, body mass index and family history of diabetes were included in the risk score for both men and women, with the additional factor of hypertension for men. The ROC c-statistic was 0.70 for both men and women in the derivation samples. Risk scores of ≥28 for men and ≥18 for women showed respective sensitivity, specificity, positive predictive value and negative predictive value of 56.6%, 71.7%, 13.0% and 96.0% for men and 68.7%, 60.2%, 11% and 96.0% for women in the derivation population. The scores performed comparably with the Zhuhai rural sample and the 2008–2010 Guangzhou urban samples but poorly in the Tibet sample. The performance of pre-existing USA, Shanghai, and Chengdu risk scores was poorer in our population than in their original study populations. The results suggest that the developed simple IFG risk scores can be generalized in Guangzhou city and nearby rural regions and may help primary health care workers to identify individuals with IFG in their practice. View Full-Text
Keywords: risk assessment; score; impaired fast glucose; Southern Chinese risk assessment; score; impaired fast glucose; Southern Chinese
►▼ Show Figures 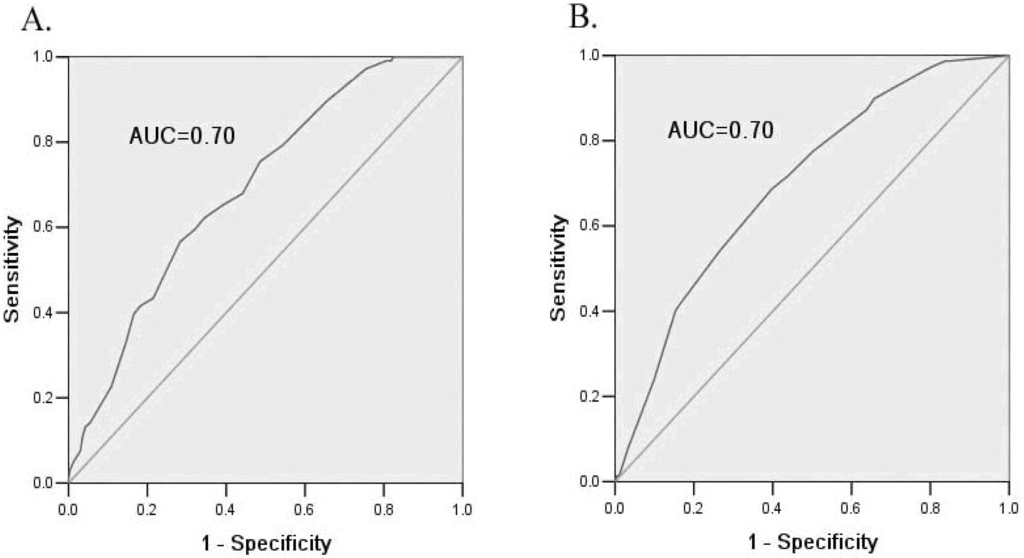