Association of PAEs with Precocious Puberty in Children: A Systematic Review and Meta-Analysis

:
Background: Precocious puberty (PP) currently affects 1 in 5000 children and is 10 times more common in girls. Existing studies have tried to detect an association between phathalic acid esters (PAEs) and PP, but the results did not reach a consensus. Objective: To estimate the association between PAEs and children with PP based on current evidence. Methods: Databases including PubMed (1978 to March 2015), OVID (1946 to March 2015), Web of Science (1970 to March 2015), EBSCO (1976 to March 2015), CNKI (1979 to March 2015), WANFANG DATA (1987 to March 2015), CBM (1978 to March 2015) and CQVIP (1989 to March 2015) were searched to identify all case-control studies that determined the exposure and concentration of PAEs and their metabolites in children with PP. Meta-analysis of the pooled standard mean difference (SMD) and odds ratio (OR) with 95% confidence intervals (CI) were calculated. Results: A total of 14 studies involving 2223 subjects were finally included. The pooled estimates showed that PP was associated with di-(2-ethylhexyl)-phthalate (DEHP) exposure (OR: 3.90, 95% CI: 2.77 to 5.49). Besides, the concentration of DEHP (SMD: 1.73, 95% CI: 0.54 to 2.91) and di-n-butyl phthalate (DBP) (SMD: 4.31, 95% CI: 2.67 to 5.95) in the PP group were significantly higher than those in the control group, respectively, while no difference was detected between case and control groups in either serum or urinary concentration of mono-(2-ethylhexyl)-phthalate (MEHP), monobutyl phthalate (MBP), mono(2-ethyl-5-oxohexyl) phthalate(MEOHP), mono-(2-ethyl-5-carboxypentyl) phthalate (MECPP), monomethyl phthalate (MMP), monobenzyl phthalate (MBzP) or monoethyl phthalate (MEP). Conclusions: Exposure of DEHP and DBP might be associated with PP risk for girls, however, there is no evidence to show an association between the exposure to most PAE metabolites and PP. Given the moderate strength of the results, well-designed cohort studies with large sample size should be performed in future.
Keywords:
phathalic acid esters; precocious puberty; systematic review; meta-analysis

Precocious puberty (PP) currently affects 1 in 5000 children and is 10 times more common in girls [1]. Previous studies [2] have reported that the overall PP incidence continues to increase and the puberty development age has shown an advancing trend since the 19th century. Advanced progression of secondary sex characteristics occurs in children with PP leading to compromised adult height, poor social adaptability and emotional disorders. Meanwhile, the risk of endocrine disease and even cancer can sharply increase for a child if hormones stay at an abnormal level for a long time [2,3]. The cause of precocious puberty may be associated with certain conditions such as infections, tumors, brain abnormalities, histiocytosis, radiation, injuries, or the exposure to environmental endocrine disruptors [2]. The phthalic acid esters (PAEs) are one of the classes of environmental endocrine disruptors (EEDs) involved in many endocrine diseases, and studies have argued that exposure to PAEs may be associated with PP [4]. Population studies have indicated that most children are exposed to PAEs. A German study collected the morning urine of 254 children aged 3–14 years from March 2001 to March 2002, and the average concentrations of the primary metabolite MEHP, and secondary metabolites 5 OH-MEHP, and 5 oxo-MEHP were 7.9, 52.1 and 39.9 μg/L, respectively, indicating that children were not free of PAE exposure [5]. The U.S. NHANES study from 1999 to 2000 found measurable concentrations of MEP, MBP, and MBzP in more than 97% of the 2540 urine samples tested, indication that exposure to PAEs is widespread in the United States [6]. Animal studies have confirmed that the mechanism of action of PAEs and their metabolites is to act as anti-androgens, but DBP also has comparatively strong estrogenic properties [7] which may lead to reproductive disruption [8] in females including reproductive maturation [9,10]. However, existing human studies don not seem to have achieved a consensus so far. Colon et al. [11] observed significantly higher levels of PAEs in 31 Puerto Rican girls with early thelarche compared to controls, which suggested a possible association between PAEs and premature thelarche, whereas, a study on U.S. girls reported phthalate levels in urine were not related with central precocious puberty of pre-pubescent girls [12]. Therefore, it is necessary to perform a systematic review and meta-analysis to synthesize current study evidence and identifying the association between PAEs and children with PP.

Inclusion criteria: only cohort studies and case-control studies that determine the exposure and concentrations of PAEs and their metabolites in children with PP including central precocious puberty (CPP), peripheral precocious puberty (PPP) and premature thelarche (PT) were identified. In our study, PP is defined as the appearance of secondary sex characteristics before the age of eight years in girls and nine years in boys, increased growth velocity, advanced bone maturation, pubertal LH response in a standard GnRH test (100 ug iv) [3,13].
Exclusion criteria: (1) any other disease that would affect endocrine levels such as McCune Albright syndrome, adrenal cortical tumors, hypothalamic hamartoma; (2) certain types of publication such as news items, letters, editorials, comments, reviews, conference summary or animal studies.

Two authors (Yi Wen, Yu-Shuang Ling) screened all the retrieved literature by title, abstract and full texts using criteria mentioned above. Cross-checking was conducted for accuracy. Disagreements were resolved through discussion or consultation with the third author (Qin Liu) to a consensus. The following data were extracted from included studies using a pre-designed extraction form: (1) general information, including authors, publication year, country; (2) study design; (3) participants characteristics and sample size; (4) outcomes, consist of the exposure and concentrations of different types of PAEs and their metabolites; (5) detection methods and instrument.

The Newcastle-Ottawa Scale (NOS) [14] was used to assess the methodology quality of included case-control studies. Assessment items included the selection of cases (four items, four scores), comparability of cases and controls (one item, two scores), and ascertainment of exposure to risks (three items, three scores). Research scored 0~3 was considered as low quality, scored 4~6 as moderate quality, while scored 7~9 as high quality, respectively [15]. The quality scores did not affect studies inclusion, but would be considered when performing sensitivity analysis and interpreting our research results.

Meta-analysis was performed using Review Manager Software (Version5.2, Cochrane Collaboration, London, UK) and Stata Software (Version12.0, StataCorp, College Station, TX, USA). The outcomes of continuous and dichotomous variables were assessed as standard mean difference (SMD) and odds ratio (OR) with 95% confidence intervals (CI), respectively. Results reported in median and range was converted to mean and standard deviation [16]. Heterogeneity among the results of the included studies was evaluated by χ2 and I2 statistic tests. Results were considered to be statistically significant when p < 0.05. Once effects were found to be heterogeneous (I2 > 50% or p < 0.05), the random effects model was used. Otherwise, the fixed effects model was used. Considering the different exposure levels of PAEs in different countries, subgroup analysis on different countries was conducted in conditions of plenty included studies. All the outcome analyses were sensitivity assessed using the leave-one-out approach for the stability of the result. Since the number of included trials was less than 10 in every outcome, we did not assess the publication bias [17].

3.3. Risk of Bias in Included Studies

Among 14 included studies, except for seven studies were considered as moderate risk of bias (scores of 5 and 6), the others were assessed as low risk of bias (scores of 7 and 8) (Table 2). All studies had adequate case and controls definition, and exposure assessment. No standard method was adopted in sampling, which would affect the representativeness of the cases. The controls were recruited from the same community as cases in only five studies. Seven just matched case and control by age without consideration of other confounding factors, while one article did not mention measure to control for confounding factors.
Table 1. Characteristics of studies included in the meta-analysis.
PT-premature thelarche; CPP-central precocious puberty; ICPP-idiopathic central precocious puberty; EP-early normal puberty. AL3000 (Agilent, California, CA, USA); HP-1100, Waters 1525, HPLC 1200 (Waters, Massachusetts, MA, USA); GC5890F (Shimadzu, Kyoto, Japan).
Table 2. The Newcastle-Ottawa Scale (NOS) for assessing the methodology quality.
a: Low-quality research, scored 0–3; moderate quality research, scored 4–6; high-quality research, scored 7–9. 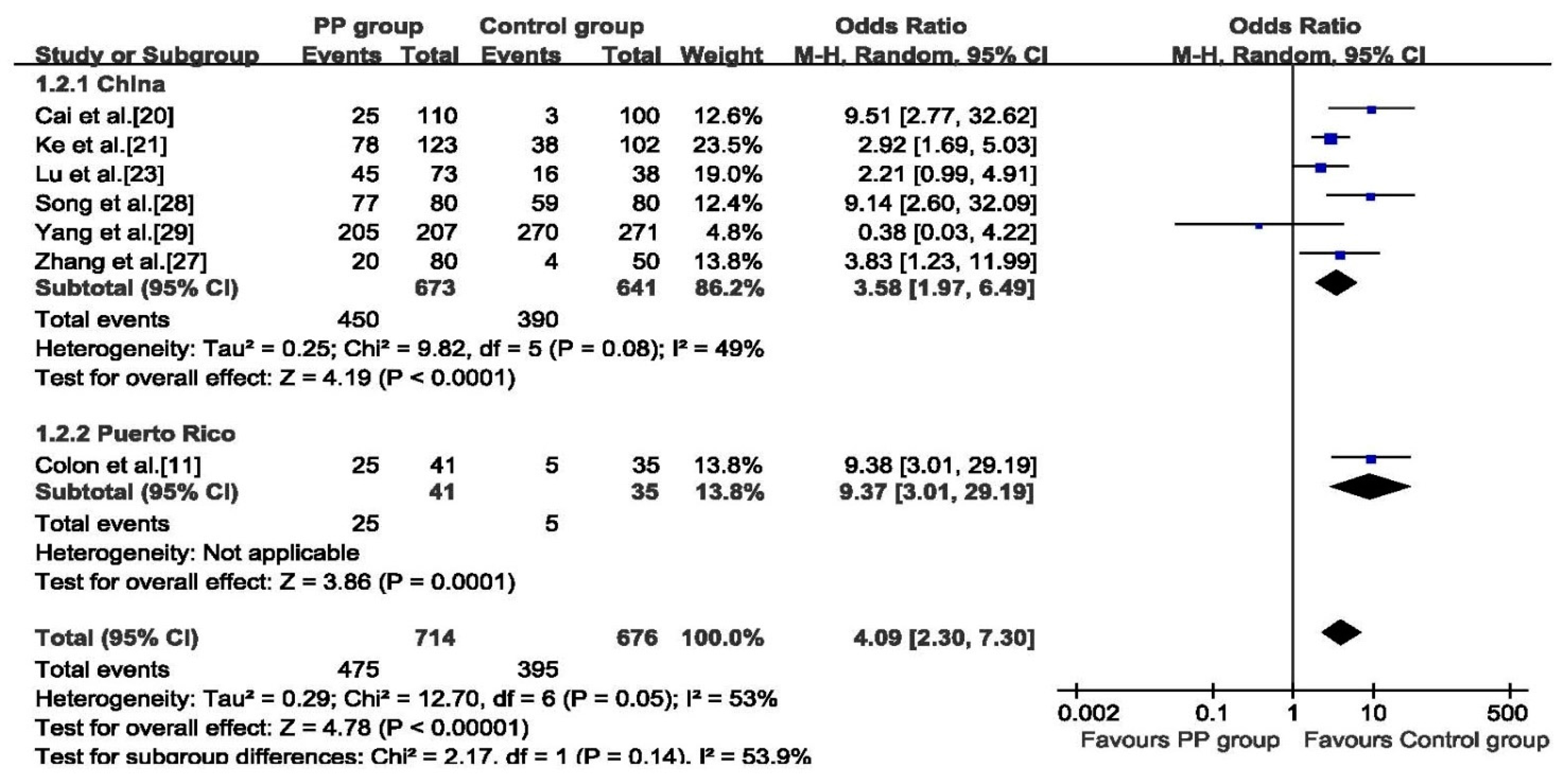 3.5. Serum Concentration Difference of PAEs and Their Metabolites between PP Group and Control Group

Three studies [12,19,29] reported the serum concentration of MBP. The pooled data showed no significant difference between the two groups (SMD: −0.01, 95%CI: −0.30 to 0.27, 774 girls), the random effects model was adopted because of heterogeneity among studies (p = 0.06, I2 = 65%), (Figure 7). No difference between the two groups was detected in sensitivity analysis of the MBP concentration (see Supplementary Material Figure S6).

To the best of our knowledge, the present work is the first attempt to determine the association between PAEs and PP by a systematic review and meta-analysis. From the combination results of individual studies, our findings suggested that a potential statistical association between phthalate exposure and PP, particularly, the exposure of DEHP and DBP might be a potential risk for girls with PP. No associations were identified between PP with MEHP, MBP, MEOHP, MECPP, MMP, MBzP or MEP. Nevertheless, it would be not appropriate to claim that those phthalate metabolites had no role in PP progress given the moderate strength of the present study. Well-designed epidemiological studies involving more types of PAEs with larger sample sizes are needed and measurement of phthalate metabolites is highly recommended for the examination of PAE exposure. Future studies should also employ methods to exclude potential contamination of samples during processing and analysis.

The research was supported by Basic and Frontier Research Project of Chongqing, Science and Technology Commission (Grant No. cstc2013jcyjA10001) and National Youth Science Fund Project (Grant No. 81502825).