Bacteria that Travel: The Quality of Aircraft Water

The travelling population is increasing globally year on year. International tourist arrival figures reached 1087 million in 2013 and 1133 million in 2014; of which 53% and 54% respectively accounted for air transport. The water on board aircraft is sourced from surface or ground water; piped to a central filling point and distributed to each aircraft by water service vehicles at the home base or at the destination airport. The purpose of this study was to ascertain the microbial, chemical (pH; Total and Free chlorine) and physical (temperature) quality of water from two aircraft, long- and short-haul, as well as from the original water source and the water service vehicle. A total of 154 water samples were collected and analysed. Long-haul flights were found to be significantly poorer in terms of microbial quality than short haul flights (p = 0.015). Furthermore, correlation and regression analysis showed that the water service vehicle was a significant source of increased microbial load in aircraft. Microbial diversity was also demonstrated, with 37 bacterial species identified belonging to eight classes: γ-Proteobacteria; β-Proteobacteria; α-Proteobacteria; Bacilli; Actinobacteria; Flavobacteria; Sphingobacteria and Cytophaga; using phenotypic and 16S rDNA sequence-based analysis. We present a novel quantified study of aircraft-related potable water supplies. View Full-Text
Keywords: aircraft; potable water; microbial contamination aircraft; potable water; microbial contamination
►▼ Show Figures 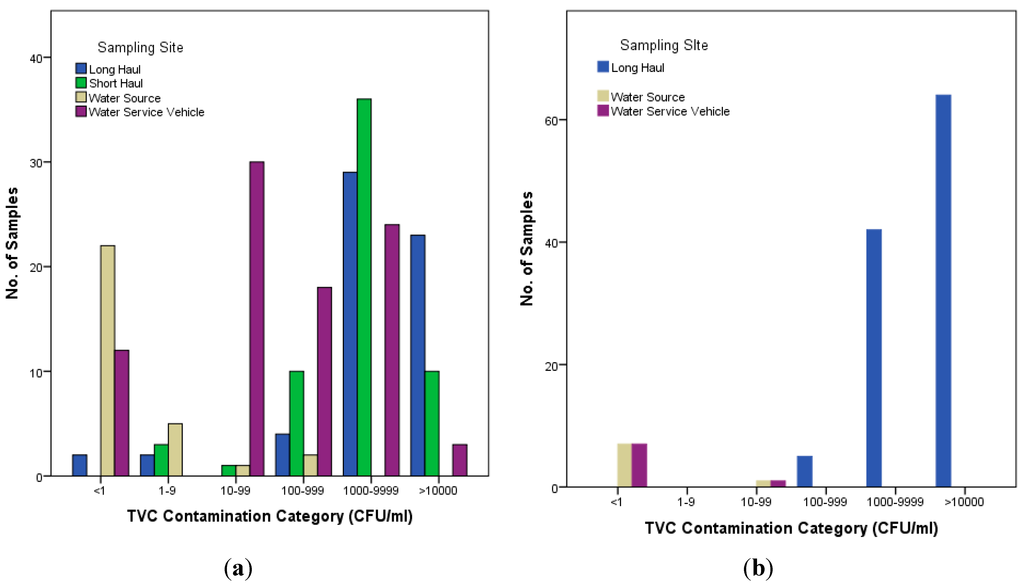