Characteristics, Perceived Side Effects and Benefits of Electronic Cigarette Use: A Worldwide Survey of More than 19,000 Consumers

Electronic cigarettes (e-cigs) are marketed as safer alternatives to tobacco cigarettes and have shown to reduce their consumption. Here we report for the first time the effects of e-cigs on subjective and objective asthma parameters as well as tolerability in asthmatic smokers who quit or reduced their tobacco consumption by switching to these products. We retrospectively reviewed changes in spirometry data, airway hyper-responsiveness (AHR), asthma exacerbations and subjective asthma control in smoking asthmatics who switched to regular e-cig use. Measurements were taken prior to switching (baseline) and at two consecutive visits (Follow-up/1 at 6 (±1) and Follow-up/2 at 12 (±2) months). Eighteen smoking asthmatics (10 single users, eight dual users) were identified. Overall there were significant improvements in spirometry data, asthma control and AHR. These positive outcomes were noted in single and dual users. Reduction in exacerbation rates was reported, but was not significant. No severe adverse events were noted. This small retrospective study indicates that regular use of e-cigs to substitute smoking is associated with objective and subjective improvements in asthma outcomes. Considering that e-cig use is reportedly less harmful than conventional smoking and can lead to reduced cigarette consumption with subsequent improvements in asthma outcomes, this study shows that e-cigs can be a valid option for asthmatic patients who cannot quit smoking by other methods.
Keywords: smoking cessation; electronic cigarette; asthma; lung function; methacholine challenge; harm reduction smoking cessation; electronic cigarette; asthma; lung function; methacholine challenge; harm reduction

Smoking prevalence in asthma is comparable to that found in the general population [1] and cigarette smoking is strongly predictive of the development of new-onset asthma in allergic adults [2]. It is increasingly recognized that the asthmatic smoker may represent a distinct disease phenotype with increased susceptibility of exacerbations and poor asthma-specific health status [3]. In fact it has been observed that a smoking history of more than 20 pack-years is associated with more severe disease [4]. Most studies report an accelerated decline in lung function and an increased severity of airflow obstruction in asthmatic smokers [5]. Moreover, asthma patients who smoke appear to have an impaired response to the beneficial effects of inhaled corticosteroids (ICS) or oral corticosteroids compared to asthmatics who do not smoke [6,7].
Of note, worsening asthma symptoms and lung function changes can be reversed with smoking cessation [8,9]. Unfortunately, there are only modest cessation rates reported in adult asthmatics [10] as there is a lack of awareness that smoking is a key aetiological component of their respiratory symptoms [11].
Electronic cigarettes (e-cigs) are battery-operated devices designed to vaporise nicotine without burning tobacco. These consumer products may be attractive to smokers who consider their tobacco use a recreational habit that they wish to maintain in a more benign form, rather than a predicament requiring medical treatment, and also to those smokers who cannot quit with current available medications due to their low efficacy. Indeed, e-cigs are increasingly being used as an alternative low risk substitute for conventional cigarettes [12,13].
Although these products have been shown to be effective and safe cigarette substitutes in randomized controlled trials of “healthy” smokers [14,15], no data is available regarding health effects of e-cigs use among vulnerable populations, including people with asthma. Moreover, it is unknown if regular “vaping” (the act of inhaling vapour from e-cigs/personal vaporizers) could result in improved asthma-related outcomes. Here we report, for the first time, changes in the level of asthma control, pulmonary function as well as airway hyperresponsiveness (AHR) in a group of asthmatic smokers who quit or reduced substantially their tobacco consumption by switching to e-cigs.

Medical records of patients with asthma regularly followed-up in our outpatient clinics were reviewed. From September 2012 to December 2013, a total of 18 asthmatic patients reporting regular use of e-cigs on at least two consecutive follow-up visits were identified. All patients had mild to moderate disease according to the Global Initiative for Asthma (GINA) criteria and treated accordingly with inhaled corticosteroids (ICS), long-acting (LABA) and on-demand short-acting β2 agonist (SABA) [16]. This study was approved by the local institutional ERB and informed consent was obtained from each patient.

We obtained patient data from the clinic visit immediately preceding [baseline visit] the first of the two consecutive follow-up visits (follow-up visits 1 and 2). We also included data from the clinic visit immediately prior to the baseline visit (pre-baseline visit) to validate disease stability. In brief, data from four visits were collected and analysed. Pre-baseline visits were carried out at 6–12 months prior to baseline visits. Follow-up visits 1 and 2 were carried out at 6 (±1) and 12 (±2) months after baseline visits, respectively. At each clinic visit, patients were reassessed using a standard protocol consisting of clinical examination, review of smoking history, re-evaluation of treatment adherence and efficacy. The latter was assessed using: (i) Juniper’s Asthma Control Questionnaire (ACQ) score [17]; (ii) by annotating the number of exacerbations from the previous follow up visit (an asthma exacerbation was defined as an increase in respiratory symptoms requiring a short course of oral or parenteral corticosteroids); (iii) spirometry with parameters of forced expiratory flow in 1 second (FEV1), forced vital capacity (FVC), expiratory ratio (%FEV1/FVC) and forced expiratory flow at the middle half of the FVC (FEF25-75%); and (iv) in some subjects bronchial provocation tests assessing Airway HyperResponsiveness (AHR) with methacholine were also conducted as previously described [18].

Baseline and demographic data were expressed as mean (±standard deviation (SD)) except for methacholine PC20 values expressed as geometric mean (data range). Post-initiation of e-cig data were similarly expressed. We also delineated data for single (e-cigs only) and dual users (e-cigs and conventional cigarettes). Statistical comparisons of parameters assessed were carried out using student’s T-test and Wilcoxon-signed rank test depending on whether the data was parametric or not, respectively. Missing measurements were not included in the analyses. A two-tailed p value of less than 0.05 was considered to indicate statistical significance. All analyses were performed with the Statistical Package for Social Science (SPSS for Windows version 18.0, IBM Inc., Chicago, IL, USA).

3.1. Characteristics of the Patients and of Their E-cig Use

Of the 18 e-cig users identified (11 male, seven females) all were former tobacco smokers of about 20 conventional cigarettes/day. There were 10 single and eight dual users by the time of their most recent follow-up visit (follow-up visit 2). All dual users smoked ≤5 conventional cigarettes/day. The pre-baseline and baseline visit patient demographics and characteristics are summarised on Table 1. All patients initially switched to a cigarette-like model, but the majority went on to adopt a personal vaporizer. Duration of regular e-cig use ranged from 10 to 14 months, with twelve patients using them for more than a year. All patients took a stable dose of ICS, LABA as well as on-demand SABA throughout the observation period. None of the patients included had ever received a significant modification in anti-asthma therapy from their pre-baseline visit. There were no significant differences in the measured parameters of lung function, bronchial hyperresponsiveness (BHR) or ACQ scores between the pre-baseline and baseline visits (except for a small change in FEF25-75%) (Table 1). 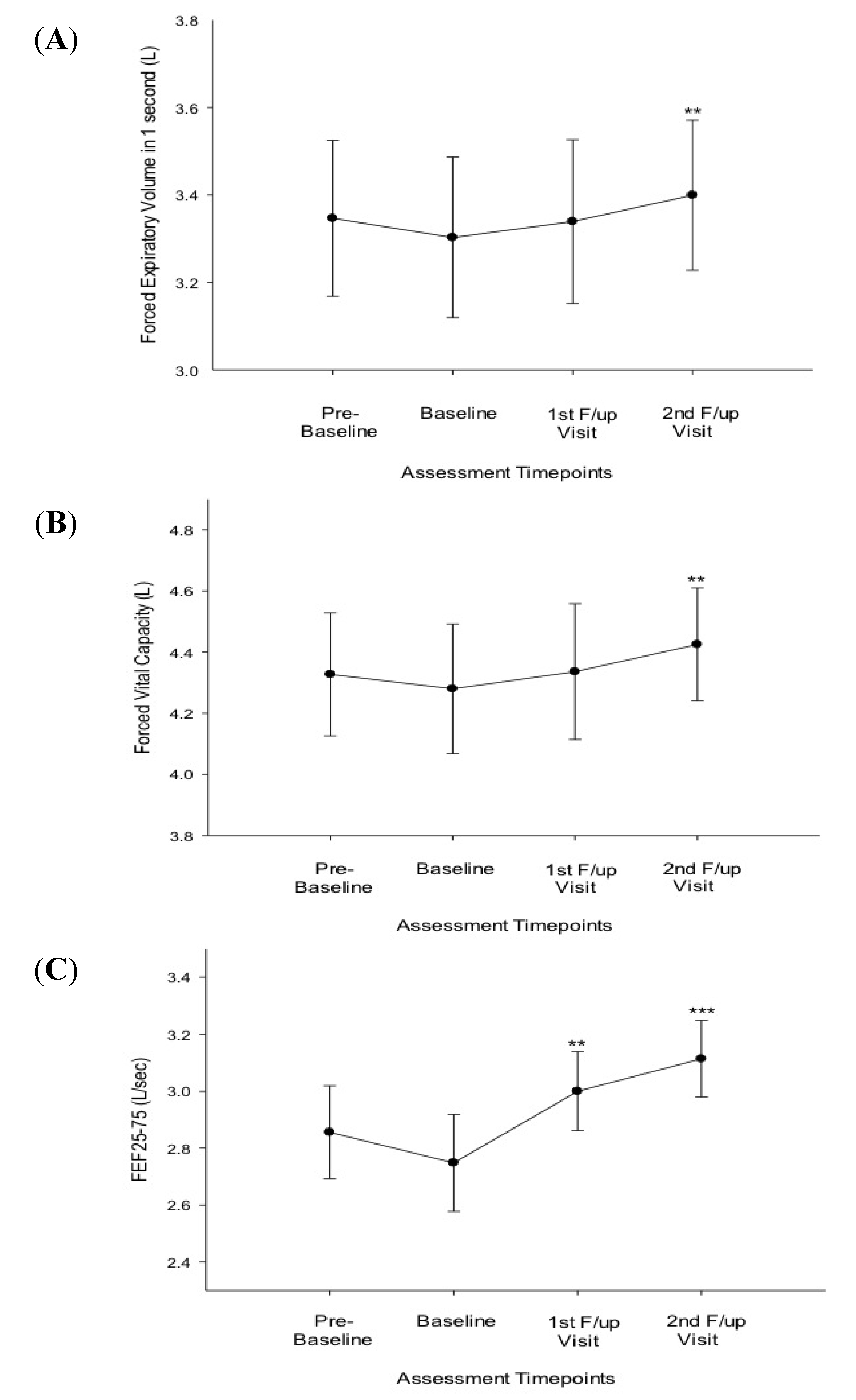 Notes: Compared to baseline significant p values of **—≤0.01, ***—≤0.001; All data expressed as mean and error bars are standard error of the mean; Abbreviations: F/up—follow-up; L—litres; L/sec.—litres per second. 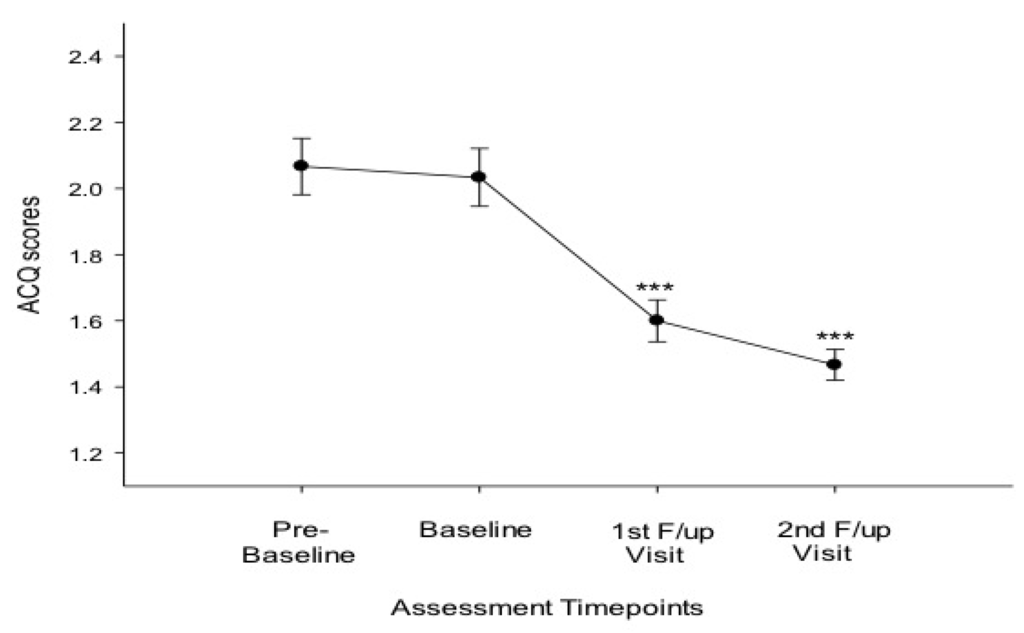 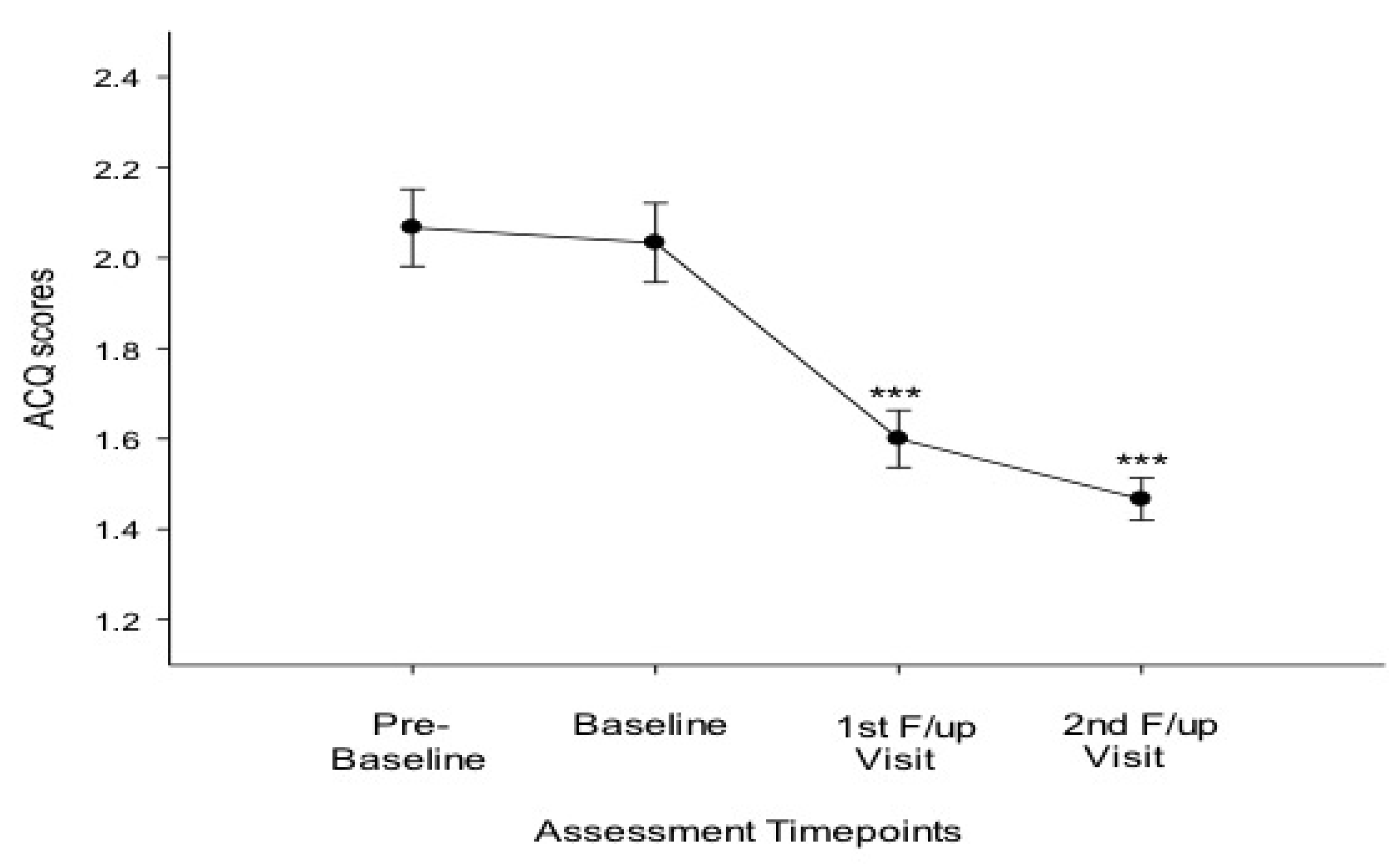 Notes: Compared to baseline significant p values of ***—≤0.001; All data expressed as mean and error bars are standard error of the mean; Abbreviations: F/up—follow-up. 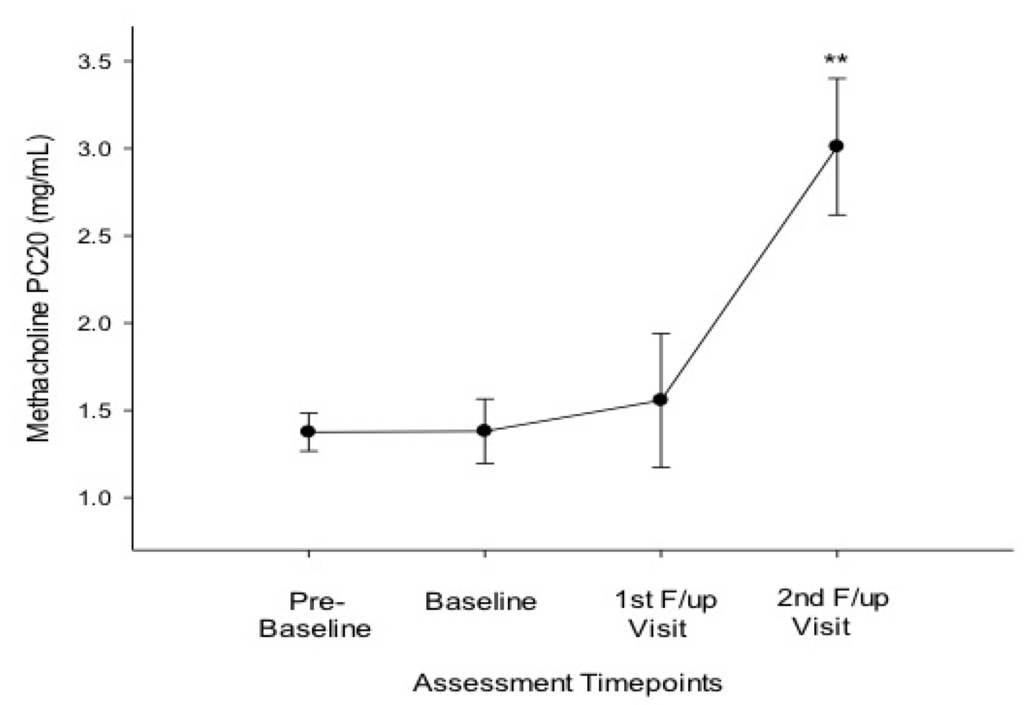 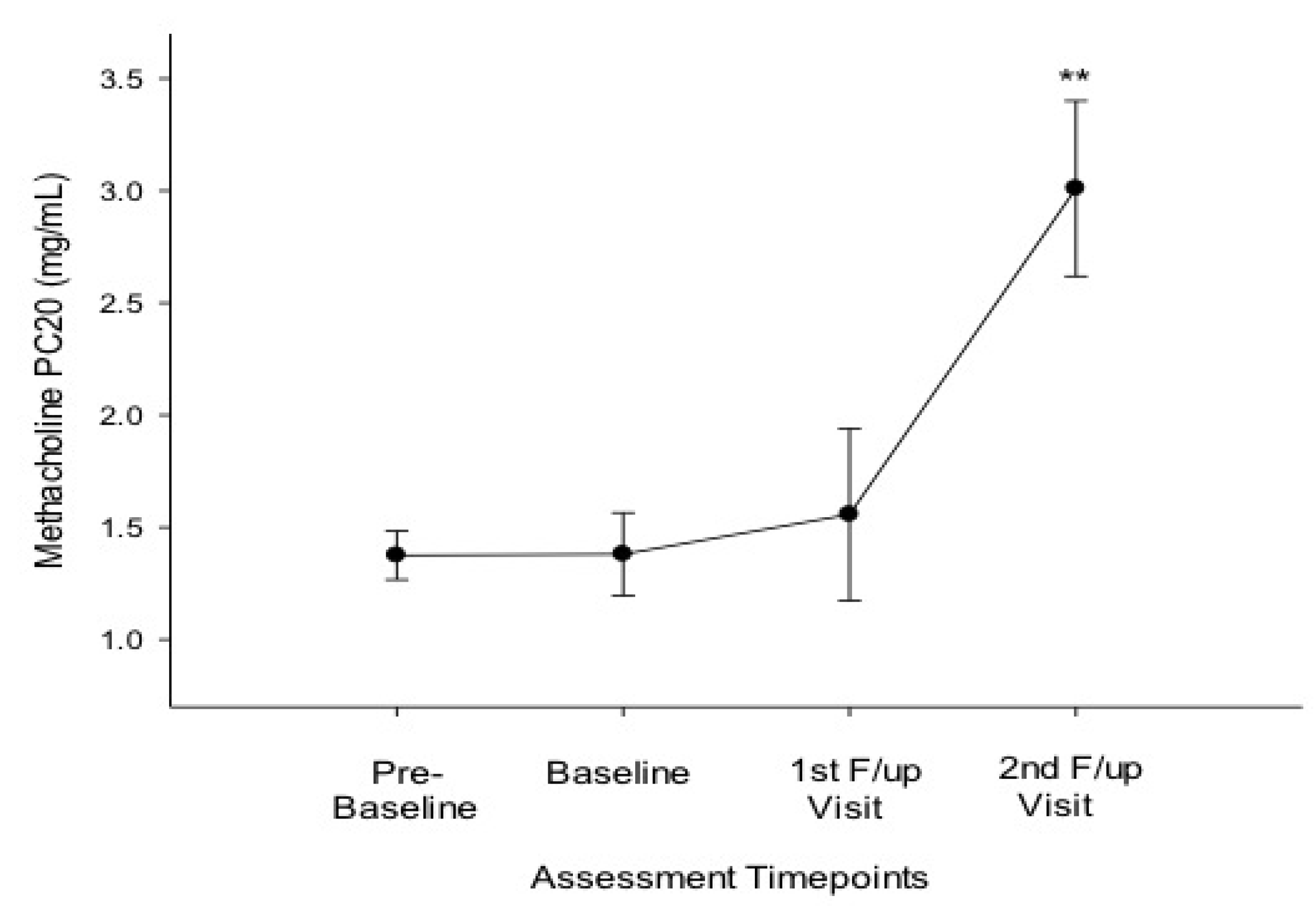 Notes: Compared to baseline significant p values of **—≤0.01. All data expressed as mean and error bars are standard error of the mean; Abbreviations: F/up—follow-up; mg/mL—milligram per millilitre.

No severe adverse reactions or acute exacerbation of asthma symptoms (i.e., cough, wheeze) were reported during period of observation with e-cig use. Overall, e-cig use appears to be well tolerated in these asthmatic patients with dry mouth and throat irritation being occasionally reported.

The e-cig may help smokers with asthma to reduce their cigarette consumption or remain abstinent and hence reduce the burden of smoking-related asthma symptoms. The positive findings observed with e-cigs allows us to advance the hypothesis that these products may be valuable for smoking cessation and/or tobacco harm reduction also in asthma patients who smoke. Large randomized controlled trials are now needed to confirm and expand these preliminary observations.