Mycotoxins’ Activity at Toxic and Sub-Toxic Concentrations: Differential Cytotoxic and Genotoxic Effects of Single and Combined Administration of Sterigmatocystin, Ochratoxin A and Citrinin on the Hepatocellular Cancer Cell Line Hep3B
Previous Article in Journal

Higher Household Income and the Availability of Electronic Devices and Transport at Home Are Associated with Higher Waist Circumference in Colombian Children: The ACFIES Study

Multidrug resistant (MDR) Acinetobacter baumannii is a major hospital-borne pathogen causing a wide spectrum of clinical conditions with significant mortality rates [1,2,3,4,5,6]. A. baumannii strains are equipped with a multitude of antibiotic resistance mechanisms rendering them resistant to most of the currently available antibiotics [1,3]. A. baumannii has a remarkable ability to persist for prolonged periods of time in the hospital environment in biofilms, thereby insulating it from disinfectants, and serving as a continuous source of infection [7,8,9,10,11]. In health-care environments, a variety of surfaces, including tabletops, bed rails, sinks, door handles, floors, mattresses, and pillows have been implicated as potential sources of A. baumannii [3,12].
Water and soil are considered as a major habitat for A. baumannii although the pathogen has been isolated from other sources, including foods, arthropods, animals, and humans [13,14,15,16,17]. Moreover, protozoans such as Acanthamoeba have been reported to support the growth of A. baumannii, and act as its reservoir in water [18]. Recently, studies indicating the potential presence of A. baumannii in water systems have been reported from multiple parts of the world [19,20]. The ability of A. baumannii to thrive in water may result in fatal infections in all age groups [21].
Chlorine has long been used as a disinfectant in drinking water and in swimming pools to inactivate pathogenic microorganisms, thereby making water safe for human use [22,23,24]. In the United States, the Environmental Protection Agency (EPA) recommends a maximum free chlorine level of 4 ppm in drinking water [25]. In addition to the standards described for chlorine in drinking water, the Centers for Disease Control and Prevention (CDC) have recommended 1–3 ppm free chlorine in swimming pool water for recreational purposes [26]. However, a variety of microorganisms have been recovered from drinking water distribution systems that maintained chlorine levels between 0.5–1.0 ppm, indicating that low levels of chlorine may not inactivate harmful microorganisms [27,28,29]. It is also reported that chlorine used in potable water and sewage can selectively promote the survival of antibiotic resistant bacteria [23,30,31,32]. For instance, drinking water with suboptimal levels of chlorine selectively supported the survival of multidrug resistant Pseudomonas aeruginosa [23].
Since A. baumannii could potentially contaminate drinking or recreational water, and chlorine at the recommended levels may not be effective in killing the pathogen, the current research investigated the viability of A. baumannii in water containing chlorine at the recommended levels for potable and recreational usage. In addition, the effect of chlorine on various antibiotic resistance genes in A. baumannii was investigated.

2.1. A. baumannii Strains and Growth Conditions

The effect of chlorine on A. baumannii viability in water was determined using a published protocol [33]. Deionized, non-chlorinated (EMD Millipore, Billerica, MA, USA) water was used for the study. For each experiment, different chlorine concentrations (0.2, 1, 2, 3 and 4 ppm) in water were achieved by adding a standard chlorine solution (Aqua Solutions, Deer Park, TX, USA) to pre-sterilized deionized water. The final concentration of free chlorine in water was confirmed using a digital titrator (Pocket colorimeterTMII, Hach, Loveland, CO, USA). One mL of A. baumannii suspension containing 109 CFU/mL was added to 99 mL of the sterile deionized water containing chlorine at the specified concentrations in a 200 mL Erlenmeyer flask. After thorough mixing, 1 mL samples were taken at 30, 60, 90 and 120 s, and transferred to 9.0 mL neutralizing broth for buffering chlorine (NB, Difco). Serial ten-fold dilutions in PBS were made and 0.1 mL of each dilution was surface plated on duplicate on TSA plates. The plates were incubated at 37 °C for 24 h. After enumeration of the colonies, the counts were expressed as log10 CFU/mL. The colonies on TSA were confirmed as A. baumannii by streaking on MDR and Leeds agar plates. Duplicate samples were included for each treatment and control, and the experiment was replicated three times.

Three selected strains of A. baumannii (ATCC 17978, 474030, 251847) were grown on MDR plates and sub cultured in TSB separately as before. The bacterial populations in the cultures were confirmed to contain ~8 log10 CFU/mL by plating appropriate dilutions on TSA. The overnight culture from this tube was centrifuged, washed twice, and reconstituted in PBS as described before. One mL of each of this reconstituted culture was transferred to tubes containing 9 mL of sterile deionized water containing 2 ppm of free chlorine. Tubes with no added chlorine served as control. The 2-ppm concentration was chosen for the RT-qPCR analysis since the United States Department of Health (USDH) recommends the free chlorine concentration range of 1 to 3 ppm to disinfect swimming pools [26]. Both set of tubes were incubated at 25 °C for 15 min. The bacterial culture from each tube was centrifuged at 12,000 × g for 2 min at 4 °C. The supernatant was discarded and the pellet was added with 0.5 mL of sterile water and 1 mL of RNA protect reagent (Qiagen, Valencia, CA, USA). The mixture was then incubated at 25 °C for 5 min. The RNeasy mini kit (Qiagen) was used for extracting total RNA from the control and chlorine-treated samples. The RNA was quantified using NanoDrop (ThermoFisher Scientific, Waltham, MA, USA) by measuring the absorbance at 260 and 280 nm. Super-script II reverse transcriptase kit (Invitrogen, Carlsbad, CA, USA) was used for cDNA synthesis from the extracted RNA.

The counts of A. baumannii in the control and treated samples were logarithmically transformed (log10 CFU/mL) to aid in statistical analysis. Since there was no significant difference in bacterial counts between the strains following exposure to chlorine treatment, the data from the eight strains were pooled and averaged. Data analysis was done using the PROC-MIXED procedure of statistical analysis software (SAS version 9.2; SAS Institute Inc., Cary, NC, USA). Fisher’s least significance test (LSD) was used to determine the differences between the means at a p level of ≤0.05.

3.1. Effect of Chlorine on A. baumannii Survival

In order to determine if A. baumannii survived the recommended levels of chlorine, we determined the survival of the pathogen exposed to 0 to 4 ppm of free chlorine for 30, 60, 90 and 120 seconds in deionized water. All eight A. baumannii controls where no chlorine was added yielded 107 CFU/mL bacteria at all the time points tested. Table 2 shows the results of A. baumannii counts as a mean of log CFU/mL and standard deviation of all the eight strains. When exposed to free chlorine levels ranging from 0.2 to 4 ppm, all the eight strains of A. baumannii survived with no significant decrease in their counts throughout the sampling period (p > 0.05).
Chlorine is generally used to disinfect both potable and recreational water with stipulated standards for inclusion as determined by the EPA and CDC. However, previous studies have indicated that chlorine was not completely effective in inactivating several pathogenic bacteria. For example, Yersinian enterocolitica, Yersinia pestis, Pasteurells multocida and Hafnia alvei were isolated from chlorine treated sewage water, indicating the inefficiency of chlorine in killing these pathogens [32]. In another study [33], an isolate of E.coli O157:H7 with tolerance of up to 2 ppm free chlorine treatment after one minute exposure, among six other isolates were tested in their study. In yet another study, Escherichia coli isolated from a chlorine-treated swimming pool were found to be resistant to chlorine for up to nine passages [36]. High tolerance of bacteria to disinfectants could either be intrinsic or resulting from mutation [37]. Additionally, wide spread use of disinfectants has been reported to trigger the selection of resistant strains [37].

Table 2. Effect of different concentrations of chlorine on the survival of A. baumannii in deionized water *.
Note: * Non significant at p > 0.05, ** mean and SD of all the eight strains of A. baumannii.

3.2. Effect of Chlorine on A. baumannii Antibiotic Resistance Genes 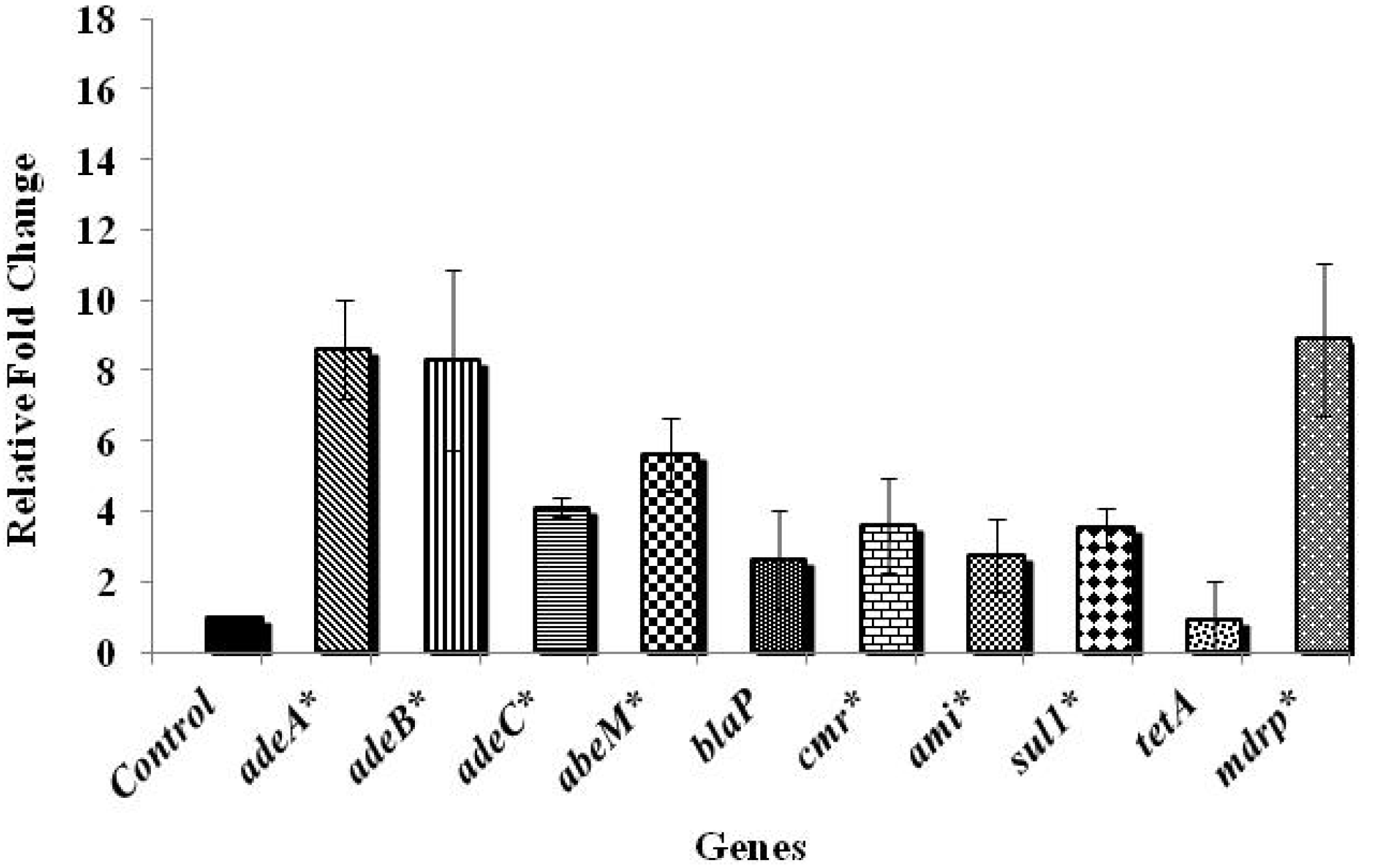 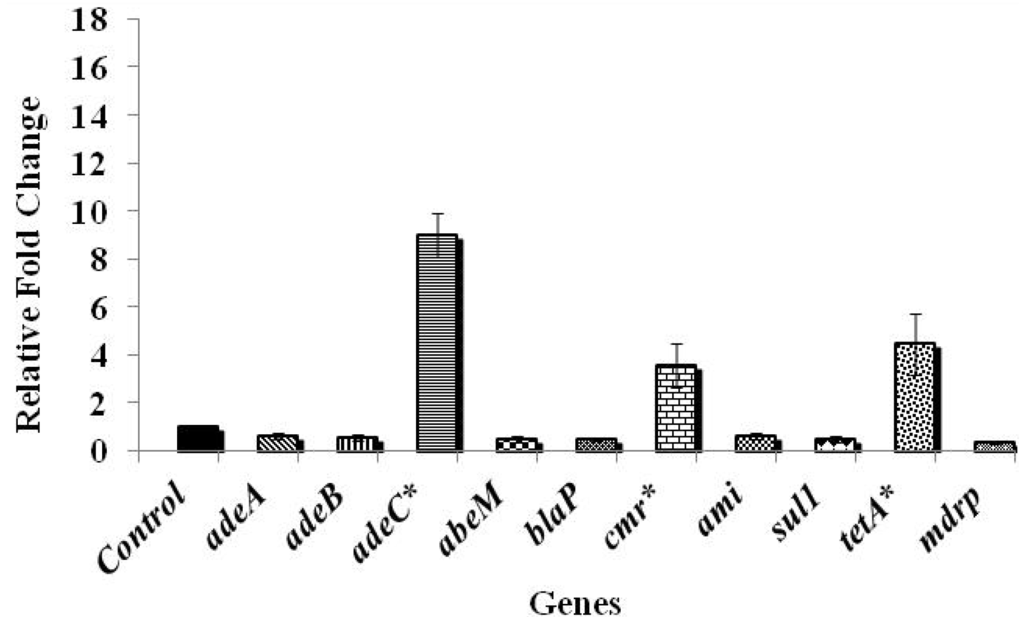 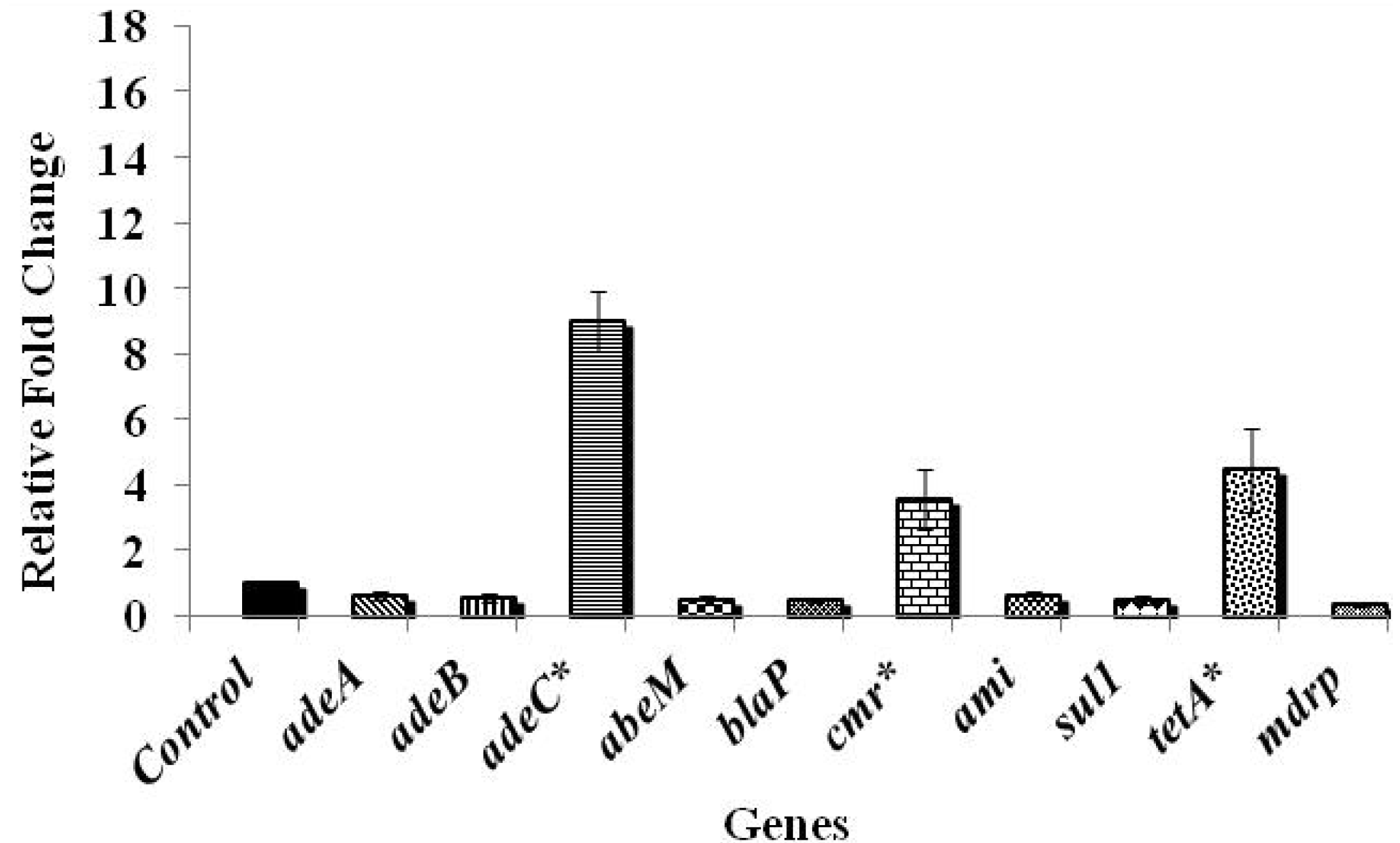 Note: * Genes significantly different from the control at p < 0.05.
Although preventative chlorine levels are in use, several reports suggest that chlorine at suboptimal levels could induce the expression of critical genes in pathogenic bacteria. Shi and coworkers reported that chlorine enhanced the expression of antibiotic resistance genes in diverse microbial populations isolated from drinking water [39]. Similarly, an increase in the expression of several antibiotic resistance genes was noted in E.coli and P. aeruginosa by other research groups [23,40]. It was observed that exposure to chlorine, induced a stress tolerance in bacteria making them more resistant to antibiotics [30,31]. It was also reported that chlorine exposure could induce over expression of efflux pumps resulting in the pumping out of disinfectants and antibiotics by bacteria [41]. 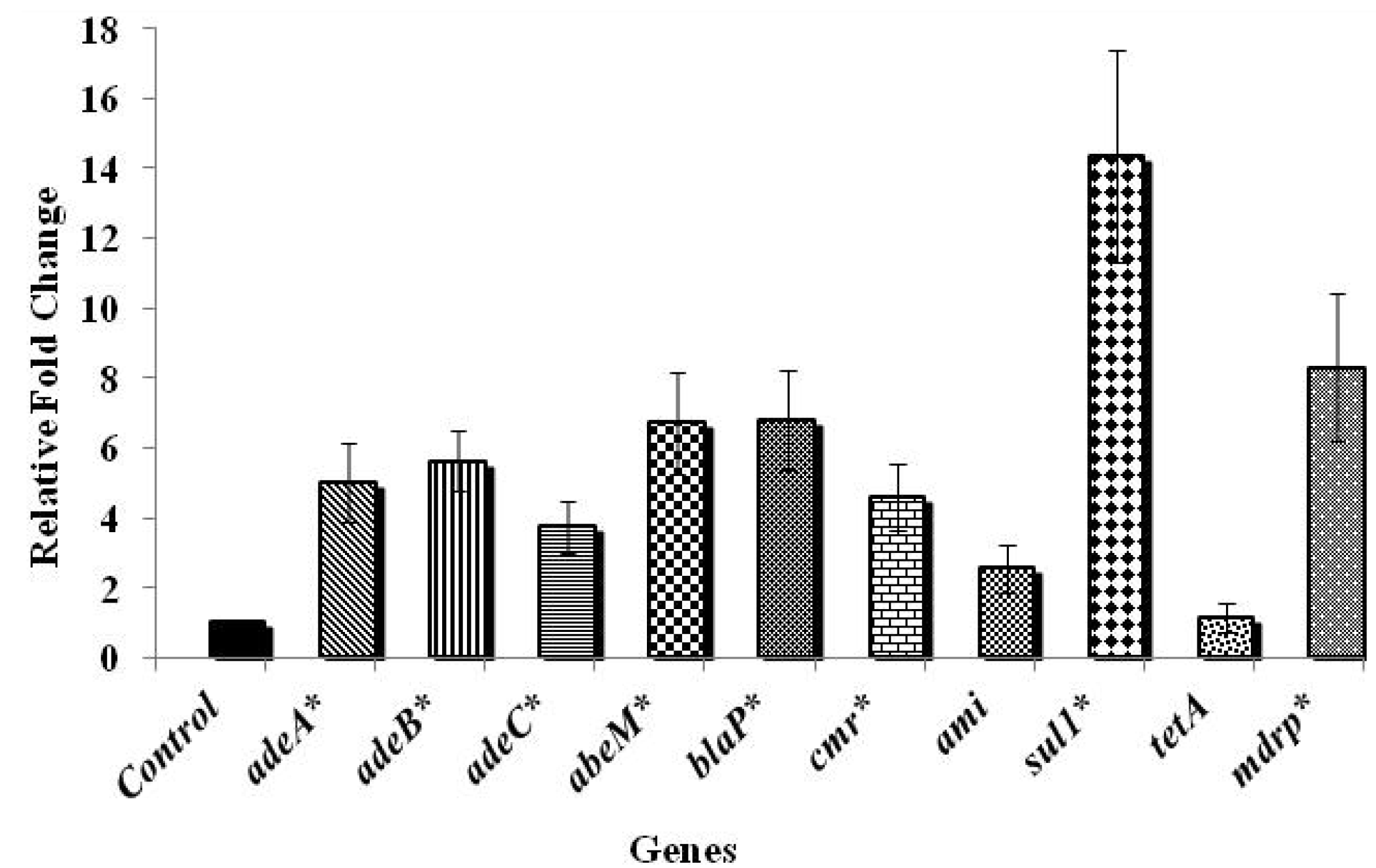 Note: * Genes significantly different from the control at p < 0.05.

The current investigation indicated that a free chlorine concentration of up to 4 ppm was not effective in killing multidrug resistant A. baumannii isolates. All the A. baumannii isolates were able to survive the recommended levels of chlorine in water. Further, chlorine exposure was found to increase the expression of efflux pumps and genes conferring resistance to chloramphenicol, sulphonamides, and beta-lactam group of antibiotics in A. baumannii. These observations indicate the inefficiency of currently used chlorine concentrations in killing A. baumannii in water, thereby warranting additional research and corrective measures. In addition, further studies are required to understand the mechanism behind chlorine-induced gene expression in A. baumannii, and its significance to public health.

The authors would like to sincerely thank Daryl Hoban and Meredith Hackel from International Health Management Associates (IHMA, Schaumburg, IL, USA) for providing us with the clinical isolates of A. baumannii from their culture collection.