The Case in Favor of E-Cigarettes for Tobacco Harm Reduction

Reasons for Starting and Stopping Electronic Cigarette Use

The aim of our study was to explore reasons for starting and then stopping electronic cigarette (e-cigarette) use. Among a national sample of 3878 U.S. adults who reported ever trying e-cigarettes, the most common reasons for trying were curiosity (53%); because a friend or family member used, gave, or offered e-cigarettes (34%); and quitting or reducing smoking (30%). Nearly two-thirds (65%) of people who started using e-cigarettes later stopped using them. Discontinuation was more common among those whose main reason for trying was not goal-oriented (e.g., curiosity) than goal-oriented (e.g., quitting smoking) (81% vs. 45%, p < 0.001). The most common reasons for stopping e-cigarette use were that respondents were just experimenting (49%), using e-cigarettes did not feel like smoking cigarettes (15%), and users did not like the taste (14%). Our results suggest there are two categories of e-cigarette users: those who try for goal-oriented reasons and typically continue using and those who try for non-goal-oriented reasons and then typically stop using. Research should distinguish e-cigarette experimenters from motivated users whose decisions to discontinue relate to the utility or experience of use. Depending on whether e-cigarettes prove to be effective smoking cessation tools or whether they deter cessation, public health programs may need distinct strategies to reach and influence different types of users.
Keywords: electronic cigarettes; e-cigarettes; tobacco use; smoking cessation electronic cigarettes; e-cigarettes; tobacco use; smoking cessation

The popularity of electronic cigarettes (e-cigarettes) in the United States has increased dramatically in recent years. Less than 1% of U.S. adults reported ever trying e-cigarettes in 2009 [1]; in 2013, 15% reported ever trying them [2]. Use of e-cigarettes by smokers is particularly high. In a 2013 national U.S. survey, half of smokers reported ever trying e-cigarettes, and 21% reported currently using them some days or every day [3]. Use by smokers is similarly high in other countries [4,5]. For instance, more than one-third (37%) of current smokers and recent ex-smokers in Great Britain reported ever use of e-cigarettes in 2012, and 21% currently used them [6].
Among the most common reasons for using e-cigarettes are believing they are healthier than regular cigarettes and can help smokers quit or reduce smoking [7]. Because e-cigarettes do not rely on combustion or contain cured tobacco, they produce far fewer harmful constituents than regular cigarettes [8]. However, some studies of e-cigarette aerosol and e-liquid have detected formaldehyde, nitrosamines, and other harmful constituents in amounts that varied considerably across brands, flavors, and models [9,10,11]. The extent to which e-cigarettes help smokers quit is still unclear [12,13,14]. One randomized-controlled trial found similar cessation success rates for e-cigarettes and the nicotine patch [15]. Some population-based studies indicate that e-cigarettes can help smokers quit [16], while others do not [17,18]. Other reported reasons for trying or using e-cigarettes are avoiding smoking restrictions [19,20,21], alleviating cravings for nicotine [20,22], enjoying the flavors [23], and preventing others’ exposure to cigarette smoke [21].
There is little research on stopping use of e-cigarettes outside of surveys with purposeful sampling of e-cigarette users from online forums [20,22] or smokers exiting tobacco shops [24]. It is important to understand why people stop using e-cigarettes for multiple reasons. First, e-cigarettes may provide an opportunity for harm reduction should nicotine-addicted smokers be willing to switch from regular cigarettes to non-combustible electronic ones. Only if switching is both successful and widespread would their use offer a net public health benefit. Second, understanding who stops using e-cigarettes and why allows researchers to distinguish among user types. Just as there are subtypes of cigarette smokers, like “social smokers” [25], subtypes of e-cigarette users may also exist. Reaching the right users with the right messages is critical for the success of any future public health campaigns focused on e-cigarettes. The aim of the present study was to investigate reasons for starting and stopping use of e-cigarettes and to examine differences in discontinuation by reason for trying among a large, population-based sample of U.S. adults.

This survey relied on data collected as part of the Tobacco Control in a Rapidly Changing Media Environment (TCME) study. The TCME project examined the relationship between recall of receiving tobacco-related information through multiple media channels and tobacco-related attitudes, beliefs, and behavior. In March 2013, 17,522 U.S. adult TCME participants completed an online survey. Most respondents (75%) were members of KnowledgePanel, a nationally representative online survey panel constructed using random-digit dialing, supplemented by address-based sampling to capture cell phone-only households. The remainder of the sample constituted members of a separate consumer survey panel recruited through online ads for joining the panel. The survey company screened individuals who were part of this consumer sample based on demographics and tobacco use behaviors and issued invitations to this survey in order to quota match with the KnowledgePanel sample. KnowledgePanel members received monthly compensation for being part of the panel (usually as points redeemable for $4–6 of goods) as well as entry into a sweepstakes with an additional cash or prize reward for completing this specific survey. Respondents from the separate consumer panel received points worth up to $2 for taking this survey. Before taking the survey, all participants provided consent online. Of the 34,097 KnowledgePanel members surveyed, 61% completed the screening; among those who were eligible (n = 13,531), 97% completed the survey. Response rates for the convenience sample cannot be calculated because there is no known sampling frame. For this study, we report data only from the 3878 participants who reported ever having tried an e-cigarette. Institutional review boards at the University of Illinois and the National Cancer Institute approved the study.

We examined bivariate associations between respondent characteristics and the three most common reasons for trying e-cigarettes using logistic regression. We included all statistically significant bivariate correlates (p < 0.05) in a multivariate model. We used the same procedure to examine associations between respondent characteristics and stopping use of e-cigarettes. To compare rates of discontinuation among those who tried e-cigarettes for goal-oriented vs. non-goal-oriented reasons, we conducted an additional logistic regression with discontinuation as the dependent variable and reason type (goal-oriented vs. non-goal-oriented) as the independent variable. Analyses were run in Stata Version 12. Frequencies are unweighted. Percentages and all other analyses used the “svy” command and post-stratification weights to adjust for the representativeness of the sample compared to the U.S. population and the sampling design, including the combination of probability and non-probability samples. Statistical tests were two-tailed with a critical alpha of 0.05. 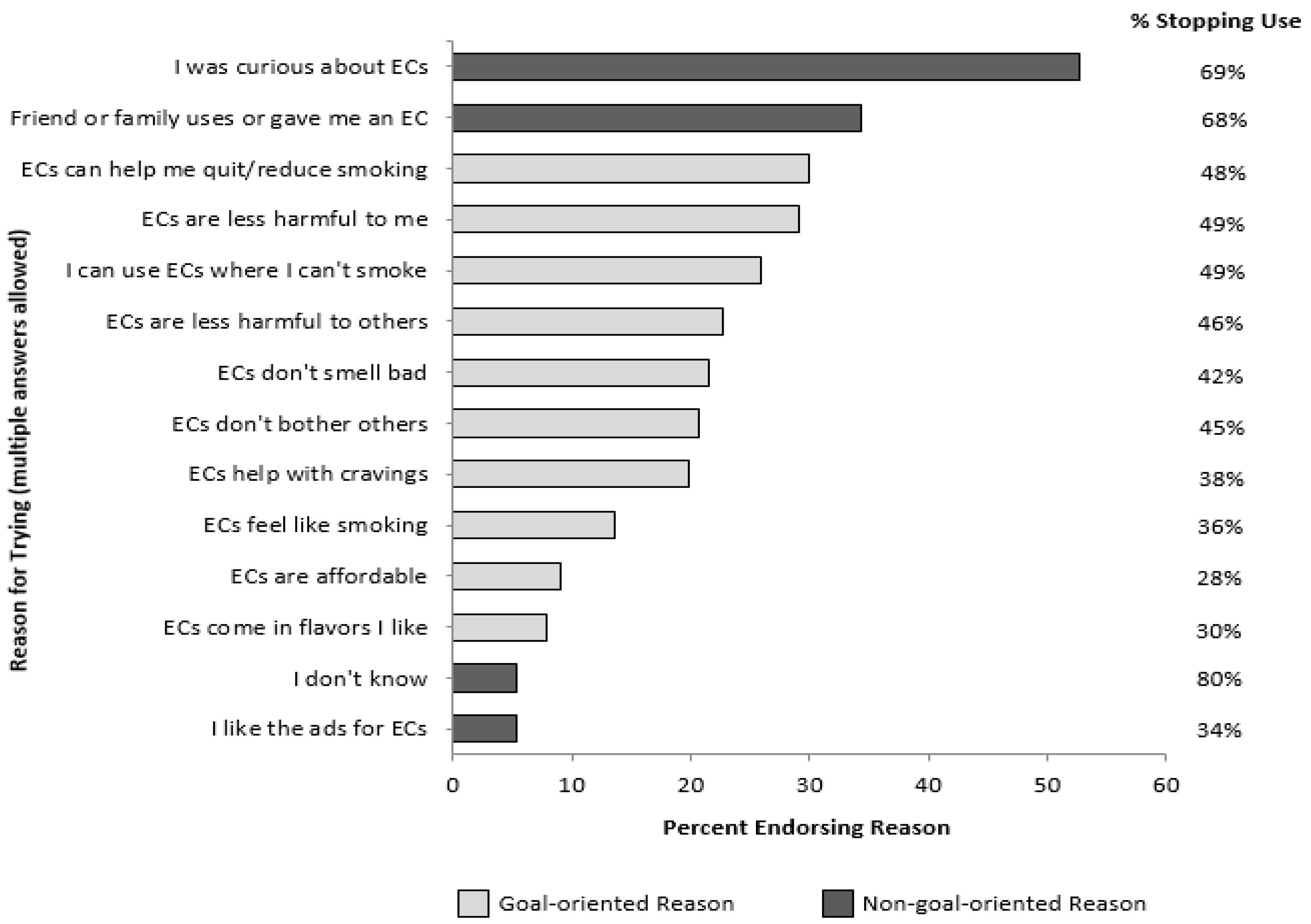 Few studies have examined reasons for stopping e-cigarette use, despite the fact that most of those who try e-cigarettes discontinue. Understanding these reasons has important public health implications if it helps to segment the population. Not all “ever e-cigarette users” are the same, just as not all cigarette smokers are the same. For example, tobacco control researchers emphasize the need to distinguish between “social smokers” who say they are not addicted to nicotine and those who self-categorize as nicotine-addicted smokers [25]. The extent to which e-cigarette users try the product because they are trying to achieve a goal like smoking cessation appears to be one driver of patterns of discontinuation. Specifically, those who try for goal-oriented reasons are more likely to continue using, but when they do stop using, they do so for reasons related to product satisfaction. If e-cigarettes are to serve as a harm reduction tool with an overall public health benefit, smokers who try for cessation and health-related reasons will need to be sufficiently satisfied with the product so that they switch completely and not merely experiment with it or engage in dual use. Segmentation between goal-oriented and non-goal-oriented users allows for health interventions to better target users’ needs and objectives and thus be more successful [43]. The type of future intervention efforts needed for adult e-cigarette users is uncertain, pending conclusive research on the controversial issue of whether the product can help with smoking cessation. However, even without such data, the need to prevent initiation among youth is clear. Future research should build on this study’s findings and explore adolescents’ and young adults’ reasons for starting and stopping e-cigarette use, as this could help to design programs that prevent e-cigarettes from serving as a gateway to future smoking.