Perinatal Outcomes of Uninsured Immigrant, Refugee and Migrant Mothers and Newborns Living in Toronto, Canada
Next Article in Special Issue

A History of Ashes: An 80 Year Comparative Portrait of Smoking Initiation in American Indians and Non-Hispanic Whites—the Strong Heart Study

Background: There is very little evidence globally on tobacco use and nicotine dependence among civilian populations affected by armed conflict, despite key vulnerability factors related to elevated mental disorders and socio-economic stressors. The study aim was to describe patterns of smoking and nicotine dependence among conflict-affected civilian men in the Republic of Georgia and associations with mental disorders. Methods: A cross-sectional household survey using multistage random sampling was conducted in late 2011 among conflict-affected populations in Georgia. Respondents included in this paper were 1,248 men aged ≥18 years who were internally displaced persons (IDPs) and former IDPs who had returned in their home areas. Outcomes of current tobacco use, heavy use (≥20 cigarettes per day), and nicotine dependence (using the Fagerström Test for Nicotine Dependence) were used. PTSD, depression, anxiety and hazardous alcohol use were also measured, along with exposure to traumatic events and a range of demographic and socio-economic characteristics. Results: Of 1,248 men, 592 (47.4%) smoked and 70.9% of current smokers were heavy smokers. The mean nicotine dependence score was 5.0 and the proportion with high nicotine dependence (≥6) was 41.4%. In multivariate regression analyses, nicotine dependence was significantly associated with PTSD (β 0.74) and depression (β 0.85), along with older age (except 65+ years), and being a returnee (compared to IDPs). Conclusions: The study reveals very high levels of heavy smoking and nicotine dependence among conflict-affected persons in Georgia. The associations between nicotine dependence, PTSD and depression suggest interventions could yield synergistic benefits. View Full-Text
Keywords: tobacco; nicotine; Georgia; war; forced displacement tobacco; nicotine; Georgia; war; forced displacement
►▼ Show Figures 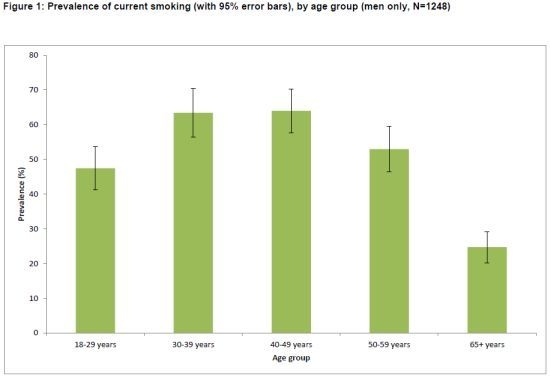