Using Formative Research to Design a Behavior Change Strategy to Increase the Use of Improved Cookstoves in Peri-Urban Kampala, Uganda
Previous Article in Journal

In the aftermath of the Icelandic volcano Grimsvötn’s eruption on 21 May 2011, volcanic ash reached Northern Europe. Elevated levels of ambient particles (PM) were registered in mid Sweden. The aim of the present study was to investigate if the Grimsvötn eruption had an effect on mortality in Sweden. Based on PM measurements at 16 sites across Sweden, data were classified into an ash exposed data set (Ash area) and an unexposed data set (No ash area). Data on daily all-cause mortality were obtained from Statistics Sweden for the time period 1 April through 31 July 2011. Mortality ratios were calculated as the ratio between the daily number of deaths in the Ash area and the No ash area. The exposure period was defined as the week following the days with elevated particle concentrations, namely 24 May through 31 May. The control period was defined as 1 April through 23 May and 1 June through 31 July. There was no absolute increase in mortality during the exposure period. However, during the exposure period the mean mortality ratio was 2.42 compared with 2.17 during the control period, implying a relatively higher number of deaths in the Ash area than in the No ash area. The differences in ratios were mostly due to a single day, 31 May, and were not statistically significant when tested with a Mann-Whitney non-parametric test (p > 0.3). The statistical power was low with only 8 days in the exposure period (24 May through 31 May). Assuming that the observed relative differences were not due to chance, the results would imply an increase of 128 deaths during the exposure period 24–31 May. If 31 May was excluded, the number of extra deaths was reduced to 20. The results of the present study are contradicting and inconclusive, but may indicate that all-cause mortality was increased by the ash-fall from the Grimsvötn eruption. Meta-analysis or pooled analysis of data from neighboring countries might make it possible to reach sufficient statistical power to study effects of the Grimsvötn ash on morbidity and mortality. Such studies would be of particular importance for European societies preparing for future large scale volcanic eruptions in Iceland. View Full-Text
Keywords: air pollution; particulate matter; volcano; mortality; ash; Iceland; Grimsvötn air pollution; particulate matter; volcano; mortality; ash; Iceland; Grimsvötn
►▼ Show Figures 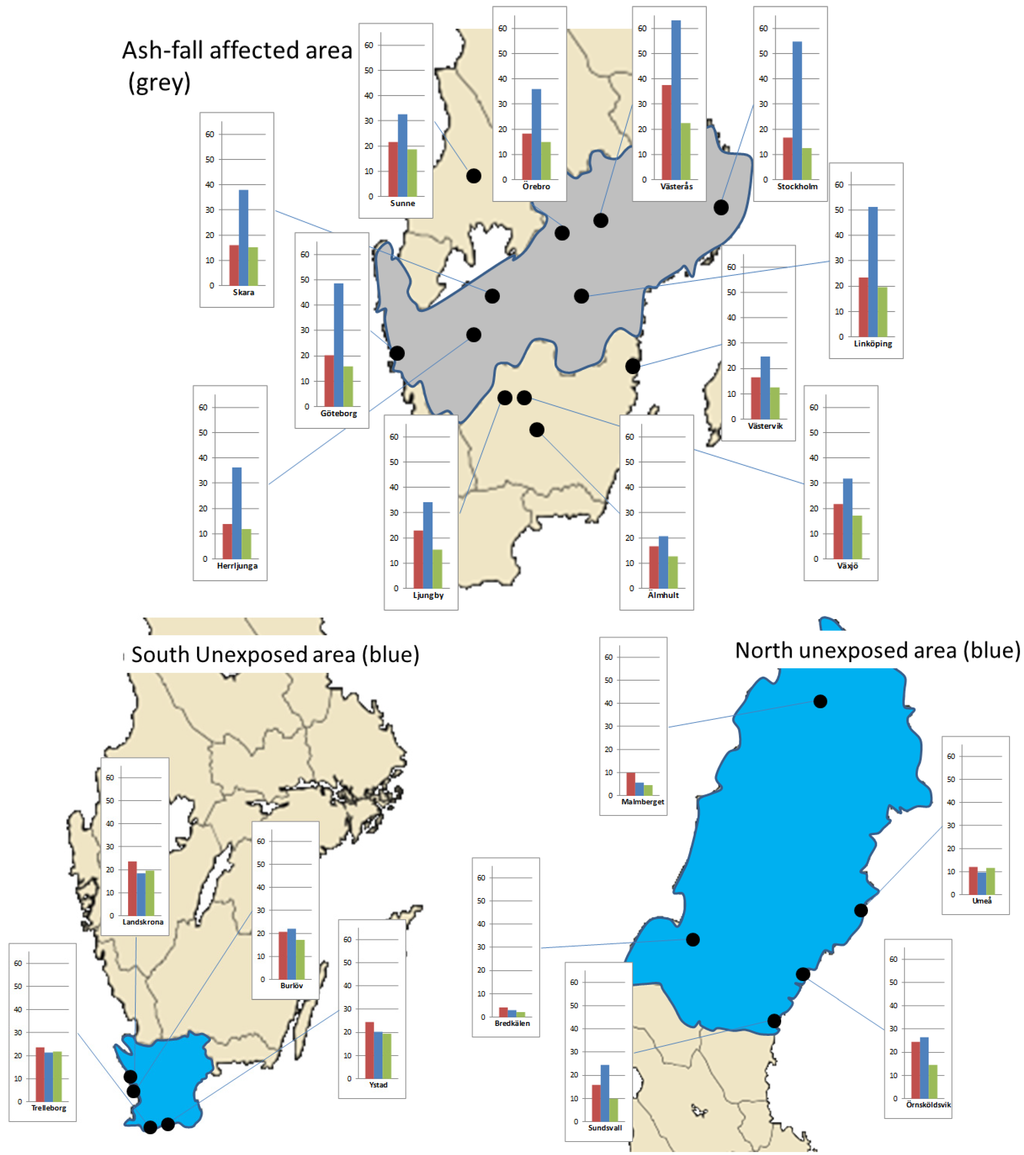 
Oudin A, Carlsen HK, Forsberg B, Johansson C. Volcanic Ash and Daily Mortality in Sweden after the Icelandic Volcano Eruption of May 2011. International Journal of Environmental Research and Public Health. 2013; 10(12):6909-6919.