In this study, we elucidated the inhibitory effect of fucoidan from marine brown algae on the lipid accumulation in differentiated 3T3-L1 adipocytes and its mechanism. The treatment of fucoidan in a dose-dependent manner was examined on lipid inhibition in 3T3-L1 cells by using Oil Red O staining. Fucoidan showed high lipid inhibition activity at 200 µg/mL concentration (P < 0.001). Lipolytic activity in adipocytes is highly dependent on hormone sensitive lipase (HSL), which is one of the most important targets of lipolytic regulation. Here, we examined the biological response of fucoidan on the protein level of lipolysis pathway. The expressed protein levels of total hormone sensitive lipase (HSL) and its activated form, phosphorylated-HSL were significantly increased at concentration of 200 µg/mL fucoidan. Furthermore, insulin-induced 2-deoxy-D-[3H] glucose uptake was decreased up to 51% in fucoidan-treated cells as compared to control. Since increase of HSL and p-HSL expression and decrease of glucose uptake into adipocytes are known to lead to stimulation of lipolysis, our results suggest that fucoidan reduces lipid accumulation by stimulating lipolysis. Therefore, these results suggest that fucoidan can be useful for the prevention or treatment of obesity due to its stimulatory lipolysis.
Keywords: marine brown algae; lipid inhibition; lipolysis; hormone sensitive lipase marine brown algae; lipid inhibition; lipolysis; hormone sensitive lipase

Obesity is a chronic metabolic disorder caused by an imbalance between energy intake and expenditure. It has become a major obstacle of improving human health and life quality due to the known risk factors for many chronic diseases. It is characterized by hyperplasia and hypertrophy, and is regarded as a major factor for cardio-metabolic disturbances such as hypertension, atherosclerosis, type 2 diabetes and dyslipidemia [1–3]. In general, obesity is associated with the extent of adipocyte differentiation, intracellular lipid accumulation and lipolysis [4,5].
Marine brown algae have long made up a key part of the Asian diet and are also consumed in other parts of the world. It has often been used as a food for people who are sick and has been credited with health-giving properties. Today, marine brown algae supplements for human use are usually considered to be sources of therapeutic benefits [6]. Especially, Fucoidan is a sulfated fucose containing polysaccharide extracted from marine brown algae [7]. During the past years, fucoidan extracted from various species has been recognized to possess biological properties; anti-coagulant, anti-thrombotic, anti-tumor, anti-inflammatory and anti-virus activities [8]. The anti-coagulant activity of sulfated polysaccharide from Fucus evanescens was similar to that of heparin. Anti-coagulant properties of fucoidan are determined by thrombin inhibition mediated via plasma antithrombin III [9]. Fucoidan from Mekabu, a dietary alga, exerts anti-tumor activity possibly through enhancing the Th1 cell and NK cell responses [10]. Fucoidan, a sulfated polysaccharide isolated from an edible brown alga Undaria pinnatifida, was shown to be a potent inhibitor of the in vitro replication of herpes simplex virus type 1 (HSV-1) [11–13].
Recently, there has been increasing interest in potential biological activity against fat inhibition from fucoidan, which is an adipogenic reduction of fucoidan-declined lipid accumulation in adipocytes. Fucoidan can be used for inhibiting fat accumulation, which is mediated by decreasing aP2, ACC, and PPARγ gene expression [14]. Fucoidan treatment inhibits adipocyte differentiation, evidenced by decreased lipid accumulation and down regulation of adipocyte markers via mitogen-activated protein kinase (MAPK) signaling pathways. As of yet, however, no study has clearly investigated the inhibitory effects of fucoidan on lipid accumulation through the regulation of lipolysis. Lipolysis is a prerequisite for lipid accumulation via the regulation of hormone sensitive lipase (HSL) as a rate limiting enzyme, which is the hydrolysis of triglycerides into free fatty acids.
In this study, we examined whether fucoidan from Fucus vesisulosus inhibits lipid accumulation in 3T3-L1 adipocytes via the stimulation of lipolysis. First, we quantified the accumulation of lipid droplets in 3T3-L1 cells in a dose-dependent manner using Oil Red O staining. Second, we showed the stimulatory effect of fucoidan on the protein expression of HSL and its activated form, p-HSL by western blotting assay, which function as the key rate-limiting enzyme on lipolysis. Furthermore, we examined insulin-induced glucose uptake into 3T3-L1 adipocytes as a measure of lipolytic effect of fucoidan. Finally, we confirmed inhibitory effect of fucoidan on triglyceride accumulation in 3T3-L1 cells. As a result, we demonstrated that fucoidan may reduce lipid accumulation through the stimulation of lipolysis and may be a candidate for an anti-obesity agent.

Lipolytic activity in adipocytes is highly dependent on hormone sensitive lipase (HSL), which is one of the most important targets of lipolytic regulation. The subsequent phosphorylation and activation of HSL result in an increase of the hydrolysis of stored triacylglycerol into mono-acylglycerol and free fatty acids [15–17]. To evaluate the effect of fucoidan on the regulation of lipolysis, we investigated the protein level of HSL and phosphorylated HSL (p-HSL) by western blotting analysis. In fully differentiated 3T3-L1 adipocytes, fucoidan treatment at 200 μg/mL increased HSL and p-HSL level by approximately 1.47 and 1.59 times as compared to the controls (Figures 4A,B). Kim group reported that the treatment of gensonosides or EGCG prevented obesity via the up-regulated expression of HSL mRNA [18]. Cha group showed that methanol extract from Luffa cylindrical (LCM) stimulates the lipolysis through the induction of HSL resulting in the reduced lipid accumulation [19]. Therefore, our results suggest that fucoidan may induce lipolysis by increasing the protein levels of HSL and p-HSL.

3T3-L1 preadipocyte cells purchased from ATCC (Manassas, VA, USA) were cultured, maintained and stimulated to differentiate as described previously [16]. Cells were initially maintained in DMEM with 10% BCS, and 1% (v/v) penicillin-streptomycin (100 units/mL penicillin and 100 μg/mL streptomycin) at 37 °C in 5% CO2. At 2 days post-confluence, 3T3-L1 cell differentiation was induced by treating confluent cells with a hormone mixture containing 10% FBS, 10 μg/mL insulin, 0.5 mM IBMX and 0.5 μM DEX. To investigate the effects of fucoidan on fully differentiated adipocytes, fucoidan concentrations of 0, 5, 10, 50, 100 and 200 μg/mL were applied to the cells. Two days later, the medium was placed into DMEM supplemented with only 10 μg/mL insulin and 10% FBS. The same concentrations of fucoidan were supplemented at two-day intervals when the culture medium was replenished. After adipocyte differentiation, the cells were stained with Oil Red O staining, which is an indicator of cell lipid content. Cells were washed with phosphate-buffered saline, fixed with 10% buffered formalin and stained with Oil Red O solution (0.5 g in 100 mL isopropanol) for 1 h and observed under a microscope. For quantification, the staining solution was removed, the dye retained in the cells was eluted into isopropanol, and OD500 was determined using a spectrophotometer (UVIKON XS, SECOMAM, France).

Cultured differentiated cells were lysed in an ice-cold lysis buffer (1 M Tris, 5 M NaCl, 100% NP-40, 1 M NaF, 100 mM Na2NO4, 100 mM EDTA). Cell lysate was separated via electrophoresis on an 8% SDS-polyacrylamide gel, followed by electrophoretic transfer to a Hybond-P PVDF membrane. The samples were and blocked with 5% skim milk in TBS with 0.1% Triton X-100 (TBS-T) for 120 min at room temperature. The membranes were then incubated overnight with anti-HSL and anti-phospho-HSL antibodies (1:1000 dilution, Cell signaling) in TBS-T at 4 °C. After incubation with horseradish peroxidase, anti-rabbit IgG antibody (1:2500, Cell signaling) was conjugated for 1 h at room temperature. For normalization, the membranes were reprobed with antibodies against β-actin (1:5000 dilution, Santa Cruz Biotechnology). Several exposure times were used to obtain the signals in the linear range.

Glucose uptake activity was analyzed by measuring the uptake of 2-deoxy-d-[3H] glucose, as described previously. 3T3-L1 cells plated in a 24 well plate were washed three times with PBS and incubated in 1 mL/well warm PBS containing 10 μg/mL insulin for 30 min at 37 °C. After washing twice in PBS, the cells were incubated in 1mL low glucose DMEM containing cytochalasin B or fucoidan and 2-deoxy-d-[3H] glucose. After 30 min, glucose uptake was terminated by washing the cells three times with cold PBS. The cells were lysed with 0.1 mL of 1% SDS per well at RT for 10 min. The radioactivity retained by the cell lysates was determined using a scintillation counter (1450 MicroBeta TriLux, USA).

3T3-L1 adipocytes, cultured with fucoidan at 200 μg/mL in each well of 6 well plates for 8 days, were harvested in 300 μL of 1% triton X-100 and then centrifuged. The triglyceride contents of the cell lysates were analyzed by using the TG-S reaction kit (Asan Pharm. Co., Seoul, Korea) according to the manufacturer’s instructions.

This work was supported by grant no. 2007-2000091 from Nuclear R&D Program of Ministry of Education, Science and Technology, Korea. 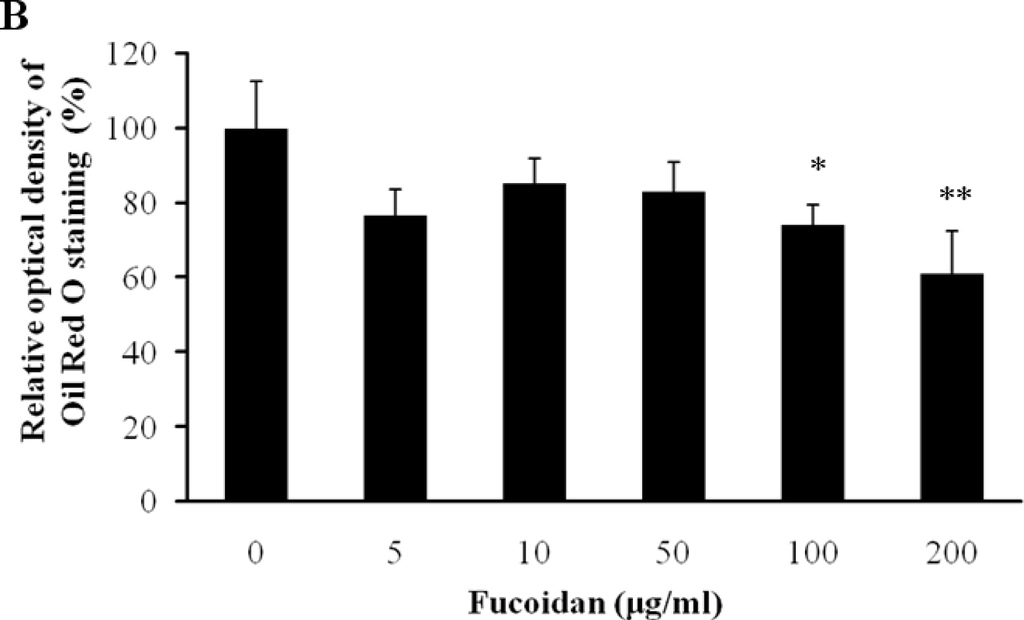 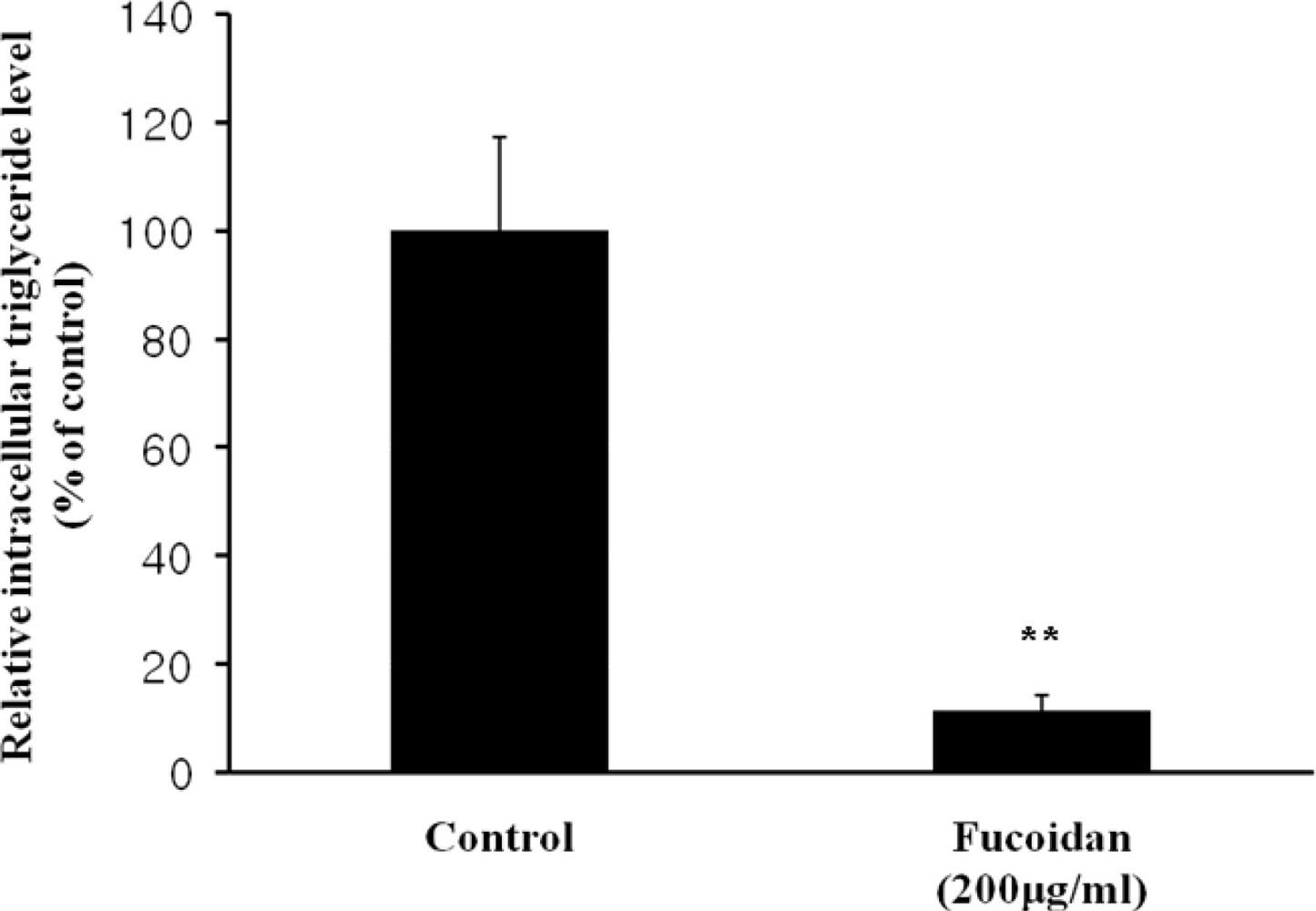 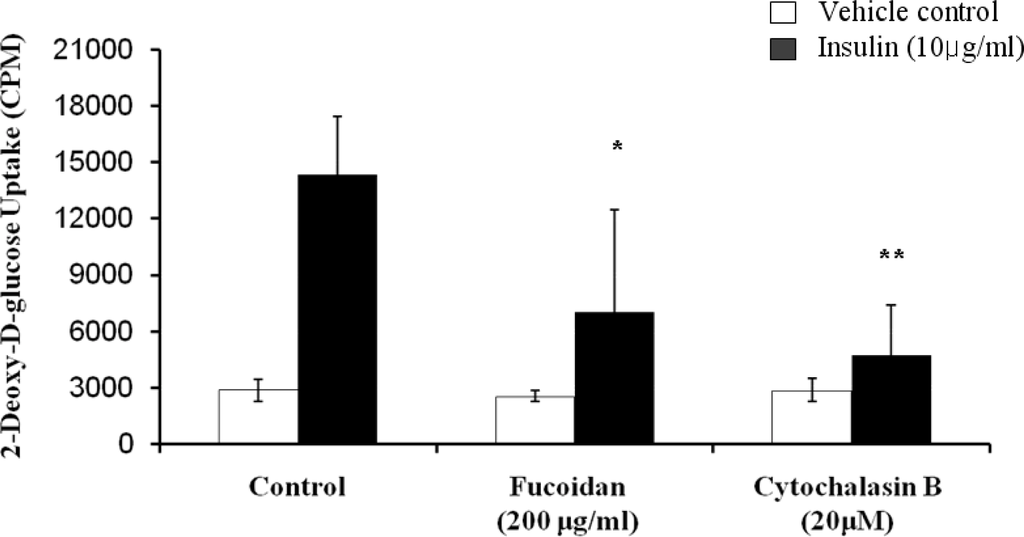