Glucosamine hydrochloride (GlcN) and N-acetyl-d-glucosamine (GlcNAc) are components of glycosaminoglycan now widely used as dietary supplements [1]. Moreover, GlcN is useful for the treatment of joint diseases both in humans and in veterinary medicine, including dogs and horses [2,3]. The bioavailability of GlcN has been reported as 26% in humans [4], 19% in rats [5], 12% in dogs [6], and 2–6.1% in horses [7–9]. These results suggest the presence of a species-specific difference in GlcN absorption and metabolism. Different biological activities between GlcN and GlcNAc have also been demonstrated in vitro. For example, differences in GlcN and GlcNAc uptake and their subsequent effects on glucose transport, glucose transporter (GLUT) expression, and sulfated glycosaminoglycans (sGAG) and hyaluronan synthesis have been reported [10].
In an experimental rabbit model of cartilage injury, oral administration of GlcN or GlcNAc led to regeneration of both glycosaminoglycan and proteoglycan [11,12]. GlcN has the potential to exert chondroprotective action on an experimentally induced osteoarthritis by inhibiting type II collagen degradation and enhancing type II collagen synthesis in the articular cartilage [13]. These results suggested that synthesis of type II collagen and proteoglycan core protein as well as glycosaminoglycan occurs upon GlcN and GlcNAc supplementation. However, no reports to date have investigated the relationship between oral administration of amino monosaccharide and amino acid synthesis.
The aim of this study was to examine the effects of oral GlcN and GlcNAc administration on plasma free amino acid (PFAA) concentrations. Using dogs, we investigated (PFAA) dynamics after oral administration of GlcN, GlcNAc, or glucose (Glc), which are the sources of glycosaminoglycan and proteoglycan in the body.

Three healthy beagle dogs, mean age of 4 years (range 2–6 years) and mean body weight 9 kg (range 7–12 kg). The use of these animals and the procedures they underwent were approved by the Animal Research Committee of Tottori University.

Dogs were separated into the following groups (n = 3 for each group): usual dog food (Hill’s-Colgate (Japan) Ltd, Science Diet, Tokyo, Japan) (Control), usual dog food plus GlcN, usual dog food plus GlcNAc, and usual dog food plus Glc. Each saccharide dissolved in water was orally administered at approximately 500 mg/kg to dog. Dog’s blood was collected (0 h) in the morning before being fed, then 35 kcal/kg body weight dog food with each saccharide dissolved in 10 mL water (500 mg/kg body weight, single dose) was fed (10 mL water for control group) (first feeding). After blood collection at 1, 2, 4, and 6 h, all the dogs were fed with 35 kcal/kg dog food without saccharide (second feeding), and the blood was collected 18 h after second feeding.
Blood was collected from the jugular vein using heparin as an anti-coagulant. The blood was centrifuged at 3,000 rpm for 10 min, and the plasma was then separated promptly and frozen at −80 °C until measurement of PFAA concentrations.

Plasma samples were mixed with equal volumes of 3% (w/w) sulfosalicylic acid, and left to stand at 4 °C for 1 h. Samples were then centrifuged (4 °C, 15 min, 1,500 rpm), and precipitated protein was removed. The amino acid concentrations were measured by an automatic amino acid analyzer (JLC-500/V2, AminoTac; JEOL, Tokyo, Japan). The amino acids measured are listed in Table 1.

GlcN or GlcNAc dissolved in water was orally administered at approximately 300 mg/kg to dogs (n = 3 in each group). Blood samples were collected before administration and 0.5, 1, 2, 4, and 24 h after administration. Blood was collected from the jugular vein using heparin as an anti-coagulant. The blood was centrifuged at 3,000 rpm for 10 minutes, and the plasma was then separated promptly. Plasma samples were mixed with four equal volumes of ethanol and centrifuged, and precipitated protein was removed. These samples were treated using a p-ethyl 4-aminobenzoate carbohydrate chain labeling kit (Seikagaku Kogyo, Tokyo, Japan). Samples were analyzed quantitatively using high performance liquid chromatography fitted with a reversed-phase column (Honenpak C18, 75 mm × 4.6 mm I.D.) and fluorometer (Ex. 305 nm, Em. 360 nm).

In this study, we investigated differences in plasma amino acid dynamics after oral administration of GlcN, GlcNAc and Glc to dogs. Our results indicate that oral administration in dogs of GlcN or Glu, but not GlcNAc, lowers the levels of some free amino acids in plasma. This result indicates that further work is warranted to determine the significance of this finding for the impact of these dietary supplements on amino acid metabolism and utilization. 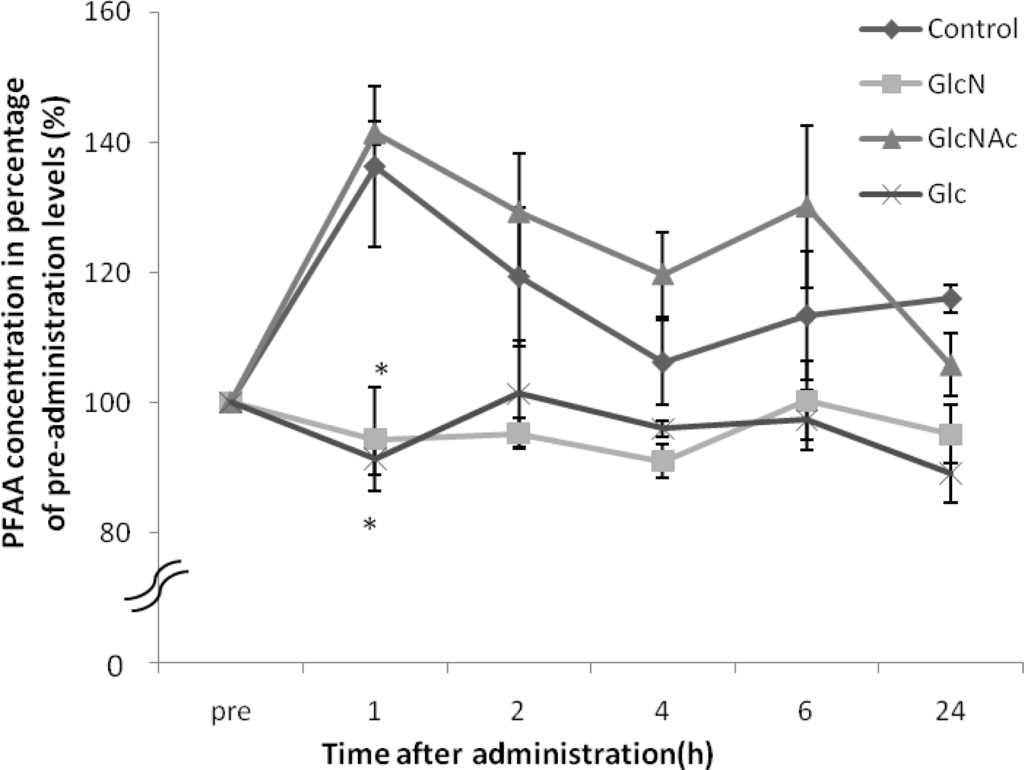 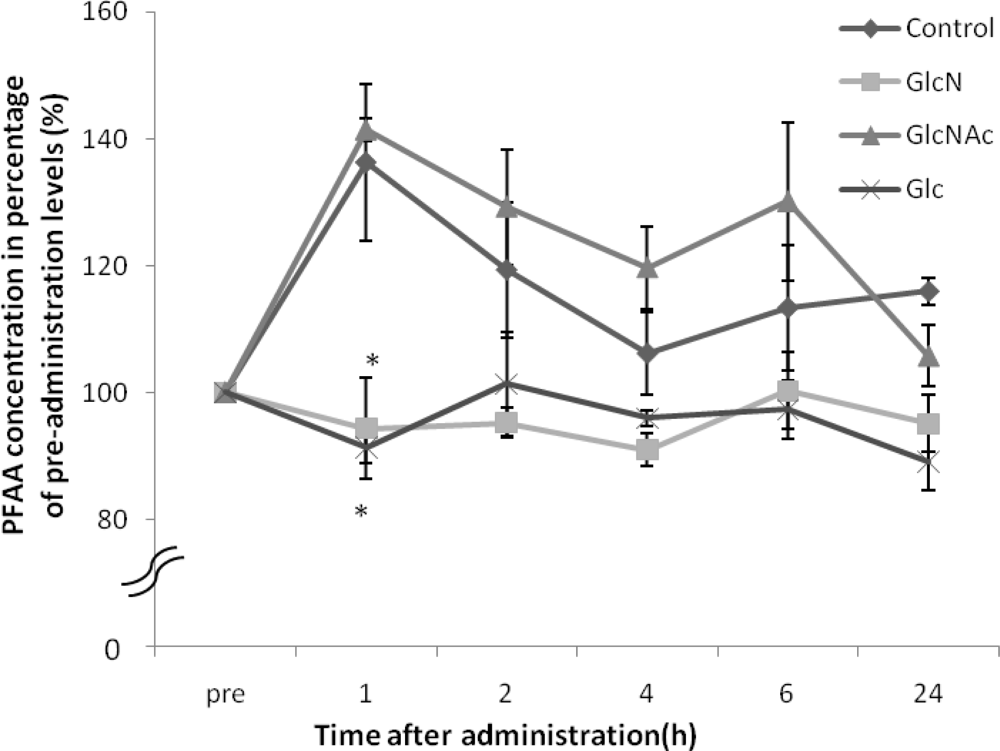 Table 2. Significant changes in serum amino acid concentrations at 1 h after administration of each saccharide (GlcN, GlcNAc, and Glc) to dogs.
Each plasma free amino acid concentration pre-administration was considered as 100%.
*:p < 0.05, compared to the levels of the GlcNAc or the control at 1 h after administration. Data represent the mean ± SE of three dogs in each group. Control dogs were fed only dog food, and the other dogs were fed dog food supplemented with each saccharide.