Anti-Inflammatory Activity of Chitooligosaccharides in Vivo

Many marine bacteria produce exopolysaccharides (EPS) as a strategy for growth, adhering to solid surfaces, and to survive adverse conditions. There is growing interest in isolating new EPS producing bacteria from marine environments, particularly from extreme marine environments such as deep-sea hydrothermal vents characterized by high pressure and temperature and heavy metal presence. Marine EPS-producing microorganisms have been also isolated from several extreme niches such as the cold marine environments typically of Arctic and Antarctic sea ice, characterized by low temperature and low nutrient concentration, and the hypersaline marine environment found in a wide variety of aquatic and terrestrial ecosystems such as salt lakes and salterns. Most of their EPSs are heteropolysaccharides containing three or four different monosaccharides arranged in groups of 10 or less to form the repeating units. These polymers are often linear with an average molecular weight ranging from 1 × 105 to 3 × 105 Da. Some EPS are neutral macromolecules, but the majority of them are polyanionic for the presence of uronic acids or ketal-linked pyruvate or inorganic residues such as phosphate or sulfate. EPSs, forming a layer surrounding the cell, provide an effective protection against high or low temperature and salinity, or against possible predators. By examining their structure and chemical-physical characteristics it is possible to gain insight into their commercial application, and they are employed in several industries. Indeed EPSs produced by microorganisms from extreme habitats show biotechnological promise ranging from pharmaceutical industries, for their immunomodulatory and antiviral effects, bone regeneration and cicatrizing capacity, to food-processing industries for their peculiar gelling and thickening properties. Moreover, some EPSs are employed as biosurfactants and in detoxification mechanisms of petrochemical oil-polluted areas. The aim of this paper is to give an overview of current knowledge on EPSs produced by marine bacteria including symbiotic marine EPS-producing bacteria isolated from some marine annelid worms that live in extreme niches. View Full-Text
Keywords: chemical composition; exopolysaccharides; extremophiles; marine bacteria; biological activity chemical composition; exopolysaccharides; extremophiles; marine bacteria; biological activity
►▼ Show Figures 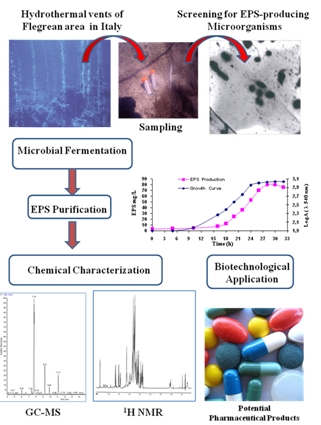