Primary Screening of the Bioactivity of Brackishwater Cyanobacteria: Toxicity of Crude Extracts to Artemia salina Larvae and Paracentrotus lividus Embryos
Next Article in Special Issue

Cylindrospermopsin: A Decade of Progress on Bioaccumulation Research
Previous Article in Journal

With the aim of investigating whether yessotoxin (YTX) is responsible for diarrhetic shellfish poisoning (DSP) events in Croatian waters, three different methods were combined: a modified mouse bioassay (MBA) that discriminates YTX from other DSP toxins, the enzyme-linked immunosorbent assay method (ELISA) and liquid chromatography-mass spectrometry (LC-MS/MS). Among 453 samples of mussels and seawater analyzed in 2007, 10 samples were DSP positive. Results obtained by the modified MBA method revealed that most of the samples were positive for YTX, with the exception of samples from Lim Bay (LB 1) The ELISA method also identified the presence of YTX in these samples. DSP toxin profiles showed the presence of okadaic acid (OA) in three, and YTX in four out of nine samples that were analyzed by LC-MS/MS. The phytoplankton community structure pattern revealed Lingulodinium polyedrum (Stein) Dodge, which was present in the water prior to and/or during toxicity events at low concentrations (80 to 1440 cells L-1), as a potential YTX producing species. It is proposed that L. polyedrum cells accumulated in mussels and the subsequently observed toxicity may be related to metabolism after ingestion, resulting in carboxy YTX as the major analog in the mussel.
Keywords: yessotoxin; okadaic acid; Lingulodinium polyedrum; Dinophysis fortii; Adriatic Sea yessotoxin; okadaic acid; Lingulodinium polyedrum; Dinophysis fortii; Adriatic Sea

Microscopic planktonic algae are critical food for filter-feeding shellfish including oysters, mussels, scallops and clams. In most cases, intensive proliferation of phytoplankton cells (so-called algal blooms; up to millions of cells per liter) is beneficial for aquaculture and fishery harvesting. However, in some situations, algal blooms can cause severe damage to aquaculture and can have an adverse impact on human health. Among the 5000 species of extant marine phytoplankton according to Sournia et al. [1], there are about 80 species that have the capacity to produce potent toxins [2], which can, through the food web, have a negative impact on human health and cause a variety of gastrointestinal and neurological illnesses. There are several types of toxicity, which are divided by the symptoms they cause in sea mammals and humans. In Croatian waters, only toxins associated with Diarrheic Shellfish Poisoning (DSP) have been identified to date in concentrations that can impact on human health [3,4].
The first record was during the summer of 1989 on the north-west coast of the Adriatic Sea when the presence of dinoflagellates genera Dinophysis and Prorocentrum resulted in shellfish intoxication with Diarrheic Shellfish Poisoning (DSP) [5]. Subsequent DSP episodes in Croatian waters have been reported. The occurrence of DSP toxicity in the middle Adriatic was first registered in the summer of 1993 in Kaštela Bay [6] and has been repeatedly observed [7,8]. The National monitoring program of shellfish breeding areas has revealed that most of the DSP events have occurred in the northern Adriatic [3,9].
The DSP toxins are all heat-stable polyether and lipophilic compounds that have been isolated from various species of shellfish and dinoflagellates [10]. Originally they were comprised of three groups of polyether toxins because they often co-occur and their toxins are coextracted in the same lipophilic fraction from plankton cells and shellfish. The first group, comprising acidic toxins, includes okadaic acid (OA) and its derivatives named dinophysistoxins (DTXs). The second group, comprising neutral toxins, consists of polyether-lactones of the pectenotoxin group (PTXs), while the third group includes a sulfated compound called yessotoxin (YTX), a brevetoxin-type polyether, and its derivative 45-hydroxyyessotoxin (45-OH-YTX) [10,11]. Nowadays, it is known that these three groups of toxins have different biological effects. YTXs are nondiarrheagenic, and compared to OA show a much lower potency for the inhibition of protein phosphatase 2A. For this reason, it has been proposed that YTXs should not be included in the list of DSP toxins.
DSP toxin profiles in Croatian waters have shown that OA was only occasionally the main toxin causing DSP toxicity events [3,9]. In most cases where DSP toxicity in shellfish was detected by mouse bioassay, OA was not present in sufficient concentrations to account for the recorded toxicity [6–8]. These findings imply that an unidentified DSP compound might have contributed to the toxic effect. Since YTX occurrence in shellfish from the middle Adriatic has been reported [12] as well as the presence of the dinoflagelate Lingulodinium polyedrum that is known to produce yessotoxin, we hypothesized that YTX could be the toxin responsible for most of the DSP toxicity events in Croatian waters. With the aim of investigating whether YTX is responsible for most of the DSP events in Croatian waters we combined a modified Yasumoto’s method, which allows us to extract YTX among other DSP toxins [13,14] with LC-MS/MS analysis of these lipophilic toxins.

In the frame of the National Monitoring Programme of Shellfish Farms, both seawater and shellfish sampling were carried out monthly in the period from November to March and weekly in the period from April to October. In 2007, 453 samples, collected at 19 stations including the Istrian area, Šibenik Bay and Mali Ston Bay, were analyzed. In this paper mouse bio-assay positive DSP results obtained in 2007 were analyzed. Stations where positive results were recorded are shown in Figure 2.

Analyses of DSP toxicity by the mouse bio-assay were performed according to Yasumoto [13]. In the period from 20 August to 08 November 2007 a modified method [14], which allowed the differentiation of YTX positive results from other DSP positive results, was used.

Samples of shellfish were prepared for analysis immediately upon arrival in the laboratory or frozen until analysis. The shellfish were cleaned with fresh water. Each specimen was opened by cutting the adductor muscles, sand or other foreign material was removed and the meat transferred from the shell to a strainer to drain for several minutes. The strained meat was homogenized by blender or Ultraturrax, and a weight of approximately 100 g was used for analysis.

Shellfish tissue (2 g) was homogenized, using a Polytron homogeniser (2 min, 10,000 rpm), in 18 mL 90% methanol. The homogenate was centrifuged at 3,000 rpm for 10 minutes at room temperature. The supernatant was retained for analysis.
The assay was calibrated using a standard solution of YTX supplied in the ELISA kit from Biosense laboratories (Bergen, Norway).

Further investigations on those samples that gave positive results by the MBA for lipophilic toxins were carried out by liquid chromatography tandem mass spectrometry. Homogenized mussel tissues were extracted once with methanol 90% (sample to solvent ratio = 10). Extracts were then washed with n-hexane and filtered before injection into the LC. LC-MS/MS analyses were performed using a 1200 L triple quadrupole mass spectrometer equipped with an electrospray ionization source (Varian Inc., Walnut Creek, CA, USA).

The hydrolysis procedure, as proposed by Mountfort et al. (2001) with slight modifications, was carried out by adding 125 μL of 2.5 M NaOH (100% aqueous) to 1 mL of sample crude extract. The mixture was kept at 76 °C for 40 min. After cooling to room temperature, the extract was acidified with 110 μL of 2.5 M HCl. The pH values of each extract after hydrolysis and addition of HCl ranged between 5.0 and 7.0, depending on the matrix.

Phytoplankton community structure was determined according to Utermöhl [28]. Phytoplankton samples were collected by both net and vertical PVC sampler. The net (upper diameter 29 cm, 20 μm mesh size) was towed vertically from the bottom to the surface. The results were expressed as N cells m−2. Samples collected by vertical PVC sampler were expressed as N cells L−1.

This report confirms YTXs, in addition to OA, as the main compounds responsible for the toxicity of lipophilic extracts of mussels (M. galloprovincialis) from Croatian waters. For the first time, this work highlights the YTX profile and reveals carboxy YTX as a major analog present in the examined mussels. At the same time, the concentration of YTXs producers in seawater is relatively low, which suggests that such toxins had accumulated in mussels in the period prior to collection. This is supported by the evidence that the oxidation products of YTX/homo YTX in mussels (carboxy YTX and its homo derivatives) are present in higher amounts than YTX/homo YTX themselves. Results obtained by three different methods (MBA, ELISA and LC-MS/MS) indicate that the ELISA method is the most sensitive for YTXs. 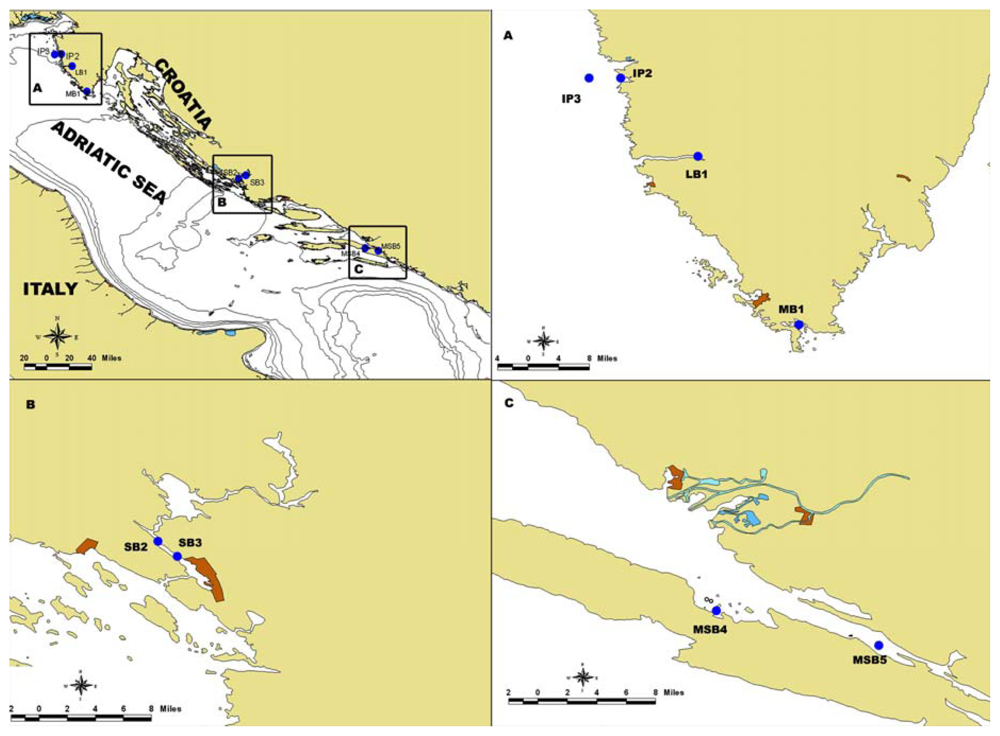 Table 1. Dates and stations with positive mouse bioassay (MBA) for DSP in 2007 using Yasumoto’s method [13] and YTXs concentrations by ELISA.
n.a. not analyzed.

Table 2. Dates and stations with positive mouse bioassay for DSP and YTX in the period from 20 August to 22 October 2007 using both Yasumoto’s method [13] and a modified version of Yasumoto’s method, which discriminated YTX from others DSP [14], and YTXs concentrations by ELISA).
n.a. not analyzed.

© 2010 by the authors; licensee Molecular Diversity Preservation International, Basel, Switzerland This article is an open-access article distributed under the terms and conditions of the Creative Commons Attribution license (http://creativecommons.org/licenses/by/3.0/).