Red alga species belonging to the Porphyra and Pyropia genera (commonly known as Nori), which are widely consumed and commercialized due to their high nutritional value. These species have a carotenoid profile dominated by xanthophylls, mostly lutein and zeaxanthin, which have relevant benefits for human health. The effects of different abiotic factors on xanthophyll synthesis in these species have been scarcely studied, despite their health benefits. The objectives of this study were (i) to identify the abiotic factors that enhance the synthesis of xanthophylls in Porphyra/Pyropia species by conducting a systematic review and meta-analysis of the xanthophyll content found in the literature, and (ii) to recommend a culture method that would allow a significant accumulation of these compounds in the biomass of these species. The results show that salinity significantly affected the content of total carotenoids and led to higher values under hypersaline conditions (70,247.91 µg/g dm at 55 psu). For lutein and zeaxanthin, the wavelength treatment caused significant differences between the basal and maximum content (4.16–23.47 µg/g dm). Additionally, in Pyropia spp., the total carotenoids were considerably higher than in Porphyra spp.; however, the lutein and zeaxanthin contents were lower. We discuss the specific conditions for each treatment and the relation to the ecological distribution of these species. View Full-Text
Keywords: abiotic factors; carotenoids; lutein; Porphyra; Pyropia; xanthophylls; zeaxanthin abiotic factors; carotenoids; lutein; Porphyra; Pyropia; xanthophylls; zeaxanthin
►▼ Show Figures 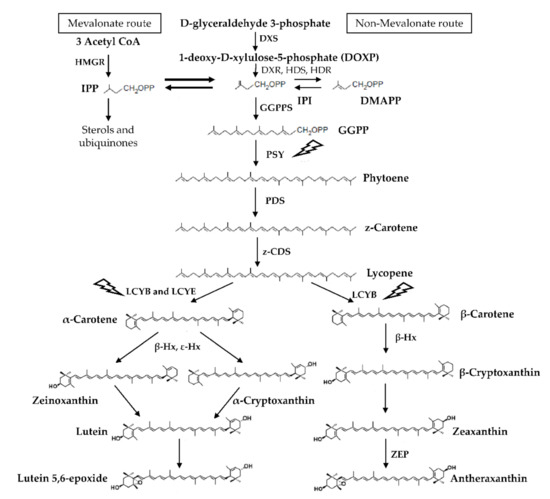