Astaxanthin as a Putative Geroprotector: Molecular Basis and Focus on Brain Aging
Previous Article in Journal

Astaxanthin from H. pluvialis is an antioxidant and presents a promising application in medicine for human health. The two-stage strategy has been widely adopted to produce astaxanthin by the Haematococcus industry and research community. However, cell death and low astaxanthin productivity have seriously affected the stability of astaxanthin production. This study aims to test the effect of cell transformation strategies on the production of astaxanthin from H. pluvialis and determine the optimal initial biomass density (IBD) in the red stage. The experimental design is divided into two parts, one is the vegetative growth experiment and the other is the stress experiment. The results indicated that: (1) the cell transformation strategy of H. pluvialis can effectively reduce cell death occurred in the red stage and significantly increase the biomass and astaxanthin production. (2) Compared with the control group, the cell mortality rate of the red stage in the treatment group was reduced by up to 81.6%, and the biomass and astaxanthin production was increased by 1.63 times and 2.1 times, respectively. (3) The optimal IBD was determined to be 0.5, and the highest astaxanthin content can reach 38.02 ± 2.40 mg·g−1. Thus, this work sought to give useful information that will lead to an improved understanding of the cost-effective method of cultivation of H. pluvialis for natural astaxanthin. This will be profitable for algal and medicine industry players. View Full-Text
Keywords: Haematococcus pluvialis; astaxanthin; encystment; cell transformation; initial biomass density Haematococcus pluvialis; astaxanthin; encystment; cell transformation; initial biomass density
►▼ Show Figures 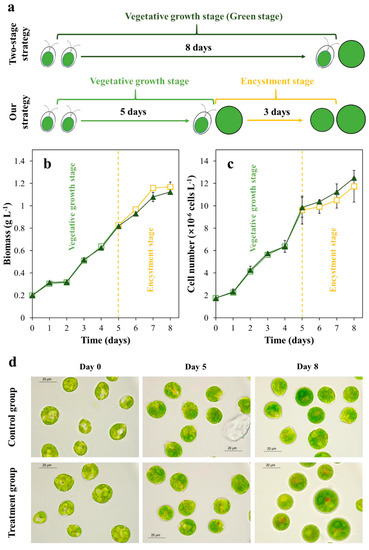