Isolation and Characterization of a Novel Cold-Active, Halotolerant Endoxylanase from Echinicola rosea Sp. Nov. JL3085T
Next Article in Special Issue

In Vitro and In Vivo Assessment of the Efficacy of Bromoageliferin, an Alkaloid Isolated from the Sponge Agelas dilatata, against Pseudomonas aeruginosa
Previous Article in Journal

The neurotoxic non-protein amino acid β-N-methylamino-l-alanine (BMAA) is connected to the development of neurodegenerative diseases. BMAA has been shown to accumulate in aquatic ecosystems, and filter-feeding molluscs seem particularly susceptible to BMAA accumulation. The blue mussels farmed along the Swedish coastline in the Baltic Sea are, due to their small size, exclusively used to produce feed for chicken and fish in the agro–aqua cycle. We have investigated the possible biotransfer of BMAA from mussels, via mussel-based feed, into chickens. Chickens were divided into two groups, the control and the treatment. BMAA was extracted from the muscle, liver, brain, and eye tissues in both chicken groups; a UPLC-MS/MS method was subsequently used to quantify BMAA. The results indicate detectable concentrations of BMAA in both chicken groups. However, the BMAA concentration in chicken was 5.65 times higher in the treatment group than the control group, with the highest concentration found in muscle tissue extracted from the treatment group chickens. These data suggest that there is a BMAA transfer route within the agro-aqua cycle, so further investigation is recommended before using mussel-based feed in the chicken industry. View Full-Text
Keywords: β-N-methylamino-l-alanine; Baltic Sea; mussel; chicken; bioaccumulation; agro–aqua cycle β-N-methylamino-l-alanine; Baltic Sea; mussel; chicken; bioaccumulation; agro–aqua cycle
►▼ Show Figures 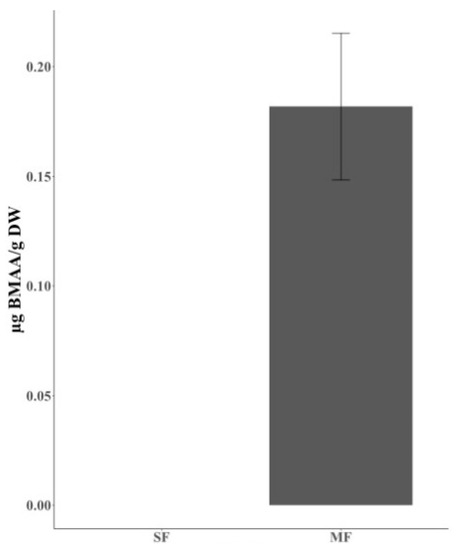