Marine and Freshwater Feedstocks as a Precursor for Nitrogen-Containing Carbons: A Review

Photosynthetic species of the genus Dinophysis are obligate mixotrophs with temporary plastids (kleptoplastids) that are acquired from the ciliate Mesodinium rubrum, which feeds on cryptophytes of the Teleaulax-Plagioselmis-Geminigera clade. A metabolomic study of the three-species food chain Dinophysis-Mesodinium-Teleaulax was carried out using mass spectrometric analysis of extracts of batch-cultured cells of each level of that food chain. The main goal was to compare the metabolomic expression of Galician strains of Dinophysis acuminata and D. acuta that were subjected to different feeding regimes (well-fed and prey-limited) and feeding on two Mesodinium (Spanish and Danish) strains. Both Dinophysis species were able to grow while feeding on both Mesodinium strains, although differences in growth rates were observed. Toxin and metabolomic profiles of the two Dinophysis species were significantly different, and also varied between different feeding regimes and different prey organisms. Furthermore, significantly different metabolomes were expressed by a strain of D. acuminata that was feeding on different strains of the ciliate Mesodinium rubrum. Both species-specific metabolites and those common to D. acuminata and D. acuta were tentatively identified by screening of METLIN and Marine Natural Products Dictionary databases. This first metabolomic study applied to Dinophysis acuminata and D.acuta in culture establishes a basis for the chemical inventory of these species. View Full-Text
Keywords: Dinophysis physiology; lipophilic toxins; non-targeted analysis; metabolomics Dinophysis physiology; lipophilic toxins; non-targeted analysis; metabolomics
►▼ Show Figures 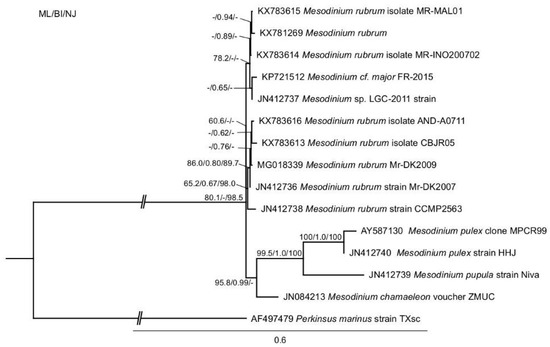